The art of teaching

The challenge of facing Parkinson's has not slowed the pace of innovation in the courses of Carroll School of Management accounting professor Pete Wilson, who has been honored in many ways as a master teacher. He thinks about his teaching—and just about everything else in life—as 'the journey from me to we.' (Gary Wayne Gilbert)

On a Monday afternoon, Professor Pete Wilson motions toward a large screen in Fulton 130 displaying an accounting problem that needs to be solved. The class is Introduction to Financial Accounting, taken mostly by first-year students, and Wilson is presenting them with a knotty question about how the air carrier JetBlue accounts for its long-term leases. Wearing a brown suit and floral tie, Wilson looks out on the curved lecture room with rising seats and says abruptly—“Go!”

The decibel level rises as 45 students break into small groups, racing to solve the problem. They had prepared for class by examining a Wilson-created case study of a fictitious firm (“Busy Beaver Woodwork Company”) and its accounting entries for leases. That taught them the applicable concepts—and in many courses, that might have been enough. But during class, Wilson pushes his students to apply those concepts to a more complex real-life situation. It’s his way of upping their game.

After just a minute of debate among the student team members, Wilson calls the class back to order. No one has an answer. So Wilson lectures a little more and then invites the groups to convene again. This time, when the brief discussions conclude, a young man in the front, sporting a black T-shirt and green cargo pants, serves up solid numbers and the reasoning behind them. Wilson smiles and gives high-fives to members of that group.

G. Peter Wilson—holder of the Joseph L. Sweeney Chair in Accounting at the Carroll School—came to Boston College in 1997, having taught at the business schools of Stanford, MIT, and Harvard. Over the years, he has been honored in many ways as a master teacher. In August, he accepted the inaugural Innovation in Financial Accounting Education Award at the American Accounting Association’s annual meeting. At that same gathering, he also received the J. Michael and Mary Anne Cook Prize for "superior" teaching at the graduate accounting level. 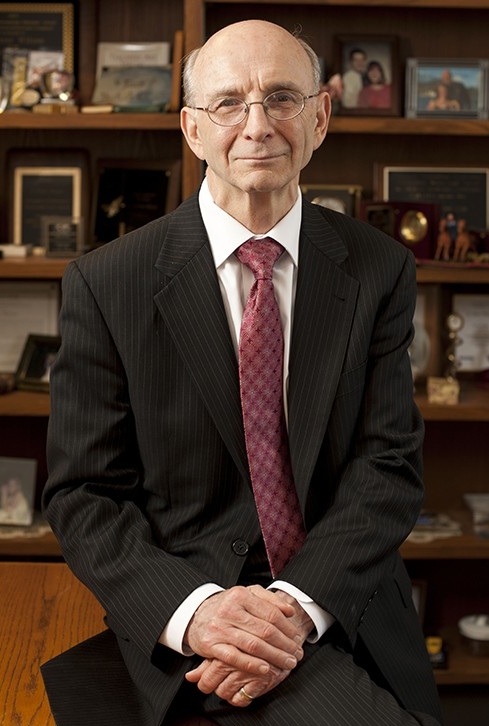 Wilson: 'I’m a very good teacher, but I have great classes. It’s all about us, not about me.' (Tony Rinaldo)

Wilson does not hide the honors: gracing several bookshelves in his fifth-floor Fulton Hall office are crystal, silver, mahogany, and other varieties of award clocks. And yet, the professor isn’t the most lenient grader when it comes to his own performance in class. Wilson’s way of thinking about his teaching—and just about everything else in life—has to do with what he calls “the journey from me to we.”

When asked about the undisputed view that he’s a great teacher, he disputes the point: “It’s just not true,” he says. By way of analogy, Wilson says that he considers himself a “very good” husband and father but that he has a “great” family. “I’m a very good teacher, but I have great classes,” he says, noting that students are held largely responsible for the success of his classes. “It’s all about us, not about me.”

Wilson adds, “You have to say it for years before you believe it. And then you wake up one morning and say, ‘I can’t do this without them.’” He believes it’s a lesson for not only professors but also students who, in his classes, do much of their work in teams.

For more than a decade, his professional “we” has included his wife, Carolyn R. Wilson. In 2002, Carolyn—who had held senior positions in accounting at Hewlett-Packard and Agilent Technologies—teamed up with her husband to launch the multimedia website Navigating Accounting. It is “a free portal for accounting educational content for global educators and learners, including corporate and self-learners,” according to its “About” page. The website includes video lessons consisting of PowerPoint-style slides and voice-over by Wilson. It is used by his students at Boston College as well as others around the world.

Seven years ago, Carolyn officially became an unpaid lecturer at the Carroll School, focusing mainly on the use of technology, such as interactive clickers, in Pete’s classes. Her role has expanded as Pete’s famously animated stride across the classroom has become a little slower, his chirpy voice a little softer. Wilson lets his students know on the first day of class that he is struggling with Parkinson’s, not to gain sympathy but to make them feel comfortable. “They know that if I mumble, they could ask me to repeat something,” he says. He wears a lapel mic in class and no longer needs to write on the whiteboard because Carolyn is operating the screen.

These challenges haven’t slowed the pace of innovation in a Wilson class. Though the Wilsons embrace new tools for presenting information, Pete’s largest innovation over the past decade or so has been pedagogical rather than technological. It has been his use of the so-called “flipping the classroom” model of teaching, in which students get their first exposure to new material outside of class, usually through readings and lecture videos. Then they use class time to do the harder work of digging more deeply into problems that go beyond assigned material.

During a lecture on teaching to fellow Carroll School faculty in March of last year, Wilson explained: “With the flipped class, students learn lower-level thinking skills on their own prior to class, which frees up class time to cover higher-level critical thinking.” The need for students to prepare well for class discussions is part of what Wilson means when he says his classes’ success depends in no small part on the students.

“You have to know when you’re wrong.  That’s part of the journey from me to we.” 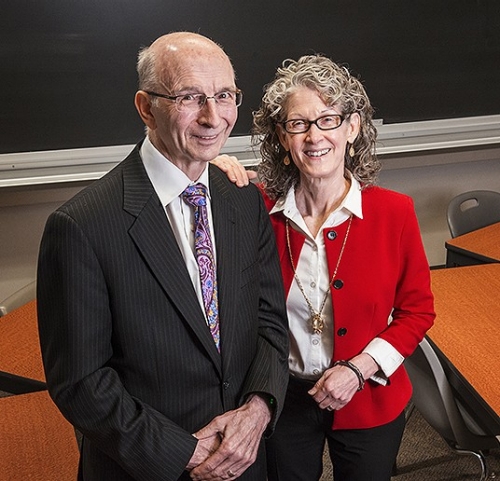 Carolyn says that in recent years the Wilsons have become “more intentional” about their way of flipping the classroom. They’re more explicit with students about what the method involves and why it’s worth the extra effort. The explaining begins weeks before a course begins, with an uncommonly long and detailed syllabus—a “course map,” as Wilson calls it—that arrives in the inboxes of newly registered students. The 71-page course map for Financial Accounting includes this advisory: “We teach tough, demanding classes because the course goals are tough and demanding. But we are committed to creating supportive learning environments that make it possible to set high standards.”

As a result of this full disclosure, many registered students change their minds. Carolyn says that 30 students once dropped Financial Accounting before the first meeting, switching to another, more traditional section of that introductory course required of all Carroll School students. But the add/drop flurry had no net effect on class size because students who were initially closed out of the Wilsons’ two sections came in off a waiting list. In that sense, “students self-select into the class,” Carolyn points out.

“Whatever you put into the class, you get out of it, and then some,” Will LaHera ’18 of East Greenish, New York, said after class one day. “At first it’s a hurdle. And you might be afraid to give a wrong answer but then you realize it’s a safe place. You hear Professor Wilson talk about celebrating the wrong answers”—ones that are well reasoned if not accurate at the final step. Alluding to the intensive preparation outside of class, Paola Pesant ’19 of Miami interjected, “We make a lot of the mistakes before we get to class.”

Wilson frequently recalibrates the difficulty of the problems presented to the students in each class. “There’s a fine line between challenging them and killing them,” he acknowledges, saying there have been instances when he and Carolyn have apologized for asking too much. “You have to know when you’re wrong. That’s part of the journey from me to we.”

Despite the level of difficulty, Wilson gets glowing evaluations from his students. They seem to have bought into his argument that in a knowledge economy they need to continually raise their game. For one thing, Wilson points out that accounting firms and other companies are “increasingly outsourcing their tasks requiring lower-level thinking to countries where these tasks could be done for a fraction of the costs,” as he remarked during a talk to faculty. “The only way for our students to compete is to move up the thinking hierarchy.”

That lecture was delivered at the Wilson Faculty Teaching Seminar, a workshop series for Carroll School faculty renamed for him a year earlier.

“With Pete, it’s never been—‘I’m the one who knows it all.’  He’s always attuned to something he could learn from any other teacher.”

“Pete’s an outstanding teacher, but he’s also a mentor of teachers,” says Carroll School Professor Judith Gordon, who chairs the Management and Organization Department as well as the School’s teaching committee. She was referring to Wilson’s less visible role in helping faculty members to improve as teachers. “He’s very egalitarian about it. He views the discussions with faculty as a two-way conversation,” Gordon stresses. “With Pete, it’s never been—‘I’m the one who knows it all.’ He’s always attuned to something he could learn from any other teacher.”

The last day of a Pete Wilson class is typically listed in the syllabus as “Reflections,” underscoring what he sees as the importance of regularly reflecting on one’s experiences, priorities, and personal and intellectual growth.

One by one, representatives of each team reported on what they judged to be the top lessons learned in the class, among them, “cooperating and collaborating with others in order to truly grow,” and “realizing that accounting isn’t just black and white, there are lots of shades of gray.” During his own reflections, Wilson offered bits of advice such as “rediscover your intellectual curiosity,” “don’t judge yourself too quickly,” and “stretch yourself and be willing to fail.” He also said when he hears from alumni 20 years after graduation, what they remember most about a Boston College education is the accent on values and integrity.

“BC students excel because of values,” Wilson told the class, adding with a smile—“Accounting helps too.”

Pete Wilson says he loves hearing from former students and invites all to get in touch with him at wilsongp@bc.edu.