Canisius Professor of Theology James F. Keenan, S.J., an internationally renowned moral theologian, is this year's recipient of the John Courtney Murray Award, presented by the Catholic Theological Society of America in recognition of a lifetime of distinguished theological achievement. The award—named for an influential American Jesuit theologian and Boston College alumnus—is the highest honor bestowed by the CTSA, the principal association of Catholic theologians in North America and the largest professional society of theologians in the world. 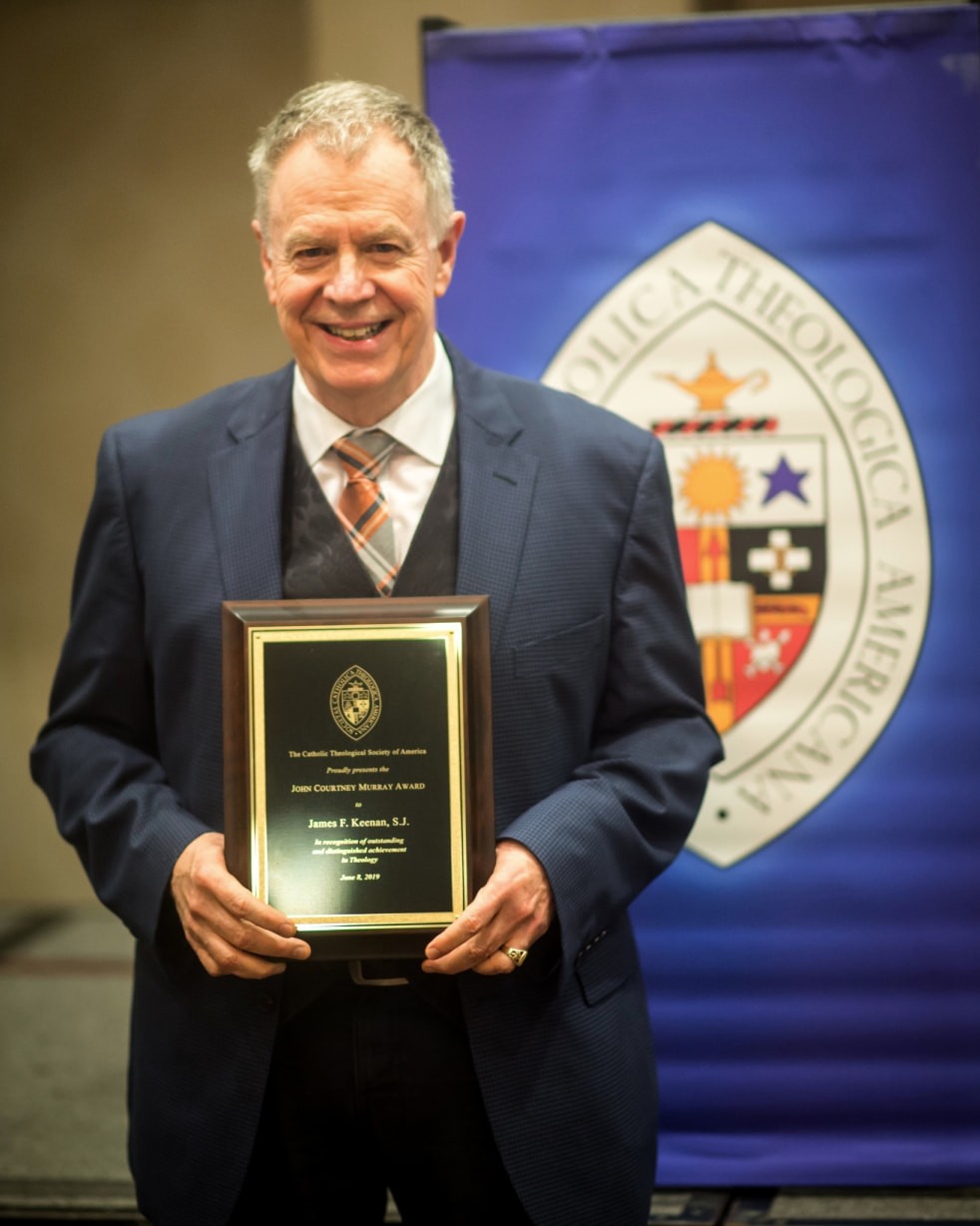 “I never imagined this, and I am very grateful,” said Fr. Keenan when he received the award at the CTSA convention in Pittsburgh earlier this month.

Fr. Keenan, director of the University’s Jesuit Institute and co-director of the Gabelli Presidential Scholars Program, is a highly regarded teacher and mentor of students ranging from undergraduates to doctoral candidates. He received the 2018 Phi Beta Kappa Teaching Award, presented annually by BC students in the national honor society.

In 2002, Fr. Keenan founded Catholic Theological Ethics in the World Church, a global network of theological ethicists and practitioners that has transformed the field by bringing together thousands of Catholic theological ethicists from more than 70 countries to learn from one another and speak out on pressing issues, such as climate change and migrants and refugees. Fr. Keenan served as chair of the organization from its founding until he stepped down last year. Under his leadership, the CTEWC convened several conferences around the world, published a book series, and launched a scholarship program to support the next generation of ethicists.

In its award citation, the CTSA called Fr. Keenan “a giant in advancing a global agenda for theological inquiry” and singled out his founding and shepherding of CTEWC as a crowning achievement in his stellar career.

The CTEWC has explored new avenues of pluralistic dialogue in the interactions of theology and ethics by moving beyond a U.S./Western European perspective and embracing the ideas, experiences, and cultures of other regions, particularly the Global South. The CTSA described Fr. Keenan’s achievement as a combination of “depth of scholarship, a commitment to open inquiry, and a flair for theological entrepreneurship that is unmatched in our times.”

In addition to his efforts with CTEWC, Fr. Keenan is an accomplished scholar who is the author/co-author or editor/co-editor of numerous books, including Moral Wisdom: Lessons and Texts from the Catholic Tradition; Paul and Virtue Ethics: Building Bridges Between New Testament Studies and Moral Theology; Catholic Ethicists on HIV/AIDS Prevention, which won an Alpha Sigma Nu Book Award, and The Bible and Catholic Theological Ethics, which received recognition from the Catholic Press Association. For 10 years, he was the editor of Georgetown University Press’ Moral Traditions series, which produced some 50 titles.

In his acceptance speech at CTSA, Fr. Keenan discussed the important role connections play and how they can help people find their voice. “I have always wanted to help others find their [voice]. And I think that’s really most of what I do: whether mentoring or networking, I try to empower others to find their voice as I continue to find my own.”

Below: James F. Keenan, S.J., is joined on stage with some of his former students at the Catholic Theological Society of America meeting. (Photo by BC alumnus Paul J. Schutz, Santa Clara University) 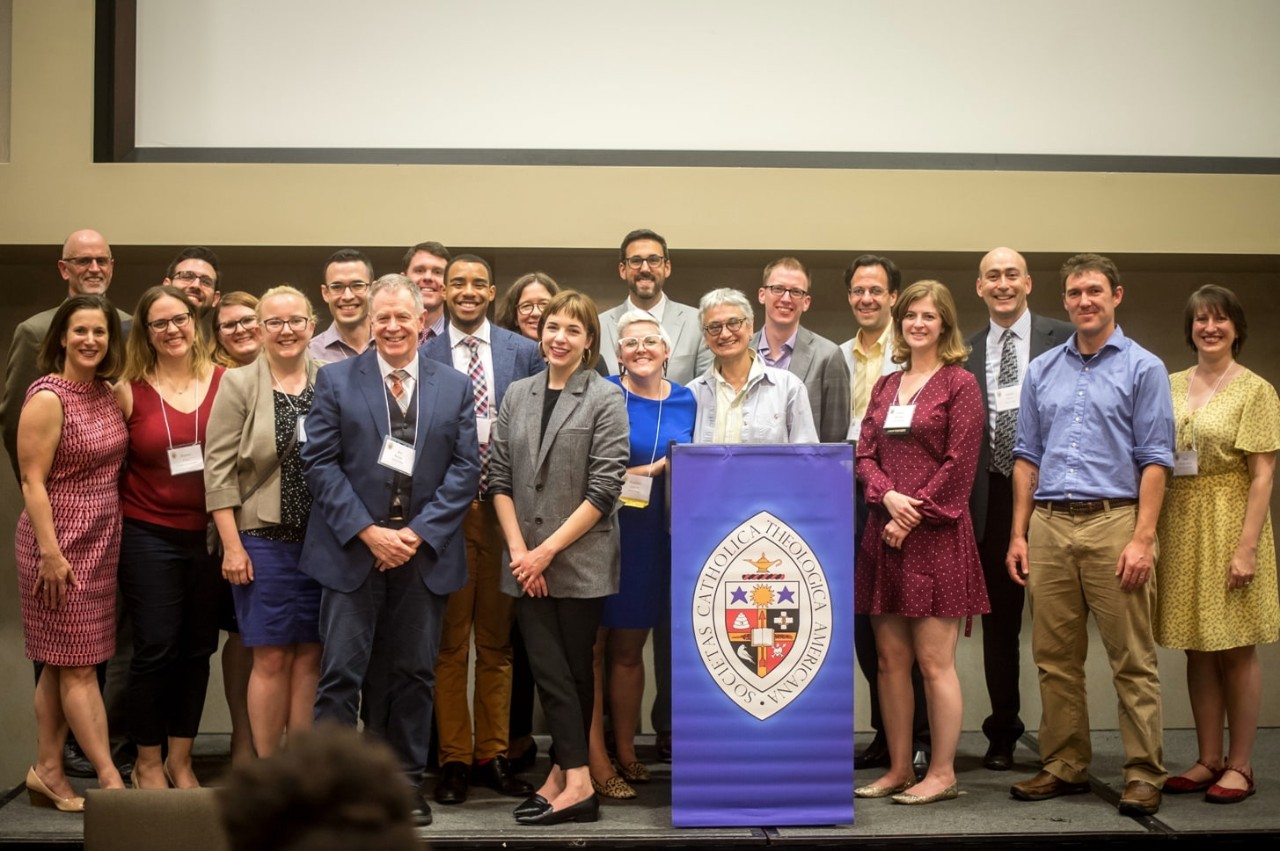