"For God and Country"

John P. Foley, S.J., had already taken one momentous journey very early in his life: At just six weeks old, he had traveled with his Irish-born parents from Scotland to the United States, settling in the city of Somerville, Mass.

In the spring of 1942, Fr. Foley—by then the 37-year-old dean of admissions and assistant dean of freshmen and sophomores at Boston College—set out on another fateful journey, one that would last three years and take him through the conflagration and chaos of World War II as a U.S. Navy chaplain. Along the way, Fr. Foley diligently recorded his observations and experiences in a notebook, documenting horrors and heroism alike while chronicling the life and times of the many young men he served, comforted, and buried—many of them half his age. 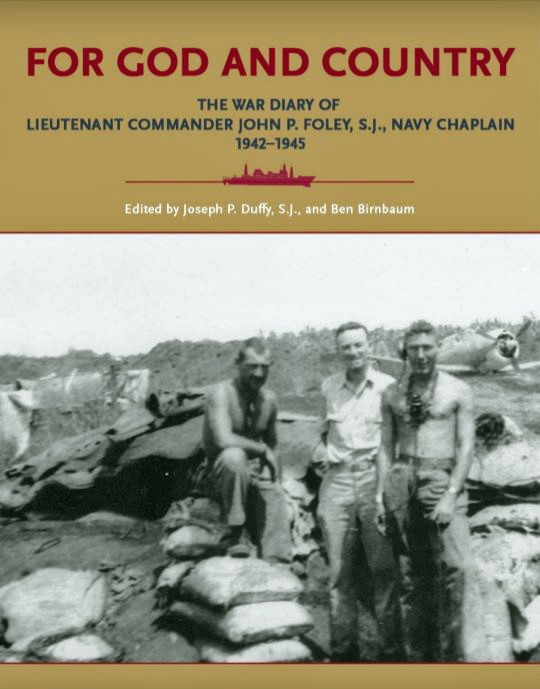 The entries typically include Fr. Foley’s notes on his schedule for the day (“0600-Mass”; “1000-Protestant Church Service”; “1500-Rosary and Benediction”) as well as accounts of the day’s events, some of them mundane, even given the circumstances (“I stay aboard this afternoon cleaning up a lot of odds and ends that were clamoring for attention”)—but many others marked by fierce combat with enemy ships and aircraft, or by severe weather.

Fr. Foley also relates encounters and conversations—from the casual to the in-depth—with various officers and enlisted men and gives often vivid descriptions of the places he and his comrades visited, such as the beautiful yet battle-ravaged Solomon Islands and the ruins of Tokyo, and the people they found there. Other entries are of a more personal nature, in which he reflects on larger questions of faith and muses on the joys and sorrows of his job: helping an enlisted man sort out his complicated emotions about being in combat; giving last rites to soldiers for whom he had said Mass earlier that same day; writing letters to families informing them of a loved one’s death.

“A rooster far away crows his tune with no echoing reply,” he writes during a stopover in New Zealand. “The summer wind is sighing in the pines. The whole scene breathes of peace and happiness. I can’t help thinking of the boys up north, pouring out the red sweet wine of their youth on Bougainville and those others who died in Tarawa recently.”

“Through Fr. Foley, you get a sense of the sacrifice these young men made, what they felt and experienced...You also see the important role of religion, of faith, in the lives of the soldiers, what it meant to these young people who were facing death. And there with them is a Boston College Jesuit providing spiritual care at this critical time in their lives.”

Part of what makes Fr. Foley’s journal such a unique window onto World War II is its very existence: American officers and enlisted men were forbidden to keep diaries, for fear these might fall into enemy hands and provide useful intelligence. But Fr. Foley carried his notebook throughout his training at Chaplain’s School in Virginia and subsequent service in the North Africa and Pacific theaters of war, and brought it back with him when he returned to his post at BC. His secretaries transcribed and typed the entries, and the diary was preserved in the Society of Jesus New England Provincial Archive at the College of the Holy Cross, where Fr. Duffy—a devotee of 20th-century Jesuit history—came upon it.

“What struck me about the diary is that it realistically captures the on-the-ground reality of war,” said Fr. Duffy. “Through Fr. Foley, you get a sense of the sacrifice these young men made, what they felt and experienced. That is something worth remembering, especially during this month of Veterans Day, and as we approach the 80th anniversary of Pearl Harbor.

“You also see the important role of religion, of faith, in the lives of the soldiers, what it meant to these young people who were facing death. And there with them is a Boston College Jesuit providing spiritual care at this critical time of their lives. Fr. Foley’s great respect for all of them, whatever their religion, is very apparent.”

Birnbaum, who worked with Fr. Duffy on his three previous digital publications of Jesuit history—housed in the Joseph P. Duffy Collection of Digital Works at the Jesuit Archives and Research Center—said the insights into Fr. Foley through his journal make for another compelling thread.

“He was trying to figure out what kind of a man he was, and how he could endure the terrible things that come with war. What becomes clear is that the soldiers didn’t look at him as somebody privileged by the fact of his being a Jesuit chaplain; they judged him as a peer, as one of them. That was terribly important to Fr. Foley. He comes across as an astonishingly thoughtful, resilient, and generous person, someone who recognized the common humanity of others, including the Japanese.”

“For God and Country,” which includes photographs and explanatory footnotes, can be viewed as a flipbook below.

For God and Country