Dedicated Intellectuals of the People

Provides a space for AHANA males to discuss issues that affect their social, emotional, spiritual and intellectual growth and develop skills to navigate through a predominately White institution. 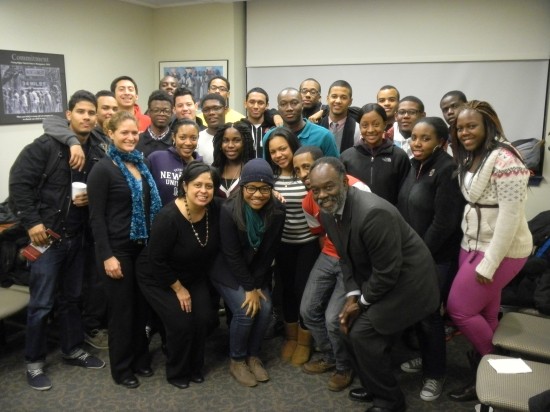 In the spring of 2000, Dr. Donald Brown, Dan Bunch and Martin Pierre helped to foster a character-building group for Black men on the campus of Boston College. Currently, DIOP consists of a synergetic group of AHANA men who gather every Wednesday at the Learning to Learn House to share in a common bond. These men discuss issues that affect their social, emotional, spiritual, and intellectual growth.

The group drew its name from the writings of the eminent Black scholar, scientist, Egyptologist, linguist, anthropologist, political activist, critic, and historian Cheikh Anta Diop. A director of the Radiocarbon Laboratory at the Fundamental Institute of Black Africa and Secretary-General of the Rassemblement Democratic Africa, Diop emerged as one of the scholars who exerted the greatest influence on Negro thought in the 20th century. The men at Boston College coined the term DIOP as an acronym for Dedicated Intellectuals of the People.

The organization improves students' opportunities by stabilizing their learning environment, helping them to become self-supporting, and eventually empowering them to control their own destinies. It is the organization's belief that the recognition, encouragement, and leadership skills given to African-American men today serve as a powerful inspiration that can shape tomorrow's world.

In addition, the group fosters character development and life-lasting friendships. As one member explains, "These men seemed to possess a magnetism that drew most of my attention. A power and chemistry were at work that the Brothers were willing to openly acknowledge during the meeting. At the meeting, the men passionately expressed their love, commitment, nurturance, and accountability for each other. I soon realized that, as men, we seldom speak of our relationships in such terms for fear of being misunderstood or misperceived. We often become victims to our fears — fears that are deeply rooted by the historical socialization process, that have placed vise grips on our emotional expression. As a result, some relationships are not fully developed."

Because the Brothers are connected on a spiritual plane, they avoided waddling in the superficiality of typical relationships and quickly experienced dialogue about more germane issues. It is not uncommon for the discussion to focus on various topics, for example:

As the Brothers grapple with these and other complex issues they are often confronted with their worst fears and vulnerabilities. The discussion can sometime erupt in heated debates and often personal offenses. However, like most family of origin, the struggle to find common ground is not in vein. One thing is certain: these Brothers, as a collective force, are able to wrestle with some of the most complex issues facing Black males in the 20th century.

The professional development training includes African american leaders from the local and regional community. This includes ministers, members of the academic community, and entrepreneurs.