Student poets from some 20 Boston area colleges and universities, including Sherry Hsiao '17, will recite their work at BC.

Young poets representing some 20 Boston area colleges and universities will gather at BC to present their work at the annual Greater Boston Intercollegiate Undergraduate Poetry Festival on April 25. The free, public event will be held at 7:30 p.m. in the Murray Function Room of the Yawkey Athletic Center.

All participants read original work at the event, and a chapbook of poetry by the participants is published in conjunction with the festival. 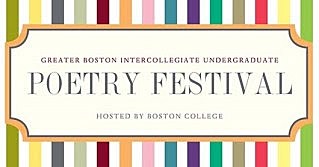 The evening will begin with a keynote address by extensively published local writer Andrea Cohen, director of the Writers House at Merrimack College and the Blacksmith House Poetry Series in Cambridge. The recipient of a PEN Discovery award and Glimmer Train’s Short Fiction Award, Cohen is the author of Unfathoming, Furs Not Mine, Kentucky Derby, Long Division and The Cartographer’s Vision. Her poems and stories have appeared in the New Yorker, Poetry, Threepenny Review, The Atlantic, and New Republic, among other publications.

Cohen is “a master of concision, a poet of intense brevity and utility,” according to Associate Professor of the Practice of English Susan Roberts, who took the festival's organizational reins from Professor of English Suzanne Matson during Matson’s sabbatical.

“Her poems are largely made up of short lines (with genius line breaks), a focus on interior music and repeating sounds that make her images both unique and potent. She’s also funny in a wry, effective way, able to define the human predicament in a fresh voice.” 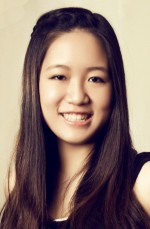 Sherry (Yu-Hsuan) Hsiao, a BC senior from Taiwan who began writing poetry as a fourth grader, was selected to present her poem “Twenty Minutes to Jing An.” She describes the poem as portraying her relationship with China but hopes it also resonates with audience members.

“Its inclusion in the festival encourages me to continue writing from different perspectives, and I hope ‘Twenty Minutes to Jing An’ allows readers who are unfamiliar with China to gain a better understanding of the country’s culture.”

Her inspiration for the work “came from hearing the words, ‘Next stop: People’s Square,’ while I was on a metro ride in Shanghai last summer,” she explained. “I knew immediately that I needed to write something about China, about Mao Space — Mao’s former residence in Shanghai — being surrounded by skyscrapers in downtown Shanghai, about the complexities of China’s national identity.

“As a Taiwanese person who grew up in China but received an American education, I feel like an outsider no matter which culture I’m writing about. But I hope that through my writing, I can confront my own ambivalence toward each culture, and help others become conscious of those same intricacies.”

The final stanza of her poem reads:

Next stop: the train churns on,

towards a Communism in which only Americans still believe.

The train churns on,

Space in the heart of the city. And hidden behind balconies

The student cheers for this moment in time

When he can finally watch history repeat.

After graduation, Hsiao — a psychology major with minors in English and psychoanalytic studies — plans to return to Taiwan to pursue a project that encourages writing: She hopes to start a book club and writing workshop.

“I am incredibly grateful for the opportunities BC has given me to develop my writing, whether it’s through my writing workshops, writing for The Heights, or papers for class. I hope to always find the time and energy to continue reading and writing. I like writing poetry because it allows us to capture a single feeling or moment in our everyday lives, sort of like a painting or a photograph.”

This spring marks the 12th consecutive year that Boston College hosts the event, which rotated among a dozen participating schools from the mid-1980s to 2001, and then was suspended until 2006. With campus support, it was revived that year by Matson, with Boston College as the host institution.

Roberts looks forward to welcoming Cohen to campus. “Having dealt with many issues and even controversies within the current American poetry scene, I think she’ll be able to offer the students at the festival a look at what a gifted wordsmith can still do, how poetry can still surprise and be an effective — even necessary — force in our current discourse.”