Poet of the imagination

University Professor of English and 'biographer of poets' Paul Mariani explores the life of Wallace Stevens.

Wallace Stevens (1879–1955) worked most of his professional life as an insurance executive, yet is considered one of the greatest poets of the 20th century, winning a Pulitzer Prize and two National Book Awards. A new biography by University Professor of English Paul Mariani shows how, through his poetry, Stevens sought out the ineffable and spiritual in human existence in his search for the sublime. 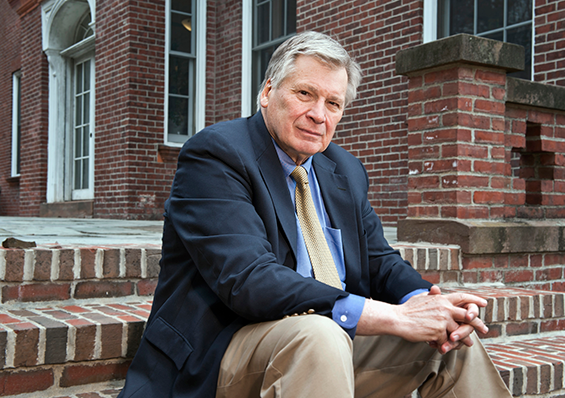 According to Mariani, Stevens’ philosophical questioning, spiritual depth, and brilliantly inventive use of language would be profound influences on poets as diverse as William Carlos Williams, Hart Crane, Elizabeth Bishop and John Ashbery.

Mariani – who’s been called the “biographer of poets” for his previous volumes on Hart Crane, Gerard Manley Hopkins, William Carlos Williams, Robert Lowell and John Berryman – said he started reading Stevens while an undergraduate more than a half century ago and has never stopped.

As a biography subject, said Mariani, Stevens was not an obvious romantic or dramatic figure, like Hart Crane who died at age 32. He was a businessman in an unhappy marriage, who did not publish his first book of poetry, Harmonium, until age 44.

“If you look at his life, from the outside, very little seems to be happening,” said Mariani.

It was Stevens’ interior life that was of interest to Mariani: “Stevens speaks to the human condition. I wanted to see if I could bring him to life.”

The historical events of Stevens’ time – the Gilded Age, the Depression, and World War II – are all embedded in his poetry, Mariani noted.

In researching the biography, Mariani read books on Stevens and explored what other poets said about him, toured his home in Connecticut, studied his personal letters, and spoke with Stevens’ only grandchild.

Stevens started his career in New York City as a journalist — one of his first assignments was covering the funeral of author Stephen Crane. On the advice of his father, he decided to devote himself to a more lucrative career and pursue his interest in writing on the side. Stevens went to law school and became an expert in surety insurance. He ultimately rose to the rank of vice president at what is now The Hartford. He and his wife, Elsie, had a daughter named Holly.

An imposing figure, both physically and personally, Stevens had a witty, comic and Dionysian side to his personality, according to Mariani. He liked to travel to Key West and once got into a fistfight there with Ernest Hemingway.

Stevens’ work can be difficult but is greatly rewarding to read, according to Mariani, who has helped generations of students decipher Stevens’ poetry during his nearly 50-year teaching career.

“He was the most elusive of poets. The imagery is difficult,” he said, adding that some of Stevens’ best-known poems, “The Emperor of Ice-Cream” and “The Snow Man,” “are almost like riddles.”

Mariani taught his last class at Boston College this past semester. He continues to write his own poetry and lecture. His poem, “Psalm for the Lost,” has been selected for the anthology Best American Poetry 2016. He will give a talk on Gerard Manley Hopkins in Jerusalem in May, and is at work on his next book project, a memoir of growing up in New York City.