Widely acknowledged as an esteemed researcher and teacher, he was hailed as a pioneer in bringing an international context to social work.

Retired Boston College School of Social Work faculty member Demetrius Iatridis, who survived a war-scarred youth and became an advocate for cooperation and compassion to aid those in need, died on June 25. He was 93. 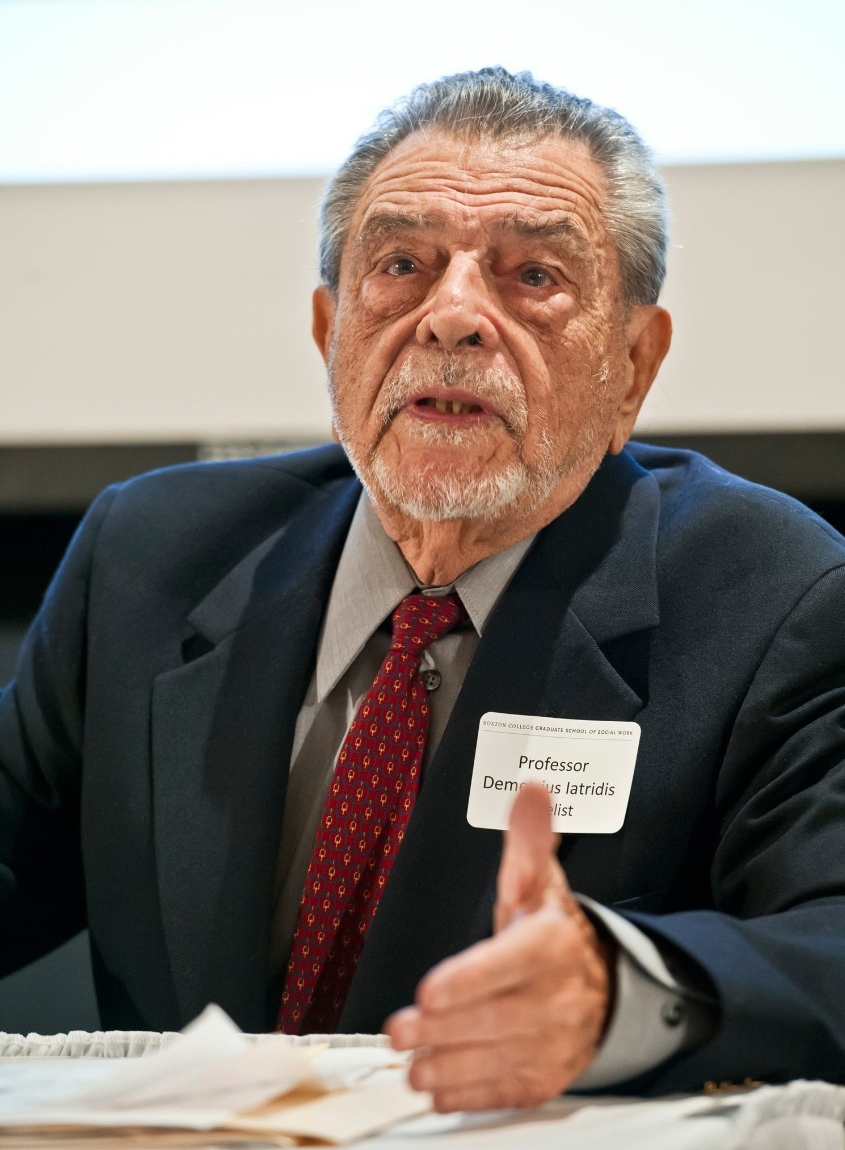 Demetrius Iatridis speaking on a panel during a campus event celebrating his career in November 2012. (BC MTS)

Dr. Iatridis was widely acknowledged as an esteemed researcher and teacher in social policy and social welfare, and hailed as a pioneer in bringing an international context to social work—particularly for his study of former communist nations’ efforts to build social services systems in a market economy.

As chair of the Community Organization, Planning and Policy Administration concentration, he founded BC School of Social Work’s “Boston Day” event at the Boston Redevelopment Authority, which gave students the opportunity to form ties with city authorities and neighborhood leaders—an important resource for prospective social workers, he believed.

“He’s always been concerned with those people who are disadvantaged, who have fallen behind,” said Barry Bluestone, a former BC faculty member, when Dr. Iatridis retired in the fall of 2012.  “In the best Jesuit tradition, Demetrius has kept his focus on helping those whom society tends to neglect, and he’s always reminded his students of the importance of doing that. That’s why so many of us respect him so much.”

Dr. Iatridis’ life path, and his personal and professional ideals, were formed in the crucible of World War II. He was only 16 when the Nazis invaded and occupied his native Greece. On his own, he escaped to the island of Crete, but found it no safer there, and was forced to hide in the mountains until he was able to flee by boat to Egypt. Lying about his age, he joined the Greek air force and served as a tail-gunner. During the war, he lost his mother and grandmother.

For Dr. Iatridis, the war changed everything. Where once he had aspired to go into aeronautical engineering—he had earned a scholarship to Stanford University—now he sought something else.

“I decided that the world would not be built by aircraft engineers but by mutual aid, collaborative programs to prevent other wars,” he explained in an interview with the Boston College Chronicle upon his retirement. “Instead of seeing the powerful always defeating and dominating the powerless, I wanted to help the powerless become powerful. This became my goal.”

After the war, Dr. Iatridis aided United Nations’ efforts to help children in his country affected by the conflict, and the U.N. sent him to the U.S. to observe its social welfare system. He went on to earn degrees from Washington and Jefferson College, the University of Pittsburgh School of Social Work and the Bryn Mawr School of Social Work, then returned to Greece for a while to help assist in establishing a graduate school of planning.

He arrived at BC in 1966 as director of its new Institute of Human Sciences, founded by then-University President Michael Walsh, S.J., who envisioned a hub of teaching and research dedicated to social sciences as a potential strength for BC, much like engineering or architectural studies was for MIT. Dr. Iatridis was given a joint appointment in the School of Social Work. After six years, the institute was viewed as having achieved its goals and was disbanded, said Dr. Iatridis, and he became a full-time faculty member in the school.

While he acknowledged being “skeptical” about BC at first, and uncertain whether his beliefs aligned with those of Jesuits, Dr. Iatridis told the Chronicle he had found BC a “very good fit. I was able do things I might not have had an opportunity to do otherwise.”

He taught classes comparing social policy in capitalist and communist societies, led students on visits to Cuba so they could draw their own conclusions, and invited Cuban social services experts to speak at BC. Some critics thought these practices amounted to an endorsement of communism, but Dr. Iatridis insisted otherwise.

“My point was, ‘What can we learn from the way these countries practice social policy? Nobody, as far as we knew, was looking into this. The students would decide for themselves what was effective and what wasn’t, and they would have to account for and justify their positions. There was nothing ideological about it.”

During one visit to Cuba, Dr. Iatridis met with Fidel Castro, who asked if social work was an appropriate profession for the country.  “I said, ‘It depends. If you want to increase participation of people in decision-making, it’s your best model. It does not work well in dictatorships,’” recounted Dr. Iatridis. “A few years later, he established social work as a profession in Cuba.”

The dramatic end of communist rule in Europe and Russia at the end of the 20th century created a new area of exploration for Dr. Iatridis. He organized several major conferences to examine the challenges faced by former Soviet Bloc nations in building social service systems in a market economy, and co-published an accompanying series of books.

“This was a tremendous opportunity to put social work in the forefront of a major world development,” he said. “The conferences and the books were very well-received. It was very good exposure for the School of Social Work and BC.”

Dr. Iatridis served on several University committees, and chaired the Faculty Compensation Committee for 15 of the 27 years he was a member. In 2000, he was presented with a Distinguished Service Award from the University.

Fittingly, Dr. Iatridis’ career was celebrated in November of 2012 with a panel discussion—in which he was a participant—on the issues of policy, planning, and poverty that had informed his teaching and research. Former Massachusetts Governor Michael Dukakis presented a keynote address at the event.

As he contemplated retirement, Dr. Iatridis vowed to remain active by volunteering for programs and projects combatting poverty—a subject virtually absent from the 2012 election campaign, he said.

“The poverty and inequality I saw after World War II was the reason I went into social work,” he said, “and I am going to continue to help the powerless.”

Dr. Iatridis and his wife Mary, who died in 2015, are survived by their children Anna, Tanya, Stavros, and Maki, and 13 grandchildren.