Dean Susan Gennaro looks on as BC overnight custodian Fred Vautour presents a diploma to Connell School of Nursing graduate Alicia Vautour, the fifth and final one of his children to graduate from the University. (Photos by Lee Pellegrini)

Being an overnight custodian may not be the most glamorous job on campus, but to Fred Vautour, all that mattered was giving his children a better life than he had. On May 23, the proud father saw the last of his five children graduate from Boston College, capping an impressive and thrilling journey for his family—one filled with sacrifice, pride, and a bittersweet tear or two.

“To have all five come through is a dream come true,” said Vautour, who began working at Boston College in 1994. “I never would have believed it. It’s kind of sad because when I started I said I have 18 years of my kids going to college and hopefully they’ll all come here. And now it’s over.”

His wife, Debbie Vautour, said watching her daughter complete the circle of higher education was “a wonderful gift.”

“Now the kids have the means and the tools to soar. It’s truly an amazing dream," she said. "Fred and I never got to go to college so we’re living through them: their highs are our highs, and we’re with them every step of the way. I can’t tell you how big my heart is right now. To see the last one cross the stage is just amazing. I can’t tell you how happy I am.”

When it was Alicia’s turn to walk across the stage at the Connell School of Nursing graduation ceremony, waiting to hand the diploma to her was her father, just as he had done with each of her siblings before her.

“I kind of cried for myself a little bit because it’s over,” her father said. “For the past 18 years, I’ve always had a kid in college while I was working here so it’s a little different now.”

“It was always in the back of my mind just how thankful I was,” said new graduate Alicia Vautour, who will sit for her nursing boards this summer. “I fully appreciated it and from there just tried to push myself even harder to do well in school.”

“It’s unreal, it’s just an unreal experience,” says Tom Vautour, a 2011 Carroll School of Management graduate who now works as an IT consultant. “We’re so grateful for what our father has done and been through to support his children. He lives for us.”

Because Vautour worked at Boston College, his children were able to attend the University—after first being accepted—without having to pay tuition. And so he continued to work the overnight shift at Robsham Theater, cleaning up when most people are sleeping, throughout their collective years at BC. 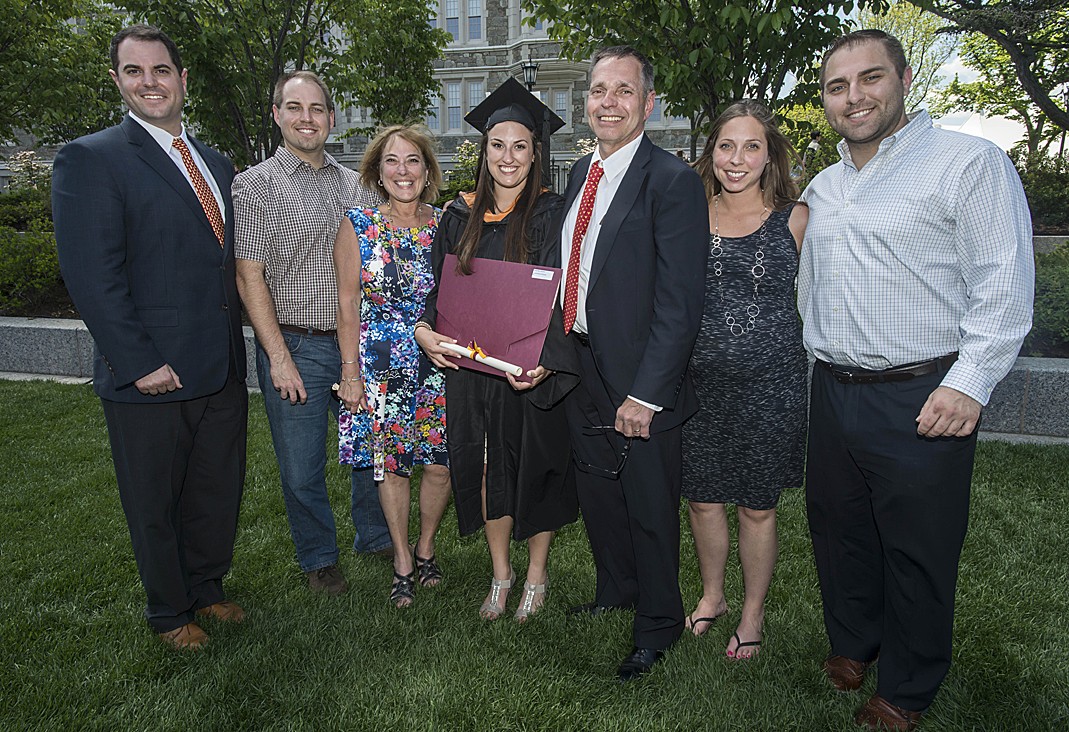 Members of the Vautour family gathered at the Heights for Alicia's Commencement, the final of five for this family of Eagles. L-R: Michael '09, John '04, their mother Debbie, Alicia '16, father Fred, Amy '02, Tom '11.

It all began in 1998, when daughter Amy was accepted to the school she’d always wanted to attend.

“I think Boston College was always something that we dreamed of but didn’t think we could actually go because we couldn’t afford it,” says Amy Vautour Carney, who graduated from the Lynch School of Education and now works a fundraiser. “Being a first generation college student, this whole experience was new for all of us, especially me. To be able to be the first one and have so many follow after is pretty amazing.”

Next up was John, a 2004 graduate of the Carroll School of Management, who fully appreciates what his father made possible.

“You really can’t put it into words,” says John Vautour, now a software quality manager. “We can’t even think of ways to begin to repay him for his service to us and his loyalty and love to us. It really is just amazing to have this opportunity to be able to come to such a great school, for practically nothing.”

While enrolled at BC, all the Vautours made it a point to find their dad on campus to say hello.

“It was great knowing my dad was here,” says Michael Vautour, a 2009 graduate of the Carroll School of Management. “I would stop by and visit with him. Every now and then, I would stop by on a Thursday night and hang out with him while he was working.”

That the Vautour children would be able to attend BC tuition-free never even dawned on Fred when he was first hired as a cook in 1994. Back then, he was just interested in having a job with benefits for the first time in his life.

“It’s a gift from God because, for one thing, I never would have been able to afford to put my kids through this type of University, not five kids. It’s hard to put in words what it’s been like to have five Boston College Eagles. The fact that it’s just such a great university—and the networking they have is unbelievable. I just have to thank BC for being so gracious to me and allowing my five kids to come in here.”

“It’s just an amazing opportunity for us and we’re just blessed to have had it,” says Michael Vautour. “The fact that my dad working here allowed us the opportunity to become part of this great Boston College community—it changed all our lives for the better.”

“It’s definitely something we won’t take for granted,” adds Tom Vautour. “I owe him the world. His mentality was working for others, and working for his kids so that they could have a better life. That’s really all his dream was.”

Amy says he pinched herself at her good fortune while attending BC. "I think my parents are the prime example of men and women for others, Jesuit idealism," she said. What he’s done for all of us is what BC is all about.”

Come September, Boston College’s campus will be empty of Vautour students. But Fred will be here.

“Even when I didn’t see them on campus, I knew they were here. Next year is going to be a little different and a little disheartening because I’ll be saying, ‘Oh, nobody’s here.’ But I’ll get over it. It’s a new generation; the grandkids are coming.”