The only constant will be change, U.S. Secretary of Energy Ernest J. Moniz tells the graduating class

U.S. Secretary of Energy Ernest J. Moniz ’66 told the Class of 2016 at the University's May 23 Commencement Exercises to be prepared for momentous changes, on both a personal and a global scale, in the coming years—much like what he himself experienced in the half-century following his own graduation from Boston College.

But rather than fear the future, Moniz said the graduates, empowered by the intellectual and spiritual formation they experienced at Boston College, should embrace and make the best of change in ways that will have the best possible effect on society, especially the poorest and most vulnerable.

“Whether you make that difference at the individual, community, national or world level, you will decide,” he said. “You’ll have opportunities placed in front of you. Communities of faith have historically played a critical role in these areas. Boston College has given you tools. Use them or lose them—and use them to good end, because you will write history.”

Commencement scenes from @BC
Video message for the Class of 2016: The Beacon

Some 4,000 BC students received their undergraduate and graduate degrees following the main Commencement event at Alumni Stadium, fanning out to separate ceremonies held around campus. Associate Professor of History Charles Gallagher, S.J., offered the invocation, and Most Reverend Peter J. Uglietto, vicar general and moderator of the curia for the Archdiocese of Boston, delivered the benediction.

University President William P. Leahy, S.J., in his welcoming remarks, asked the family and friends of those receiving degrees to stand and be recognized as “special people whose support, encouragement, and guidance made such a difference to our graduates.” 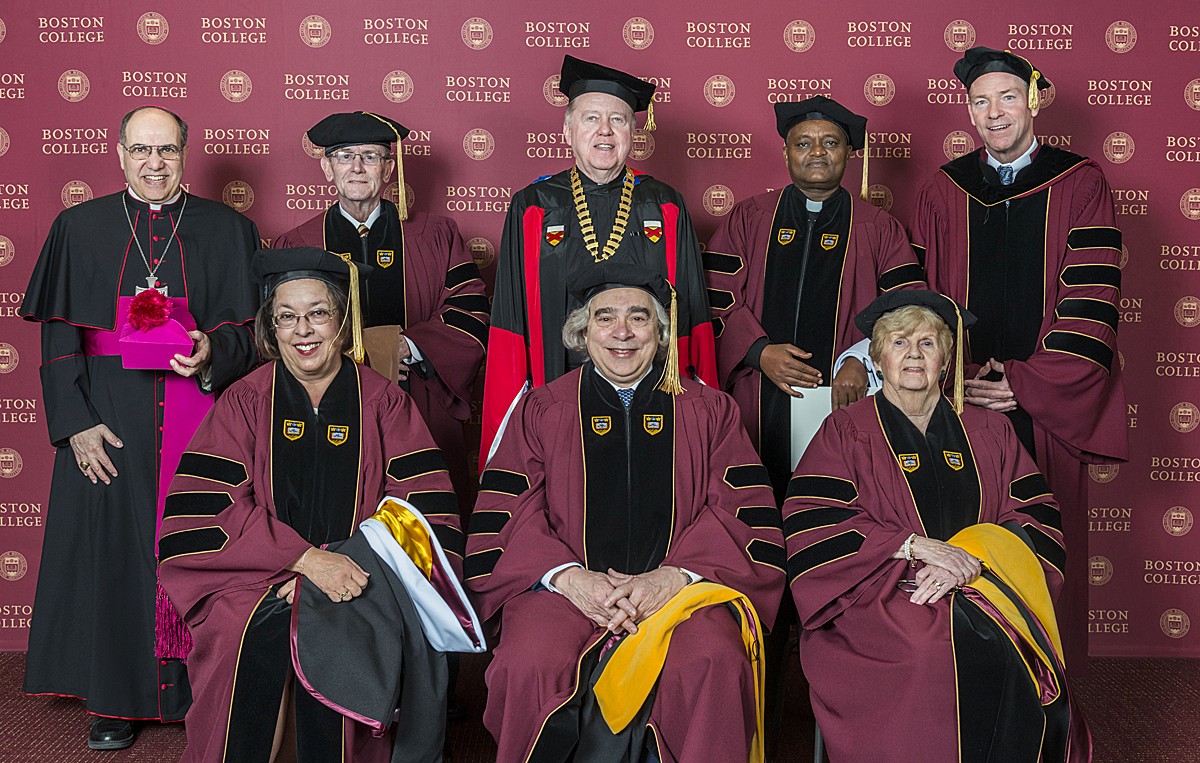 Fr. Leahy touched on some of the milestones that were part of the Class of 2016’s time at BC: the construction and opening of Stokes Hall—“a building which reaffirms BC’s commitment to the humanities”—the record snowfall of the winter of 2015, and the terrorist bombings at the 2013 Boston Marathon.

The Boston College community is “part of a world that is certainly more complicated and as, or perhaps more, challenging, than any that Boston College graduates have entered since our founding a century and a half ago,” he said: Technological advances bring progress but “also enable abuses”; wealth is “increasingly concentrated in the hands of fewer and fewer”; millions of lives have been disrupted by war and violence, and religious faith is “under challenge in many parts of the world.”

Fr. Leahy also pointed to continuing racial tensions and the impact of partisanship on government’s ability to address environmental, educational, social and other urgent issues.

“Our nation and world face daunting problems, but we must maintain perspective, hope, and confidence,” he said. “There have been challenges throughout human history, and I believe that you, the Boston College graduates of 2016, will do your part to engage and resolve troubling issues of our day because of who you are and what you have experienced at Boston College.”

Fr. Leahy urged the Class of 2016 to “use your education and talents in the service of society, that you give to others from the abundance of gifts that you have received, and that you put into practice the principles, values, and beliefs of Jesuit education shaping and guiding Boston College.”

Moniz also touched on the challenges ahead for this year’s graduating class, especially climate change and its myriad economic and social as well as environmental effects, but also the greatly altered world security framework. Boston has recently born witness to both, he noted, through the extreme weather in the winter of 2015 and the tragedy and horror of the 2013 Marathon bombings.

“Those are just indications of much, much greater trends that you’ll be dealing with in a multi-generational sense,” said Moniz. However, he added, the graduates will confront such tests “with an education that will allow you to be good stewards of the Earth, and its ecological and human needs.”

Moniz pointed out that some changes ahead could bring benefits, or appeal to our thirst for adventure and exploration: City services might be completely managed through robotics, for example, and commercial space flight might be possible (“We may even be able to leave Earth’s orbit for a little while.”) Perspective, he said, is therefore a very important quality with which to approach the future.

“The things you have grown up with, my generation has had to learn about late in life,” he said. In his field of physics, the store of knowledge about the particles that make up the universe—which he had studied in his courses at BC—changed dramatically in just 10 years after he had earned his degree.

“The key was being prepared, not only to accept this change but to advance it,” said Moniz. “The only constant will be change, and therefore what’s needed is the preparation to adapt and shape that change the way this country has, with great success, over a long period of time.

“Your BC education, and the values this institution has promulgated, will prepare you well, I believe, for that change.”

Part of the graduates’ challenge will be to use their gifts and abilities for the good of others, emphasized Moniz, much as his fellow honorary degree recipients have done throughout their lives. It is the Jesuit tradition that “brings the threads together” of advancing education and social justice, and he urged the Class of 2016 to hear “the voices of the poor” around them.

“We need a lot of innovation from your generation. We need it in our science and technology, policy and politics, business models. Every skill set you have must be brought to bear to address these issues, while adhering to the core values we have spent two millennia developing.”