A Veterans Memorial Committee was formed in 2005 to develop a permanent tribute. Co-chaired by Vietnam War veterans Paul G. Delaney CSOM'66 and Paul L. Lufkin CSOM'64, the group coordinated research that expanded the remembrance list of those alumni who died in battle to 209 names. Beginning with an appeal in 2007, it raised over $500,000 for construction, installation and permanent upkeep of the memorial from hundreds of alumni veterans and others.

The Boston College Veterans Alumni Network (BCVAN) was established in 2011 as an alumni affinity group to strengthen the bonds between BC alumni, student veterans and the University. Paul G. Delaney CSOM’66, was the founding chairperson of the BCVAN. He was succeeded in 2012 by co-chairs George J. Harrington CSOM’80 and Daniel M. Arkins Jr. MCAS’81. In 2020, Michael Dunford CSOM'82 and Bill Kelley CGSOM'18 assumed responsibility as co-chairs A BCVAN Executive Committee provides counsel regarding activities sponsored by BCVAN and continues to participate in the annual Mass and Remembrance Ceremony. 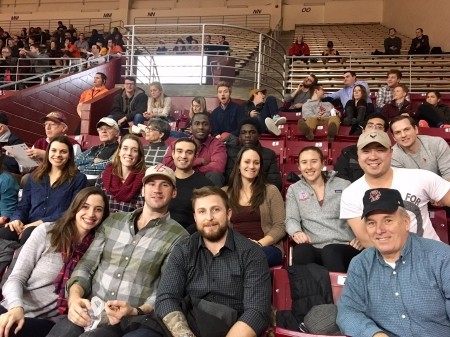 BC alumni and student veterans attended the BC Men's Basketball game on Military Appreciation Night, Jan. 2017

For inquiries regarding the Veterans Alumni Network, please contact bcvets@bc.edu