BC evolutionary anthropologist Dorsa Amir on recapturing childhood in the modern era.

Classrooms, sports practices, play dates: Some aspects of childhood seem so routine you’d never think to question them. But maybe you should. Postdoctoral research fellow Dorsa Amir had just such an opportunity while studying childhood among the Shuar, a foraging-horticulturalist group in Ecuador’s Amazon rainforest. 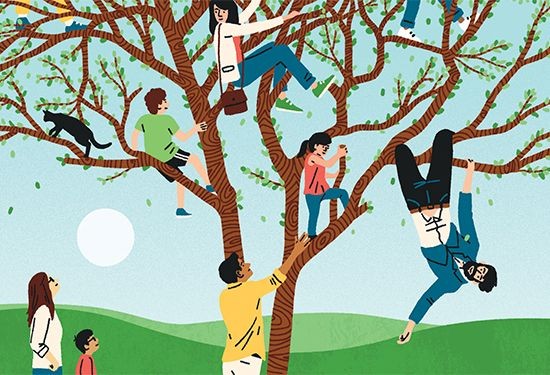 For a month during 2014, Amir watched Shuar kids deciding how to pass the time. And—surprise!—they didn’t choose to spend it under adult gazes. Instead, they ran free in mixed-age and mixed-gender groups, wielding weapons, climbing trees, lighting fires, and cooking food, sometimes while carrying infants. The kids perpetuated their own thriving culture with social networks, rules, and games.

When Amir got back to the United States, she experienced culture shock. Suddenly, the American childhood that she also studies seemed strange: overly structured, overly supervised, and solitary. “In America and other Western cultures, much of how children spend their time is determined by adults,” she said. “They go to school, where they don’t have much say about what they’re doing. And then they go home, where many of their play activities are scheduled by caretakers.”

While it would be incorrect to say that the Shuar are living in the past, foraging communities tend to more closely mirror how humans have lived for 99 percent of our time on the planet. So, Amir decided to see how other such groups approach adolescence. Her subsequent research among groups in India and Uganda solidified her suspicions: Western childhood is bizarre.

Amir argues that we’re biologically hardwired to learn through unstructured play and experimentation. What’s more, our shift away from that in the Western world could be contributing to a rise in attention disorders and the spike in anxiety among young adults who leave home for the first time.

What can be done? Amir cautions that not every aspect of Western childhood is problematic. “Children are living the safest lives they’ve ever lived, they’re the healthiest they’ve ever been,” she said. “We don’t want to lose those benefits—but there are probably some benefits that we can integrate from practices we seem to be losing.”

Grant kids independence. “I’ve worked with kids all over the world, and I know that they are extremely bright, responsible, and understand things in a very deep way,” Amir said. So, treat them like small adults. Include them in decision-making and reason with them at a higher level. Assign them tasks around the house and let them use real scissors.

Allow them to make mistakes. “Sometimes we think that if we set kids up for success and they don’t have to deal with failure, we’ll give them a better life,” Amir said. “It feels counterintuitive, but letting them take risks and make mistakes can provide opportunities for learning that we take away when we’re always telling them what the right answer is.”

Set aside time for agenda-less play. “There’s a tendency to think that when children are playing we need to guide them through an activity or teach them something,” Amir said. “But in unstructured play, children are making new connections and discovering more about their world.”

The good news is that these interventions are not expensive, nor do they necessarily require large-scale change. And Amir noted that parenting styles fall along a spectrum. Each family should figure out what works for them.

The benefits of a reimagined childhood could extend to adults, too, Amir said. “We live in a world where there’s a lot of input, and we have an aversion to being bored,” she said. “But I love activities that are less structured—going camping and sitting by the fire, playing tabletop games. Those kinds of things promote creativity and new ways of thinking.”