Assistant Professor of Physics Brian Zhou has received a CAREER Award from the National Science Foundation, which supports junior faculty in the sciences through the Faculty Early Career Development Program.

The five-year $567,000 grant will support the project “Imaging Light-Matter Interactions in Quantum Materials with Nanoscale Quantum Sensors.” Zhou and his team will spatially image the flow of photocurrents inside materials and determine how nanoscale variations affect their generation and transport, according to the NSF announcement.

In addition, Zhou has received a three-year $345,000 award from the NSF’s Directorate of Engineering for his research to develop a quantum-based platform for characterizing nanoscale magnetic materials.

“I am thrilled to receive the generous support from the National Science Foundation,” said Zhou. “These awards will empower the training of students for emerging careers in quantum science and the development of transformative approaches for understanding materials technologies.”

Classical technologies, such as a computer memory or a quartz watch, make use of huge numbers of electrons or atoms, but recently scientists have realized that even a single electron or atom, if it can be harnessed and protected, is enough to serve as a memory or a clock, Zhou said.

“Moreover, these devices would not merely be replacements for classical technologies, but they would allow fundamentally different functionality—a memory with more depth and complexity, or a clock that is as accurate as nature allows,” Zhou said. “This is because matter at these small scales is governed by a totally different set of rules: the laws of quantum mechanics. This is the theme of the field of quantum information science, the field that I work in.”

One focus of his current research is to develop quantum-based systems for measuring magnetic fields.

“You can think of the magnetic needle in a compass as the most basic magnetometer,” Zhou said. “The magnetometer I work with, called the nitrogen-vacancy center in diamond, is actually a magnet made out of a single electron trapped in diamond. Smaller magnetometers not only enable higher spatial resolution magnetic field measurements, but they can be intrinsically more sensitive.”

The two grants will support the exploration of applications of these magnetometers for materials and device development, a core strength of the Boston College Physics Department.

“We are excited about Brian’s research at the interface between quantum and device engineering, as well as the educational opportunities he will provide our students,” said Professor of Physics and Department Chair Michael J. Graf. “These awards are a recognition of both the scientific innovation of Brian’s group and the commitment of our department to fundamental research directed towards impactful future technologies.” 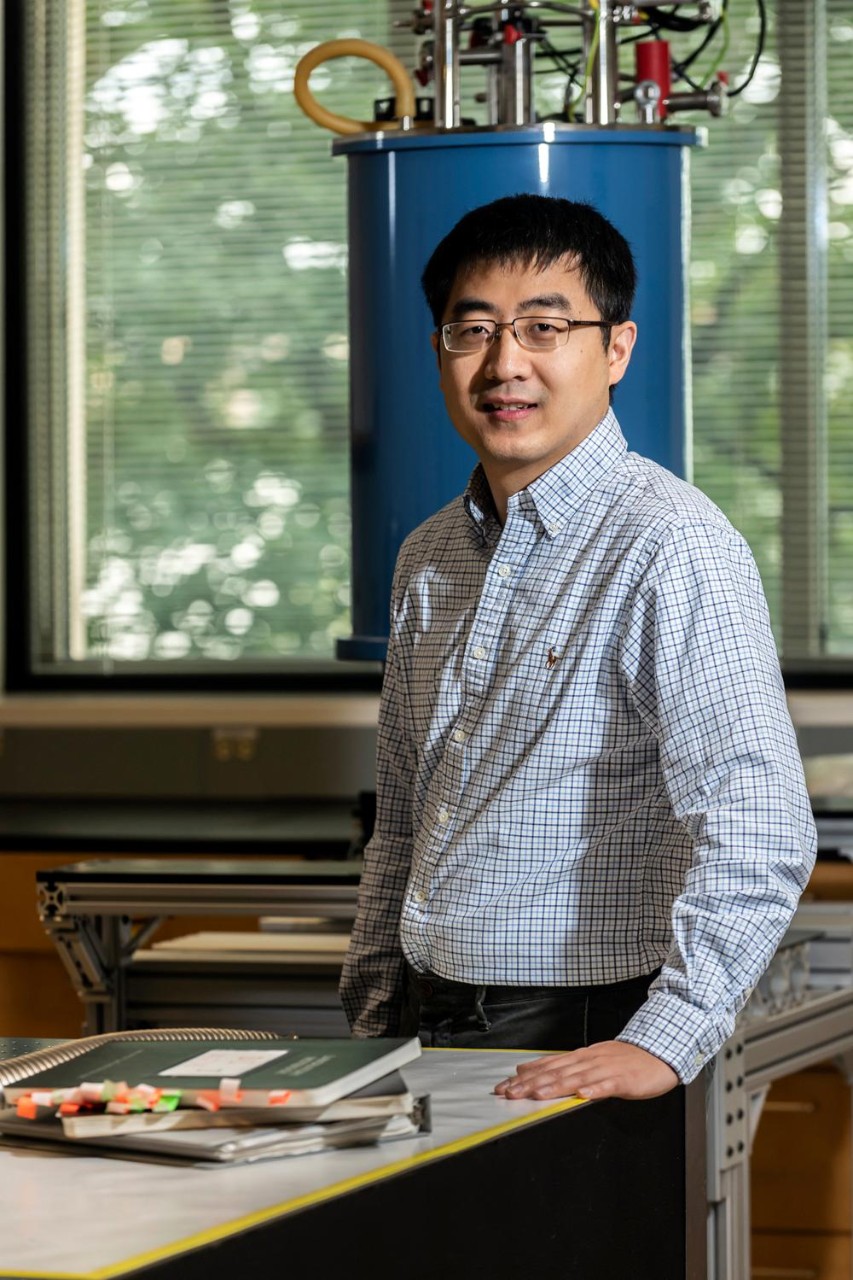 "The research provides fantastic opportunities for both undergraduate and graduate students to gain cross-cutting skills for emerging sectors, such as quantum information and nanomaterial," Zhou said.

Through the CAREER award, Zhou will try to harness these quantum magnetometers to image magnetic fields produced by photocurrents and learn how they flow inside optoelectronic materials, which are used in cameras and solar cells. Zhou also plans to integrate themes from quantum science, materials physics, and data analysis in his teaching.

The other NSF-funded project will involve developing a higher sensitivity system for characterizing ultrathin and microscale magnetic materials, which are very promising for new magnetic memories but cannot be studied by commercial instruments like bulk materials, Zhou said.

Zhou said he looks forward to engaging students in this work, citing the contributions of four undergraduate students who helped shape the direction of his lab with support from the University’s Undergraduate Research Fellowship program.

“The research provides fantastic opportunities for both undergraduate and graduate students to gain cross-cutting skills for emerging sectors, such as quantum information and nanomaterials,” Zhou said. “Students in my lab learn skills through goal-oriented projects using programming, microwave electronics, optics, and nanofabrication. They often work in the cleanroom, which will soon be housed in the new Schiller Institute for Integrated Science and Society building in the heart of campus.”