Detected by Boston College researchers, the axial Higgs mode, and materials that contain it, could support quantum sensors to help answer persistent questions in particle physics

The previously undetectable quantum excitation—known as the axial Higgs mode—is a magnetic relative of the mass-defining Higgs Boson particle.

An interdisciplinary team led by Boston College physicists has discovered a new particle—or previously undetectable quantum excitation—known as the axial Higgs mode, a magnetic relative of the mass-defining Higgs Boson particle, the team reports in the online edition of the journal Nature.

The detection a decade ago of the long-sought Higgs Boson became central to the understanding of mass. Unlike its parent, axial Higgs mode has a magnetic moment, and that requires a more complex form of the theory to explain its properties, said Boston College Professor of Physics Kenneth Burch, a lead co-author of the report “Axial Higgs Mode Detected by Quantum Pathway Interference in RTe3.”

Theories that predicted the existence of such a mode have been invoked to explain “dark matter,” the nearly invisible material that makes up much of  the universe, but only reveals itself via gravity, Burch said.

Whereas Higgs Boson was revealed by experiments in a massive particle collider, the team focused on RTe3, or rare-earth tritelluride, a well-studied quantum material that can be examined at room temperature in a “tabletop” experimental format. 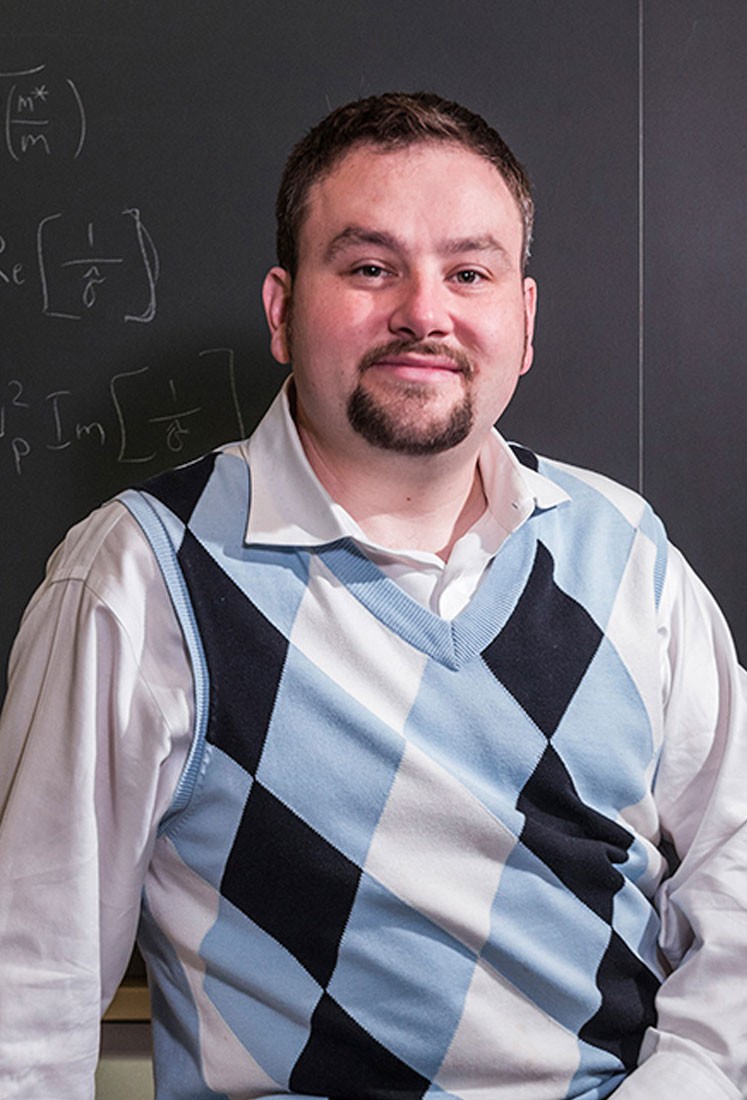 “It's not every day you find a new particle sitting on your tabletop," Burch said.

RTe3 has properties that mimic the theory that produces the axial Higgs mode, Burch said. But the central challenge in finding Higgs particles in general is their weak coupling to experimental probes, such as beams of light, he said. Similarly, revealing the subtle quantum properties of particles usually requires rather complex experimental setups including enormous magnets and high-powered lasers, while cooling samples to extremely cold temperatures.

The team reports that it overcame these challenges through the unique use of the scattering of light and proper choice of quantum simulator, essentially a material mimicking the desired properties for study. Specifically, the researchers focused on a compound long known to possess a “charge density wave,” namely a state where electrons self organize with a density that is periodic in space, Burch said.

The fundamental theory of this wave mimics components of the standard model of particle physics, he added. However, in this case, the charge density wave is quite special, it emerges far above room temperature and involves modulation of both the charge density and the atomic orbits. This allows for the Higgs Boson associated with this charge density wave to have additional components, namely it could be axial, meaning it contains angular momentum.

In order to reveal the subtle nature of this mode, Burch explained that the team used light scattering, where a laser is shined on the material and can change color as well as polarization. The change in color results from the light creating the Higgs Boson in the material, while the polarization is sensitive to the symmetry components of the particle.

In addition, through proper choice of the incident and outgoing polarization, the particle could be created with different components—such as one absent magnetism, or a component pointing up. Exploiting a fundamental aspect of quantum mechanics, they used the fact that for one configuration, these components cancel. However, for a different configuration they add.

“As such, we were able to reveal the hidden magnetic component and prove the discovery of the first axial Higgs mode,” Burch said.

“The detection of the axial Higgs was predicted in high-energy particle physics to explain dark matter,” Burch said. “However, it has never been observed. Its appearance in a condensed matter system was completely surprising and heralds the discovery of a new broken symmetry state that had not been predicted. Unlike the extreme conditions typically required to observe new particles, this was done at room temperature in a table top experiment where we achieve quantum control of the mode by just changing the polarization of light.”

Burch said the seemingly accessible and straightforward experimental techniques deployed by the team can be applied to study in other areas.

“Many of these experiments were performed by an undergraduate in my lab,” Burch said. “The approach can be straightforwardly applied to the quantum properties of numerous collective phenomena including modes in superconductors, magnets, ferroelectrics, and charge density waves. Furthermore, we bring the study of quantum interference in materials with correlated and/or topological phases to room temperature overcoming the difficulty of extreme experimental conditions."

“This shows the power of interdisciplinary efforts in revealing and controlling new phenomena,” Burch said. “It's not every day you get optics, chemistry, physical theory, materials science, and physics together in one work."