Global Observatory on Pollution and Health Director Philip Landrigan, M.D., will be honored for his pioneering work in the health of children and the effects of toxic chemicals on their brains and nervous systems. 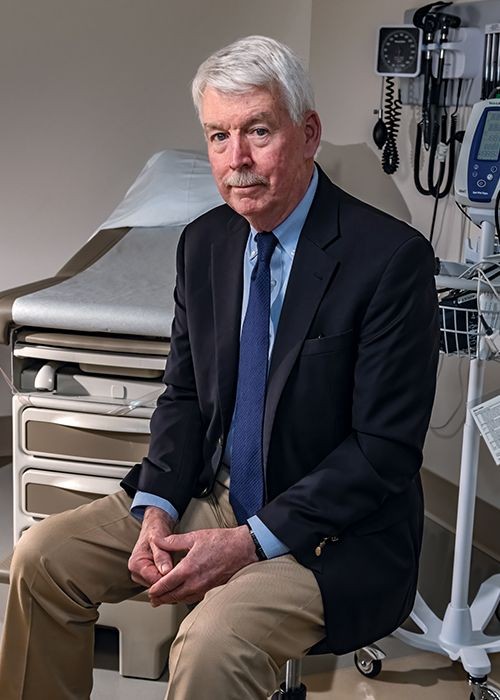 Landrigan, a professor of biology at Boston College who also directs the University's Global Public Health and the Common Good program, will be one of three individuals recognized at the Rodale Institute’s ninth annual Organic Pioneer Awards on Sept. 7.

He and fellow honorees Pennsylvania Governor Tom Wolf and Jennifer Taylor, an associate professor at Florida Agricultural and Mechanical University and an organic farmer, have been cited as “pioneers in the field of linking soil health to human health in the rich tradition of the pioneering work of J.I. Rodale.”

Regarded as the birthplace of the organic movement, the Rodale Institute is a global leader in regenerative organic agriculture. Executive Director Jeff Moyer said the Organic Pioneer Awards offer an opportunity to recognize key figures in the organic community “who often endured personal hardships and professional challenges to make the brave decision to change the way food is produced around the world.”

Landrigan’s nearly five decades of studying the effects of toxic chemicals on children’s brains and nervous systems began in the late 1960s while he was a pediatric resident at Boston Children’s Hospital and cared for children with acute, high-dose lead paint poisoning.

“Most recently, I have become involved in the rapidly growing but neglected problem of toxic environmental exposures to children in low- and middle-income countries,” he said. “From 2015 to 2017, I co-chaired the Lancet Commission on Pollution & Health, which reported that pollution causes nine million deaths around the world each year and is an existential threat to planetary health.”

To continue the work of the Lancet Commission, Landrigan returned to Boston College—from which he graduated in 1963—last year to establish a Global Observatory on Pollution and Health within the soon-to-be-launched Schiller Institute for Integrated Science and Society. The observatory’s core mission is to aggregate, archive, and analyze data on pollution and pollution-related disease in cities and countries around the world in order to guide research; close gaps in knowledge; inform the development of energy and environmental policy; and ultimately save lives.

In addition, Landrigan has been selected by the Prince Albert II of Monaco Foundation to conduct a special report on the health of the world’s oceans that will be distributed at the foundation’s Monaco Ocean Week 2020 conference.

Landrigan will partner with the Monaco Scientific Center on the report, as well as with leading scientists from around the world. The team will review the impact of ocean pollution on human health, with a special emphasis on vulnerable populations. Researchers will further assess the influence of climate change on the oceans and try to predict future trends.

Landrigan traveled to Monaco earlier this year for Monaco Ocean Week, where he was joined by a select group of marine biologists, physicians, and representatives of international non-governmental organizations, including the World Health Organization.

“Ocean pollution has multiple direct and indirect negative impacts on human health and these effects are only beginning to be understood,” Landrigan said. “The purpose of this study is to comprehensively examine these effects, especially effects on the health of children and other vulnerable populations, estimate their magnitude, project future trends, identify gaps in knowledge, and offer feasible, cost-effective solutions.”