Boston College attendees at the U.N. Climate Change Conference reflect on takeaways and the road from here

​Less than a month after traveling to United Nations Climate Change Conference in Glasgow, Scotland—students and faculty who attended as part of the University’s first accredited delegation are sharing their experiences with the Boston College community.

They are also working on steps they can take, be it through their scholarship or personal lives, to work at reducing the environmental and climatological harm done by a range of human activities across the globe.

“It was electric and amazing,” said Environmental Studies Program Director Tara Pisani Gareau of the atmosphere among the roughly 38,000 delegates attending COP26 (Congress of the Parties). “You were surrounded by people from so many different countries and cultures and striking up conversations with people from every part of the world.” 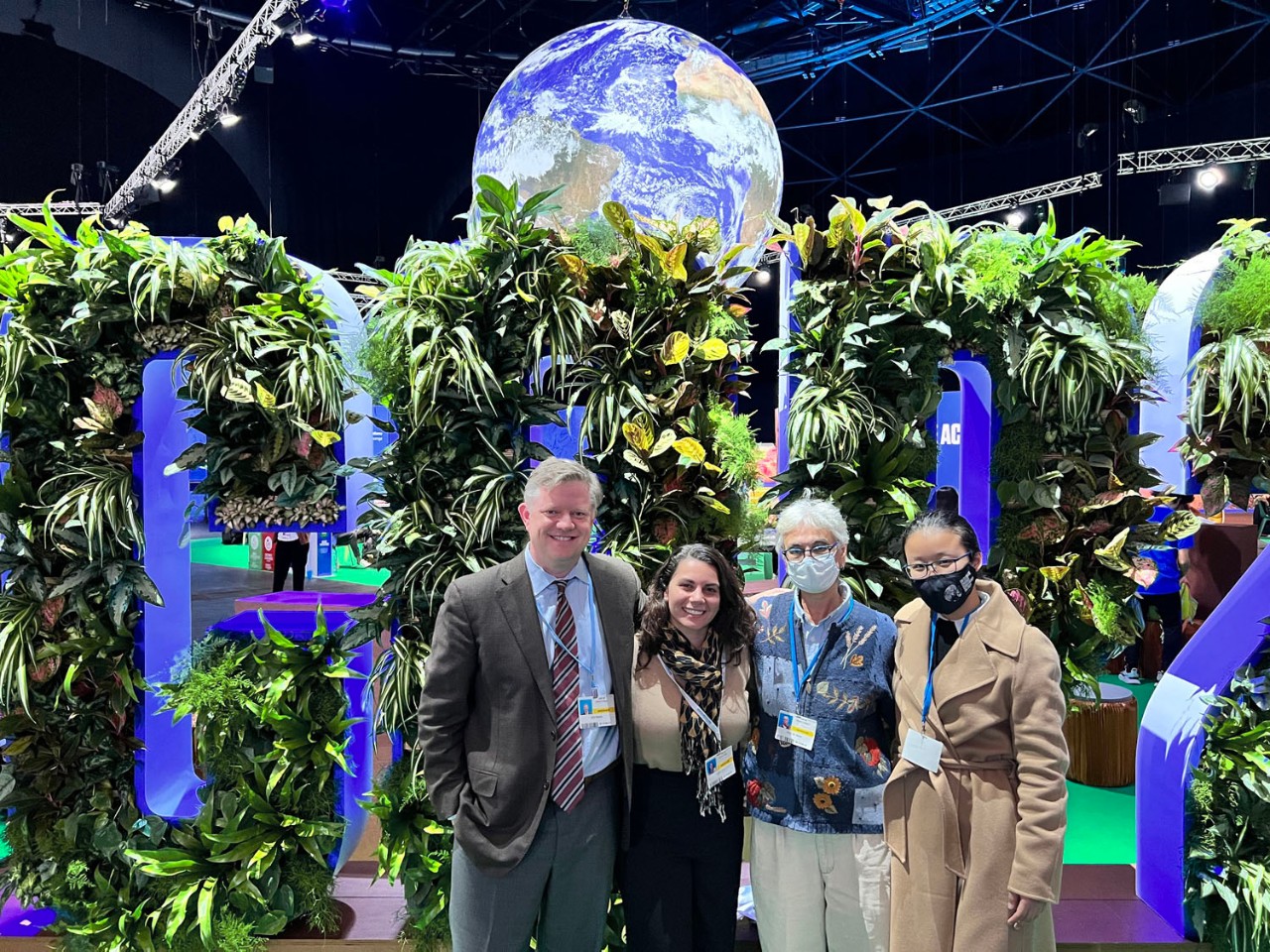 The granting of observer status, secured through efforts of faculty led by BC Law School Professor David Wirth—who did not travel to COP26 himself—offered a unique opportunity to the delegation to attend events organized around the negotiations among parties to the United Nations climate pact. The selection also reflected BC’s academic and research strengths on the issue of climate science and policy.

Gareau, one of eight faculty members in the BC delegation, attended the first week of the summit, where officials negotiated a global pact to fulfill carbon-cutting pledges that grew out of the Paris Agreement, reached at the 21st COP in 2015.

Since returning from Scotland, Gareau and the five students who attended as part of the delegation have participated in several speaking programs, including a virtual presentation to students at Boston Green Academy and a visit to a BC class titled Climate Storytelling.

Students will be part of a panel discussion on January 24 at noon in BC’s new integrated science building at 245 Beacon St., Gareau said. Delegation members are also working out a schedule for additional programs as part of an ongoing series of conversations about faculty research on climate science, she said. 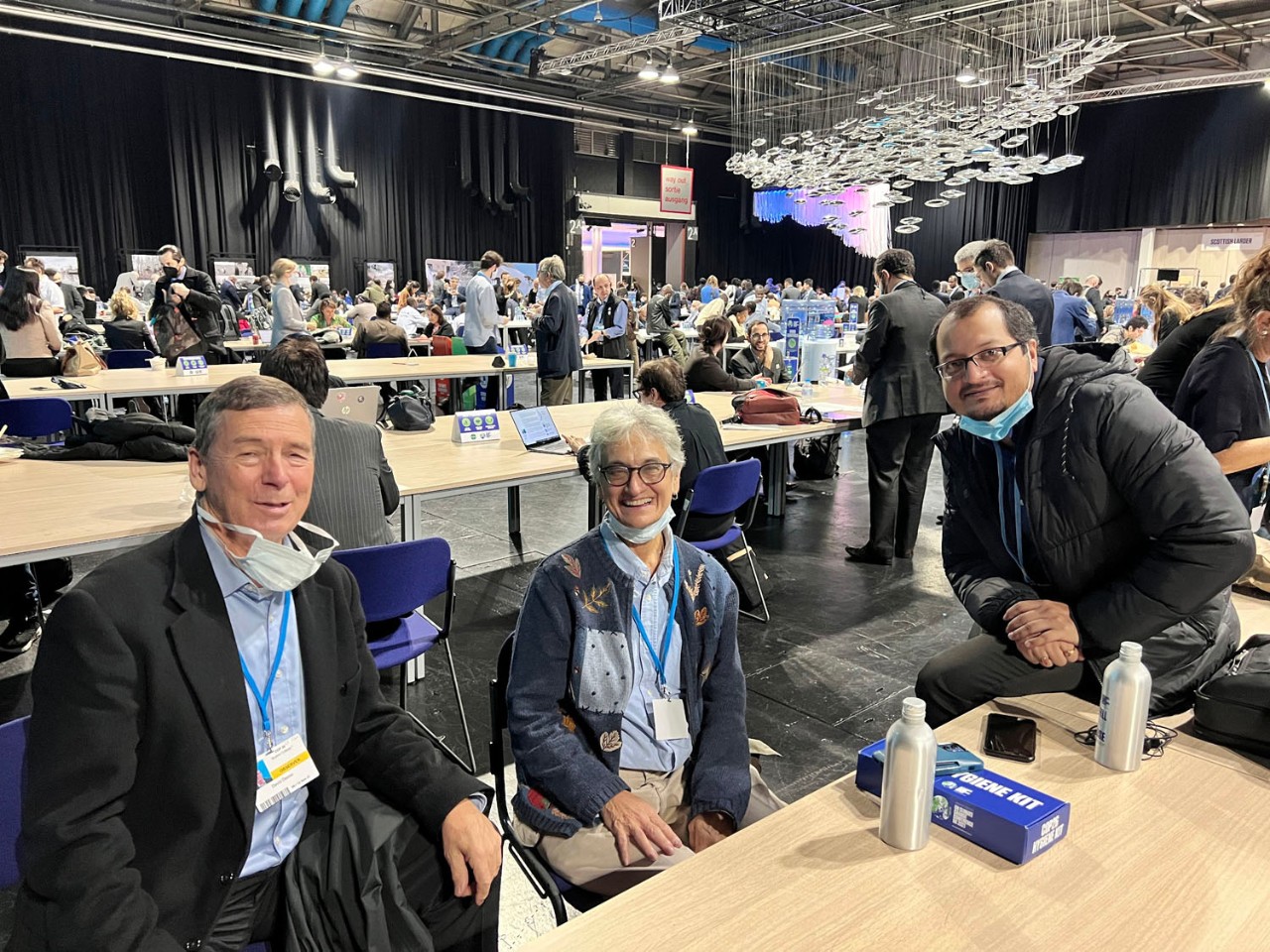 Gareau also hosted a visit by one of the many people she met at COP26, Gopal Patel, the founder of the nonprofit Bhumi Global, which works to encourage Hindus to take environmental action, and a co-chair of the UN’s multi-faith advisory council. There are plans to bring Patel back for a campus talk next spring.

Visiting Associate Professor of Computer Science Rafael Ubal Tena documented his experience at COP26 on video, with interviews and reporting from the events.

“I made it my mission about two years ago to educate students on this matter, both through YouTube videos and in person, in spite of my area of expertise [computer science] being seemingly unrelated,” said Ubal. “Our ecological degradation is a topic that should be present in every field and space. Attending the COP raised a lot of curiosity and interest among my students.”

Associate Professor of the Practice of Philosophy David Storey recorded interviews with attendees to examine a range of issues surrounding climate change. He expects the experience to shape his teaching and research.

“I work on climate change ethics, and one thing that COP26 drove home for me is that energy is everything,” said Storey. “During a panel on the potential of green hydrogen, Tara and I started talking about the ethical issues around not just fossil fuel energy but ‘clean’ and ‘green’ energy, such as the mining of cobalt, a key resource for lithium-ion batteries, in the Congo. So, I decided that next year, I will teach a course on energy justice, and pursue research on the ethical dimensions of energy politics and policy.” 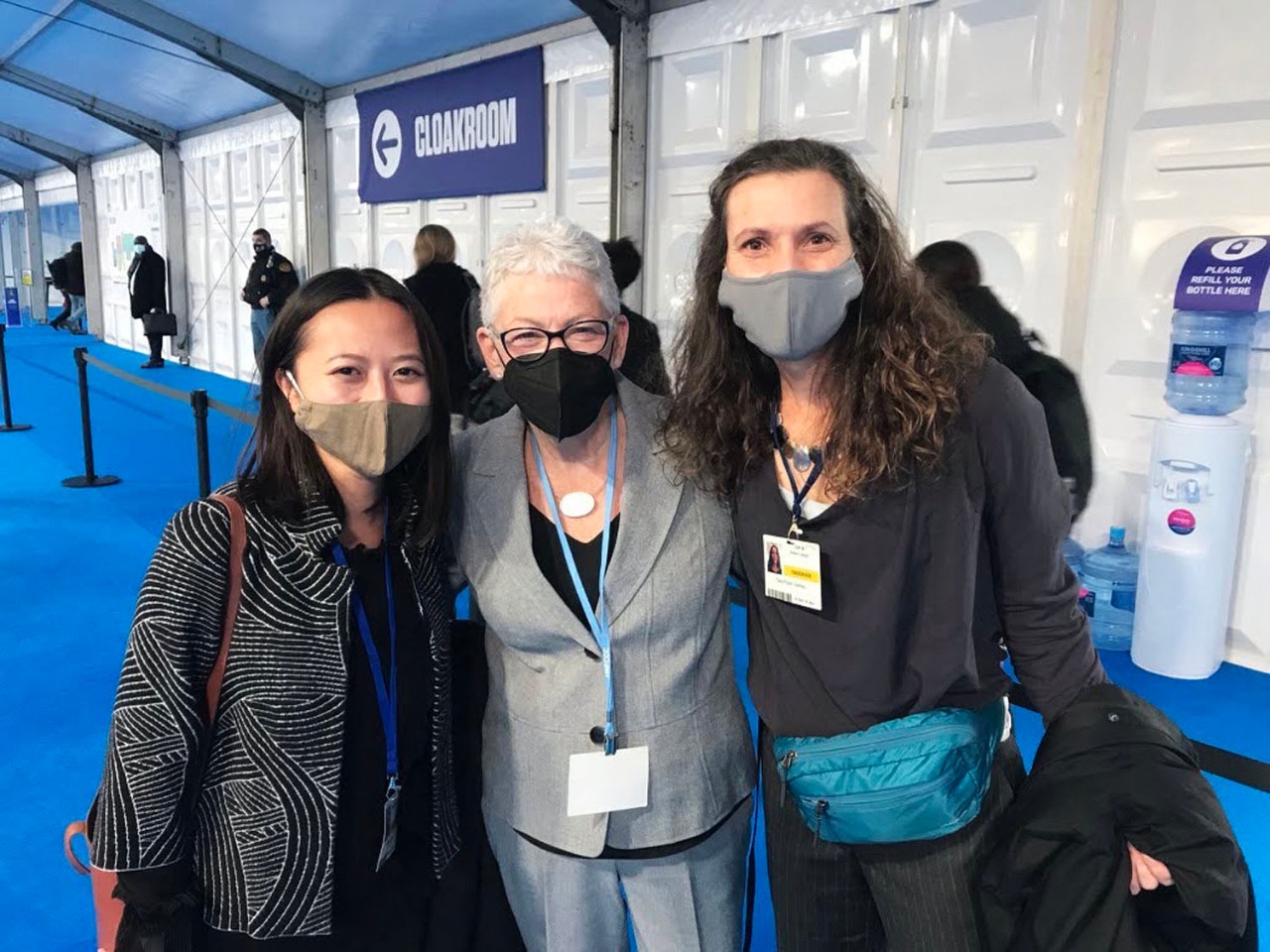 BC delegates said the experience exposed the massive challenges to creating coordinated global action, yet also offered a glimpse of the grassroots activism needed to make serious progress.

“My biggest takeaway was, though this conference is extremely important and there are very important things being decided, the way these lessons get translated into action is through individuals,” said Ginny Alex, a senior in the Lynch School of Education and Human Development. “Regulations are essential, but people who are passionate to teach, act, and create change are equally important to reaching our climate goals.”

Delegates said personal encounters struck a chord. Gareau met the finance minister of Jamaica and an undersecretary of state from Libya as the three searched for a meeting room. Students were impressed by the life stories of citizen delegates from around the world.

“I was most inspired by the Indigenous representatives from across the globe who spoke about the effects of climate change in their communities,” said Connell School of Nursing graduate student Nicola Roux. “As the defenders of their ancestral lands and this planet, these communities are often affected most by and expected to solve a climate crisis that they have contributed very little to causing.

“Attending COP26 has reignited my belief that we must keep people at the center of climate solutions and that planetary health must be incorporated into everything I do as a nurse as it is so inextricably tied to human health.” 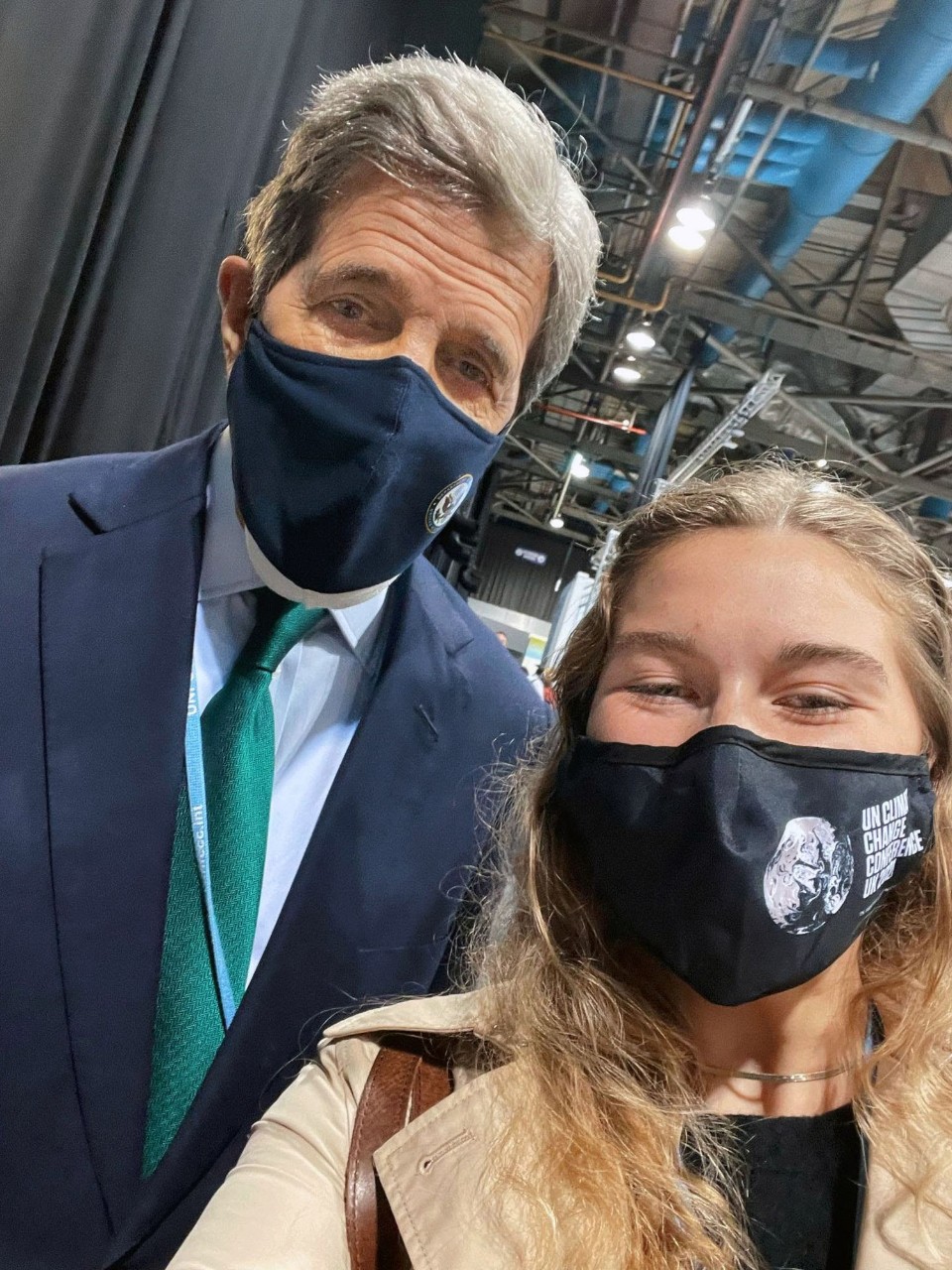 Morrissey College of Arts and Sciences junior Julia Horchos said conversations with delegates, like the one she had with a young man from Nepal, offered unique perspectives on the climate crisis.

“My experience at COP26 has made me excited to take an active role in international climate policy,” Horchos said. “I hope to combine my passions in environmental studies and political science to aid in the creation of climate change-based legislation or litigation of environmental cases. It is evident that there is much to be accomplished within the field of climate policy, and the responsibility of achieving that goal lies in the hands of my generation.”

Alex, an applied psychology and human development major who plans to attend law school, experienced an “aha” moment at a World Health Organization talk on climate justice and mental health.

“As the panelists began to speak it became clear that the discussion was far more focused on the mental health of climate migrants, which was a population I had never considered studying in my research. Throughout the session, the biggest takeaway was that though there are many anecdotal experiences that can serve as evidence, there is not enough empirical data to support any strong statements. At that moment, I was inspired to be one of the people to help collect that data in the future.”

Funding to support the delegation came from the University Fellowships Committee in the Provost’s Office, the Dean’s Office of the Morrissey College of Arts and Sciences, the Office of Global Engagement, the Environmental Studies Program, the Longergan Institute, Schiller Institute for Integrated Science and Society, and the Global Public Health and the Common Good Program.