Inspired by naturally occurring processes, a team of Boston College chemists used a multi-catalyst system to convert carbon dioxide to methanol at the lowest temperatures reported with high activity and selectivity, the researchers reported in a recent online edition of the journal Chem.

The team’s discovery was made possible by installing multiple catalysts in a single system constructed within a sponge-like porous crystalline material known as a metal-organic framework, said lead authors and Boston College Associate Professors of Chemistry Jeffery Byers and Frank Tsung.

Held in place by the sponge, the separate catalysts work in harmony. Without isolation of the catalytically active species in this way, the reaction did not proceed and no product was obtained, they reported.

The team drew its inspiration from the biological machinery in cells, which use multicomponent chemical reactions with great efficiency, Tsung said. 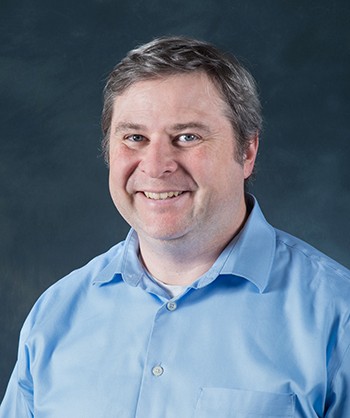 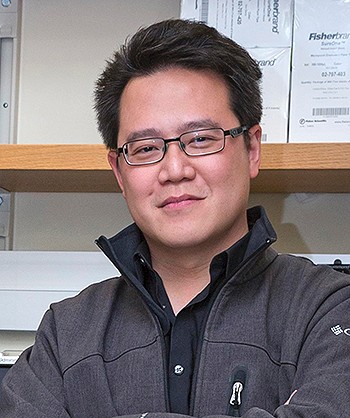 The team employed catalyst separation through host-guest chemistry—where a “guest” molecule is encapsulated in a “host” material to form a new chemical compound— in order to convert carbon dioxide to methanol. The approach, inspired by the multicomponent catalytic transformations in nature, converted a greenhouse gas to a renewable fuel while avoiding high catalytic demand on a single species.

“We accomplished this by encapsulating one or more catalysts in metal-organic framework and applying the resulting host-guest construct in catalysis in tandem with another transition metal complex,” said Tsung.

The team, which included graduate student Thomas M. Rayder and undergraduate Enric H. Adillon, set out to determine whether they could develop an approach to integrate incompatible catalysts in order to convert carbon dioxide to methanol at low temperature and with high selectivity, said Byers. 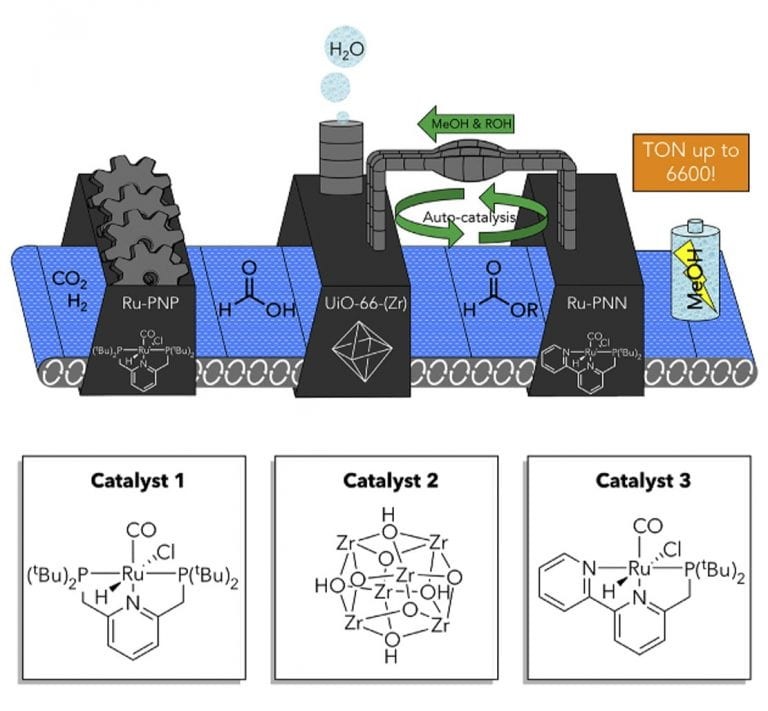 Boston College researchers used three different catalysts in one system to transform, in three steps, the greenhouse gas carbon dioxide to methanol, a liquid fuel that serves as a promising method for hydrogen storage. The first catalyst converts carbon dioxide and hydrogen to formic acid, which is then modified by a second catalyst to form an ester, incorporating an alcohol additive and producing water. The third catalyst in the system, which is typically incompatible with the first catalyst, then converts this ester to methanol. The team was able to perform this multistep reaction in one reaction vessel despite using two incompatible catalysts by encapsulating one in a porous framework that also acts as the second catalyst.

Specifically, they wanted to find out if there are specific advantages to this approach when compared to current state of the art systems for transition metal complex-based conversion of carbon dioxide to methanol.

“Positioning multiple transition metal complex catalysts at the right position in a system is critical to the reaction turning over,” said Byers. “At the same time, encapsulating these catalysts allowed for recyclability in the multicomponent catalytic system.”

These properties make the multicomponent catalyst construct more industrially relevant, which may pave the way for a carbon-neutral fuel economy, the researches said.

In addition to achieving site isolation by encapsulating the catalysts, which led to catalyst activity and recyclability, the team discovered an autocatalytic feature of the catalyst that enabled the reaction to be run without the need for large amounts of additives. Most previous reports for similar reactions use large amounts of additives, but the team's approach avoids this necessity.

The team plans to do further research into the modularity of both the encapsulation method and the metal-organic frameworks to gain a deeper understanding of the multicomponent system and optimize it further, as well as access new, unexplored reactivity through the formation of new host-guest constructs, Tsung said.