The cause of type 1 diabetes remains unknown and is a central focus of Boston College Assistant Professor of Biology Emrah Altindis and others in his field hoping to find new ways to help 1.6 million Americans living with the chronic autoimmune disease, a group that is expected to increase to 5 million people by 2050.

While genetics studies have identified mutations that increase the risk of developing type 1 diabetes, the gene pool alone cannot fully explain who is susceptible to the disease. Altindis and colleagues have been probing the interconnectedness of gut microbiota, the immune system, and the pancreas in the search for answers and a lead on potential paths to combat the disease, which disables the body’s ability to regulate blood glucose levels.

In his latest work, Altindis and his colleagues for the first time identified a gut microbe that can accelerate type 1 diabetes onset in an animal model, the team reported in the journal of the Proceedings of the National Academy of Sciences. Notably, comparing their findings to a clearinghouse of sequencing data for the type 1 diabetes microbiome indicates that exposure to this bacterium at an early age increases the risk to develop type 1diabetes in children at genetic risk of the disease. 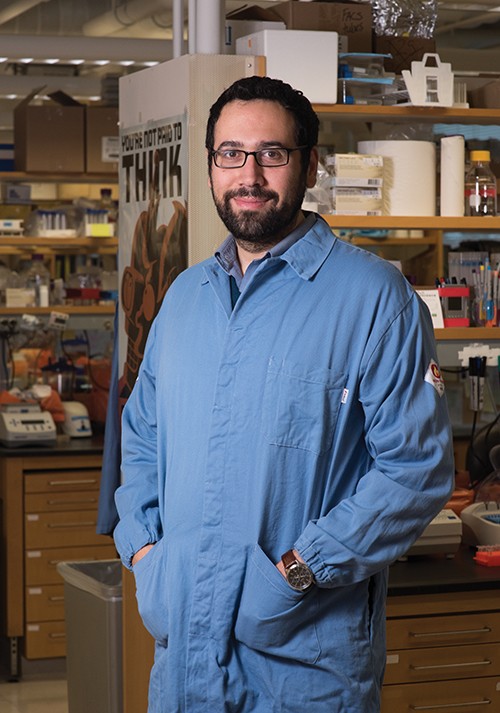 According to the Juvenile Diabetes Research Foundation (JDRF), there are 1.6 million Americans living with this chronic disease and this number is expected to increase to 5 million by 2050.

“Although we have known type 1 diabetes for thousands of years, its cause is unknown,” said Altindis, whose research is supported by the National Institutes of Health, G. Harold and Leila Y. Mathers Charitable Foundation, and JDRF. “While genetics studies have identified mutations in some human genes that increase the risk of developing type 1 diabetes, genetics alone cannot fully explain the increasing incidence rates in the world, specifically in industrialized countries.”

A central question for researchers is what turns the body’s immune system against itself.

"The primary role of the immune system is to recognize self and non-self and protect the body from the non-self,” Altindis said. “When this recognition system is impaired, our immune cells start to attack not only foreign cells but also our own cells. This impaired mechanism of immune system causes autoimmune diseases.”

However, those studies did not establish a causal relationship between the microbiome and type 1 diabetes. “In this study, we identified a gut bacterium that is potentially linked to the disease onset,” Altindis said.

When the immune system detects a foreign particle, it starts to produce proteins called antibodies to destroy it. In autoimmune diseases, autoantibodies and immune cells target human proteins and insulin is the main target of the immune system in type 1 diabetes. Altindis and his colleagues have focused on molecular mimicry, a mechanism of autoimmune disease in which a foreign antigen that shares a structural similarity with a host protein can modify disease pathogenesis.

“Based on the central role of insulin in type 1 diabetes autoimmunity, we hypothesized that type 1 diabetes is caused by a molecular mimicry mechanism in which exposure to a microbial insulin stimulates the immune system against human insulin,” Altindis said.

“There is more work to do, however this study and similar studies have the potential to guide us to develop new tools, including vaccines, antibiotics, or probiotics, for the prevention and treatment of type 1 diabetes.”

Previously, Altindis and his team made a surprising discovery and showed that viruses have insulin-like proteins. In the latest project, they focused on an insulin region, specifically a peptide, or a chain of amino acids—known as the B chain of insulin, or B:9-23—that is targeted by the immune cells in type 1 diabetes patients and identified mimics of this region in different microbes.The team hypothesized that because human insulin B:9-23 and microbialinsulin B:9-23 will be very similar, immune cells cannot distinguish the difference and an immune response to this bacterial B:9-23-like peptide will cross-react with the insulin and consequently will target and destroy the cells that produce insulin.

Colonization of the gut microbiome with Parabacteriodes distasonis increased type 1 diabetes rates by increasing the inflammation in different tissues, specifically in the pancreas, in mice used in type 1 diabetes T1D research, the team reported in the article "A Gut Microbial Peptide and Molecular Mimicry in the Pathogenesis of Type 1 Diabetes."

This bacterium is most likely present in the human gut, however, the study indicates that the timing of exposure is important for the development of type 1 diabetes. The team then re-analyzed published human gutmicrobiome data, obtained from the Broad Foundation’s DIABIMMUNE project, to show that children up to age three tend to develop type 1 diabetes if they are exposed to this peptide/bacterium in early life.

“Our findings analyzing published human type 1 diabetes microbiome dataobtained from 269 infants gut microbiome, sampled from ages 0 to threeyears, supports our hypothesis that being exposed to this bacterium, and more specifically to this insulin B:9-23-like bacterial peptide, in the first three years of life is a potential risk factor,” said Altindis.

Identifying the presence of the peptide is a significant step, said Altindis, who collaborated on the project with C. Ronald Kahn, MD, of the Joslin Diabetes Center, researchers at the University of Florida and the Benaroya Research Institute, and a BC team including post-doctoral researcher Khyati Girdhar, BC’s Flow Cytometry Lab Director Patrick Autissier, and undergraduate student researchers Claudia Brady and Amol Raisingani.

But there is much more work to be done, he added.

“While in this study we showed that the human immune cells that were specific to human insulin B:9-23 were reacting to the P. distasonis peptide and that P. distasonis can enhance type 1 diabetes development in the the mouse model, we have to prove that this enhancement is directly related to the peptide,” Altindis said.

To prove that, Girdhar is making a mutation in the bacterial genome by deleting the mimic peptide and will test its effects on the animal model, Altindis said. The team will also analyze another, more comprehensive type1 diabetes study, known as TEDDY.

“If these studies support our findings, this will support our initial molecular mimicry mechanism,” Altindis said. “There is more work to do, however this study and similar studies have the potential to guide us to develop new tools, including vaccines, antibiotics, or probiotics, for the prevention and treatment of type 1 diabetes.”