Predicting the future of COVID-19

Efforts to contain the spread of SARS-CoV-2 may benefit from a new analytical tool developed by a team led by biologists at Boston College, who report their computer simulation of molecular interactions can predict mutations of the virus and help develop insights into future variants of concern before they emerge.

“We computationally predict what mutations allow better binding to host receptors and better evasion of antibodies,” said Boston College Assistant Professor of Biology Babak Momeni, a lead researcher on the project. “Such mutations can potentially lead to a future variant of concern. Having this knowledge from our model would help with readiness for detecting and preventing, as well as treating, emerging and future variants.”

Quantum mechanical modeling allowed the team to develop an initial set of predictions about the role of mutations on infectivity and immune response evasion of Omicron and other SARS-CoV-2 variants with human host cells, Momeni said.  The spike protein of the coronavirus, or SARS-CoV-2, binds to ACE2, a receptor on the host cells, which allows the virus to enter the cells and infect it. Binding is the first step for infection, and several mutations in previous variants of concern have been shown to be important for increasing the spike's binding to human ACE2.

“We simulated the electronic structure of the two interacting molecules and assessed how amino acids of the spike and ACE2 interacted with their counterparts. We also evaluated how mutating individual amino acids could change the interaction.”

Researchers have deployed a number of computational methods to examine the spike-ACE2 interaction. The ab initio quantum mechanical model approach, which is focused on the electron structure, is considered to be highly accurate and able to examine both short-range and long-range interactions among amino acid residues, Momeni said.

The Omicron variant of the coronavirus is suspected to be the most infectious yet by binding to human receptors better than the Delta variant and the team’s findings show it may have the potential to continue to evolve even stronger binding to increase transmission and infectivity, according to a pre-print of a new study completed by the team. 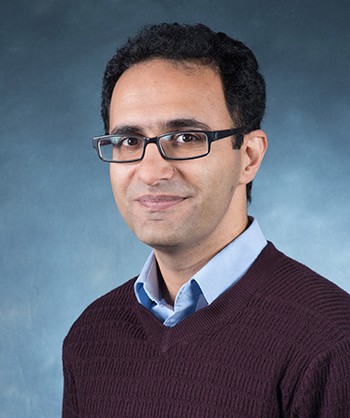 The spike protein of the coronavirus, or SARS-CoV-2, binds to a receptor on the host cells, called ACE2, which allows the virus to enter the cells and infect it. Binding is the first step for infection, and several mutations in previous variants of concern have been shown to be important for increasing the spike's binding to human ACE2.

“We use a fully quantum mechanical model to theoretically assess how different mutations in the spike can contribute to its increased, or decreased, binding strength to human ACE2,” Momeni said. “The modeling shows that Omicron binds to receptor proteins stronger than the currently dominant Delta variant.”

In addition to Momeni, Boston College Professor of Biology Welkin Johnson and post-doctoral researcher Marco Zaccaria, Luigi Genovese of French CEA - University of Grenoble Alpes, and Professor Michael Farzan of the Scripps Research Institute, contributed to the report "Investigating the mutational landscape of the SARS-CoV-2 Omicron variant via ab initio quantum mechanical modeling,” which is available at the pre-print host site bioRxiv.

“We find that Omicron has not reached its full potential to bind human host cells,” Momeni said. “We identify mutations that can strengthen the virus affinity for the human cell, which could increase infectivity and evasion of antibodies.” He cautioned that increased infectivity is only one important aspect in variants of concern; it is also important to monitor the severity of symptoms and the ability of the variant to evade antibodies and vaccines.

While the study found that Omicron’s spike proteins bind better than the Delta variant to the human ACE2 receptor, not all mutations in the spike protein’s targeting system—known as a receptor binding domain—are beneficial for binding, which suggests factors other than binding may also be involved in determining how the variant evolves.

One possible explanation is that the variant has acquired mutations to evade host antibodies, Momeni said. Such mutations can be detrimental to its binding to the host receptor and were followed by additional compensatory mutations to recover, or even improve, its receptor binding.

Momeni said the team was surprised to see a range of mutations—some beneficial, some neutral, and some detrimental—to hACE2 binding. He said the team’s next steps are to experimentally validate the predictions of the model.

The team’s findings on Omicron build upon a prior analysis of the Wuhan and Delta variants by the team. There, modeling found that E484 was actually a “weak link” in the original Wuhan strain, but it has evolved through mutation to better bind to human host cells and to evade some antibodies, Momeni said. Additionally, the team found that the Wuhan strain binding to ACE2 in bats was more optimized than the human counterpart. The team predicted further E484K mutation added to the Delta variant would produce a future variant of concern.