A population in peril 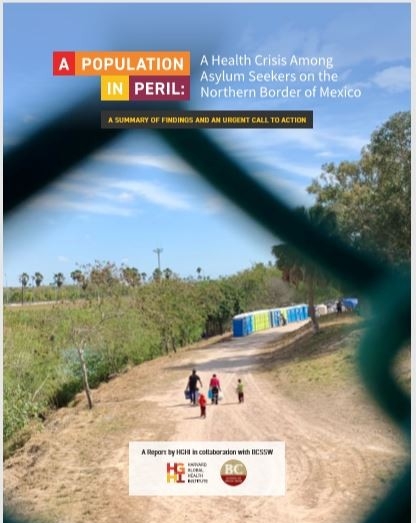 Desperate scenes of hazardous living conditions are depicted in the study, co-authored by BCSSW Assistant Professor Alejandro Olayo-Méndez, S.J: shelters with populations up to three times their capacity; encampments where thousands share a handful of outdoor showers and portable toilets; insufficient access to clean water, forcing some migrants to bathe in the contaminated Rio Grande; and people of all ages receiving little or no care for PTSD, depression, and other mental health problems.

In “A Population in Peril: A Health Crisis Among Asylum Seekers on the Northern Border of Mexico,” Fr. Olayo-Méndez and his co-authors call for “a comprehensive response” to the crisis, including changes in U.S. and Mexican polices regarding migrants and asylum seekers and coordinated health care efforts involving both governmental and non-governmental actors.

“The full extent of the health crisis at the border has yet to be documented,” states the report, “but it is clear that it is growing. As such, sustainable solutions are needed now more than ever.”

Fr. Olayo-Méndez’s BCSSW colleague Professor Thomas Crea was among those aiding in the ideation of the report.

While health concerns about migrants and asylum seekers have been given public exposure through advocates and media coverage, the HGHI-BCSSW report aims to provide a far-reaching basis for assessing needs and formulating responses. Its findings are based on data collected by international NGOs, reporters, and service providers, and augmented with testimonials—including some collected by Fr. Olayo-Méndez last year—from individuals on the Mexican border.

“The report is an effort to show the situation from different angles, and through different voices, as a humanitarian crisis rather than a ‘security crisis,’” said Fr. Olayo-Méndez, who has studied the intersection of humanitarian aid and migration, as well as questions regarding human rights, inequality, transit migration, meso-level structures, and the so-called “Migration Industry.”  “We wanted to stress the public health conditions, and especially the mental health implications for migrants, who have already endured so much to reach the border.

“There is an important role for the social work profession here, because of the big-picture perspective we bring: how to serve and advocate for migrants in a holistic way, and to work with the staff that serves this population on the ground.”

“The more evidence we present, the more light we throw on the situation and, our hope is, the more voices will join together to demand a change . . . Above all, we want to make sure that people know what is going on at the border, to cut through the political dimensions and focus on the human aspect.”

The health crisis at the U.S.-Mexico border has been building for the past two years, according to Fr. Olayo-Méndez and his co-authors, in the wake of policy changes and practices enacted or encouraged by the Trump administration that affect migrants’ ability to seek asylum—a right guaranteed under U.S. law. One is “metering,” which restricts the number of migrants requesting asylum each day at a U.S. point of entry, requiring them to remain in Mexico for their turn to state their claim for asylum. Another is the Migrant Protection Protocols, or MPP, where asylum seekers who have already been received and inspected by the U.S. government must wait in Mexico for their legal proceedings.

The result has been a logjam at entry points along the U.S.-Mexico border, according to “A Population in Peril.” Since January of 2019, under the MPP, the U.S. government has sent more than 64,000 individuals to Mexico to await legal proceedings; of these, 537 have been granted leave to stay in the U.S., and the average wait time for the initial immigration court date is almost 90 days. They have been joined by thousands more would-be asylum seekers idled by metering. The asylum process often takes three or more interviews before a decision is made. For now, during this time, asylum seekers have to wait in Mexico.

Meanwhile, the report notes, where in past years the typical U.S.-bound migrant was most likely to be a single adult, it is now persons in family units or unaccompanied minors who form the majority: The 64,000 people sent to Mexico under MPP included at least 16,000 children and 500 infants less than a year old. Increasing numbers of these migrants are fleeing poverty or violence, and given the arduous journey many take—often facing personal as well as financial danger—they are likely to arrive at the border physically and emotionally depleted. Some, such as mothers, pregnant women, and LGBTQI individuals, are at particularly high risk.

Entry points along the border where asylum seekers must wait are scarcely safe havens, given the spike in demand for essential services like food, shelter, water, and medical supplies. Casas de migrantes—shelters run by faith-based organizations—are typically “underfunded and overburdened,” often forced to ration food or charge for room and board, while rented rooms tend to be costly, overcrowded, and located in unsafe neighborhoods. The options for asylum seekers are to squat in abandoned buildings, sleep in the streets, or join makeshift, large-scale tent encampments.

The report was largely researched and compiled before the COVID-19 pandemic took hold, and thus does not address its impact. But Fr. Olayo-Méndez said the coronavirus has unquestionably put a further strain on services and contributed to the overall stress and anxiety among the migrants and those aiding them. [Read more in an opinion piece by the research team on COVID-19 at the border.] 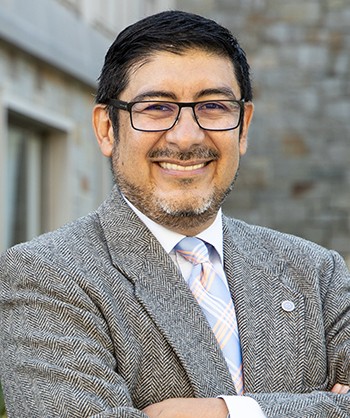 “A Population in Peril” concludes with recommendations for the U.S. and Mexican governments, such as ending MPP and metering; allocating more resources to hire immigration judges; reinstating family case management systems; increasing federally supported accommodation capacity; and developing a long-term, strategic health care plan for asylum seekers. It proposes that NGOs, civil society organizations, and academic centers create educational materials for asylum seekers; empower religious leaders to deliver information on migrants’ health care rights and services available to them; advocate against governmental policies and practices harmful to asylum seekers; and promote the needs of migrants in high-risk populations, such as the LGBTQI community.

Fr. Olayo-Méndez acknowledges that the current political situation in the U.S. or Mexico does not augur well for the report’s recommendations, but believes the project has been worthwhile. “The more evidence we present, the more light we throw on the situation and, our hope is, the more voices will join together to demand a change—and that the mounting voices will generate a response from both sides. Above all, we want to make sure that people know what is going on at the border, to cut through the political dimensions and focus on the human aspect.”

“The findings of this report make it abundantly clear that the human condition of migrants at our doorstep is precarious,” said BCSSW Dean Gautam Yadama. “These migrants are not only facing a health crisis but a crisis of declining social, economic, and legal rights. The result is a people on the move, a generation of children and families, robbed of their human dignity and life chances.

"I am pleased that the Boston College School of Social Work—and our colleague Alejandro Olayo-Méndez in particular—was able to contribute to this report on a very important humanitarian issue."