Stories from the field

A podcast highlights tales from scholars and students in political science

​Books are frequently adapted into film, but Associate Professor of Political Science Peter Krause’s 2020 co-edited volume, Stories from the Field: A Guide to Navigating Fieldwork in Political Science, has been converted into a different medium: a companion podcast.

Krause, along with the book’s co-editor Ora Szekely, an associate professor of political science at Clark University, co-host their book-based, 13-episode podcast that launched in late January, and concludes this month.  The production has drawn more than 1,000 listeners to date.

“I worked on the podcast production with my research team of students, who helped plan, produce, and edit the episodes,” said Krause, whose book was described by reviewers as a “relatable, thoughtful, and unorthodox guide to field research in political science” featuring personal stories—“some funny, some dramatic, all fascinating and informative”—from 44 working political scientists. “Field research, regardless of where and how it is conducted, poses numerous ethical and logistical challenges, which the podcasts are designed to help the listener navigate,” he said. 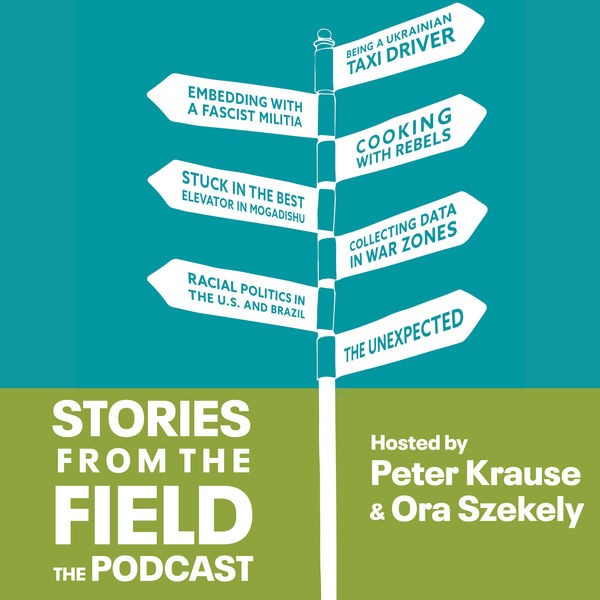 The duo started by releasing a 30-minute introductory installment in late January on the origins of their fieldwork book, and previewed the upcoming podcasts, which are composed of a 10-to 15-minute interview with each of the guests, followed by a 20-to-30-minute roundtable discussion. New episodes are published every Tuesday and the podcast is available via iTunes and Spotify.

“We talk to political scientists about what actual field research looks like on the ground,” said Krause, a research affiliate with the MIT Security Studies Program who has conducted extensive fieldwork throughout the Middle East. “In each episode, we bring together a diverse collection of experts to discuss different ethical and logistical aspects of the field research process. We have scholars discussing their field experiments, surveys, archival research, policy work, and ethnology of all kinds, across a broad geography, including studies conducted in Africa, South Asia, South America, China, the Middle East, and in the United States.”

Krause, Szekely, and their guests also discuss some of the resourcefulness tests that political scientists face, such as how to develop local knowledge, conduct research in authoritarian states, and how to grapple with the ethical dilemmas posed by funding sources.  In short, Krause calls it a “look behind the curtain.”

The first episode, “Developing Local Knowledge,” features political scientists Christina Greer of Fordham University, Northwestern University’s Wendy Pearlman, and Paul Staniland of the University of Chicago.  The second episode dives into ethics with Erica Chenoweth, professor of public policy at the Harvard Kennedy School and the Radcliffe Institute for Advanced Study, and Zachariah Cherian Mampilly, the director of Africana Studies and associate professor of political science and international studies at Vassar College.

Other episodes include “Positionality, Emotions and Research in the Middle East,” “Creatively Collecting Information” (with Krause’s fellow BC political scientist Associate Professor Lindsey A. O’Rourke), “Conducting Research Amidst Conflict,” “Health and Safety When Doing Field Research,” and “Research in China,” which showcased another BC political scientist, Professor Robert S. Ross.

“This episode captures well the difficulties of conducting interviews with friends and colleagues in China,” said Ross. “Scholars must balance their research interests with the overriding value of respecting the interests of friends and colleagues working in a system that can impose significant constraints on scholars who exercise academic freedom.”

“The final three episodes focus on teaching and learning fieldwork methods,” said Krause, whose teaching interests include Middle East politics, terrorism and political violence, and international relations. “We interview professors who have taught with our book about how they teach fieldwork, and how the book has been used, whether successfully or unsuccessfully. The closing episode examines various types of field research and COVID-19, and the challenges, both logistical and ethical, of conducting fieldwork during and after the pandemic.”

The second-to-last episode features discussions with graduate and undergraduate students who have learned from Stories from the Field, including seniors Leah Hickert, Jack MacDonald, and Sofia Renata Martinez, all of whom were students in Krause’s Research Methods in Political Science class last fall. They and other guests explain how students can best to use the book to start their own fieldwork.

Interviewed recently, the three BC undergrads reflected on their before-and-after views of the research methods class.

“I was intimidated, but I took the class because, honestly, I was uninformed,” said MacDonald.  “It forced me to grow very quickly.”

“Most people perceive it as dry,” said Hickert, “but it was way more useful than I definitely ever anticipated.”

Martinez admitted that she was “really terrified but I knew that I needed it before graduating. There was no way that I would leave BC without putting myself in a situation where I’d learn how to properly draft a research paper. I was scared but the growth you see is impressive.”

Krause noted that despite their mutual trepidation, the three students’ respective 30-page final papers were considered graduate-level work, and addressed fascinating questions such as the variation in the repression of nonviolent protests by China and other one-party states; the efficacy of gender quotas in promoting lasting female empowerment; and the impact of shifting U.S. gun laws on violence in Mexican border cities.

Undergraduate Research Fellows Harper Barbaree ’21 and John Gehman ’21 serve as the podcast’s main producers, supported by a number of other undergraduates from Krause’s research team.

Listen to the podcast here.

Stories from the Field