Female genius at the dawn of the Constitution

Boston College Law Founders Professor of Law Mary Sarah Bilder’s new book, Female Genius: Eliza Harriot and George Washington at the Dawn of the Constitution, implodes the assumption that America’s framing was exclusively attributable to white men—as history would supposedly have us believe.

Instead of the oft-cited Founding Fathers, Bilder presents a heretofore overlooked and underappreciated figure in the birth of America: the enigmatic and pathbreaking educator Eliza Harriot, purportedly the first woman to give public lectures in the United States.  Female Genius reconstructs Harriot’s transatlantic life with her Irish Catholic husband, paying particular attention to her pioneering orations, her belief in education as a political right, and to the academies she founded that inspired countless young American women to aspire to a college education, and a role in the political forum. 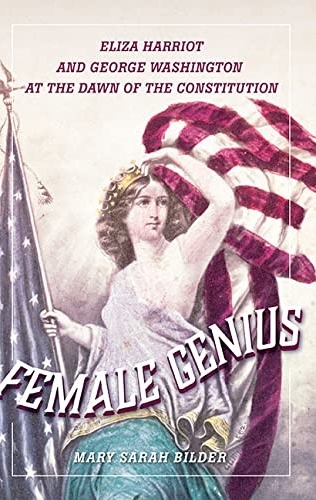 “The more we can learn about this generation—and not just the men inside that room in Philadelphia, but all the people who really participated in the country’s framing moment—the better that we understand the legacy of this period,” said Bilder.  “We can see that initial drafts of the Constitution had gendered references, but the final drafting committee removed every one, creating a gender-neutral Constitution, perhaps the result of the example and influence of a virtually unknown woman: Eliza Harriot Barons O’Connor.”

Bilder recalled that while researching her previous book, Madison’s Hand: Revising the Constitutional Convention, she repeatedly read George Washington’s diary, and was intrigued by the future president’s mysterious reference to his pre-convention attendance at an extremely rare, female-led lecture by the Lisbon-born and British-bred Harriot, who clearly “did not fit into the story of the convention.”

Harriot’s discourse in the summer of 1787, explains Bilder, was focused on an ambitious vision to alter the existing intellectual tradition that constrained female capacity, a radical idea promoted in England by a near-contemporary, Mary Wollstonecraft, a writer, philosopher, and women’s rights activist.  Wollstonecraft argued that women are not naturally inferior to men but had always been subjugated, and she advocated for women to be taught to think and speak in public as a path towards female participation in government. Likewise, Harriot claimed that all women possessed equal capacity—also known as “female genius”—and deserved an equivalent education and political representation.

Bilder found the perfect exemplar of female genius in Harriot, whose focus was on establishing and demonstrating that female capacity—women’s inherent aptitude and competence—was at minimum equal to men.  More than that, she insisted that the efforts of one individual female should serve as an example to be imitated and improved upon to encourage others to push beyond existing limits.

[Harriot called herself “Eliza Harriot,” Bilder explained, since “it’s the only part of her name that she could control herself,” so that reference is used throughout the book.]

Harriot’s narrative, Bilder added, reminds us of the struggles faced by women and people of color as subsequent revisions to the Constitution simultaneously provided the political and legal tools for exclusion based on gender and race, and how gender and race are intertwined. When Harriot moved to South Carolina, for example, the realities of white privilege interceded, as her tuition-based academies achieved their most resounding success—likely due to her ability to flourish in an economy dependent on enslaved labor.

The book concludes with a Black woman, Charlotte Rollin, who heeds the call to advance women’s status by improving on Harriot’s example. Born in South Carolina nearly a century after Harriot, Rollin accepted the state legislature’s invitation for a “lady” to argue for female suffrage. Her 1869 speech demanded that women, and in particular Black women, exercise the same right to vote and hold political office as men. She claimed it for “human beings” who were “entitled to human rights.”

“The book is a biography, and it’s also a history of how women and gender related to the Constitution,” said Bilder. “Eliza Harriot was born in 1749, and dies in 1811; her lifespan almost perfectly maps onto this space of expanding ideas about political representation, and then the abrupt constriction and exclusion that happens in the 19th century.  I argue that she’s a significant player—despite the dearth of knowledge about her—in creating this story in the United States.”