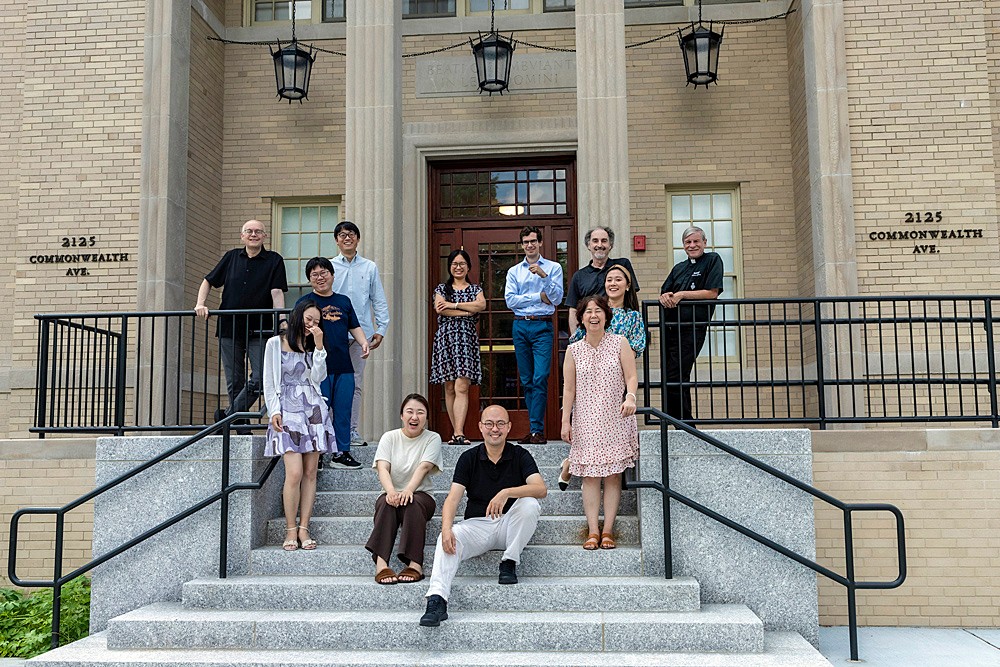 The Ricci Institute for Chinese-Western Cultural History welcomed its latest cohort of doctoral and post-doctoral fellows this summer—the first to come to the internationally renowned research center for the study of Chinese-Western cultural exchange since its move earlier this year to Boston College from its original home at the University of San Francisco.

Eleven Ricci Fellows, representing Italy, Spain, China, and Korea, among other countries, spent the summer working at the institute’s headquarters at 2125 Commonwealth Avenue on the Brighton Campus. The scholars—who stayed together in University housing—made use of the institute’s vast holdings, including rare books, manuscripts, and unique artwork from East Asia, to conduct research on subjects including music in Christianity, Chinese-Christian art history, and early Chinese translations of Biblical texts.

Doctoral fellow Xiangyu Liu also presented a public recital at the institute, performing traditional and modern music compositions from China, Japan, and the United States on the pipa or Chinese lute.

While the institute, which opened in 1984, has hosted doctoral and post-doctoral students throughout its history, the eight-year-old Fellows program is a key component of the Ricci mission, according to Director and Provost’s Fellow M. Antoni J. Ucerler, S.J.

“The institute is committed to bringing young and senior researchers together in friendship and respect,” he said. “We are helping them to create a network of fellow scholars and friends; there is nothing greater than that in Jesuit scholarship.”

“Ricci Fellowships allow these young people to deepen their research and knowledge, and often find new perspectives: Some have told us that the experience changed the whole direction of their scholarship.”

But the personal dimension of the Fellows program is not to be overlooked, he added: “It’s heartwarming to see the fellows become a community. They sit together in silence in the reading room for several hours a day working on their research, then socialize and enjoy one another’s company.”

Post-doctoral fellow Manuel Parada, an assistant professor of art history at the Complutense University of Madrid with an interest in Chinese-Christian art objects, agreed that the program represents an opportunity for growth and enrichment on many levels.

“Ricci offers rare materials I can’t find elsewhere,” he said, pointing to a small cross representative of Chinese Christian cloisonné, an ancient technique for decorating metalwork objects with colored material. “It’s also difficult to find a lot of Chinese researchers in this area of art history, so the fact that they are in the Ricci Fellows program is very helpful to me.

“We collaborate 24 hours a day, researching together, organizing seminars together, cooking together, relaxing together. It’s not just a fellowship, it’s a family relationship: Some of the former fellows come to visit, and they help us to make connections and discuss our research with us.”

Fr. Ucerler said the Ricci Fellows program’s philosophy echoes “one of China’s long, great traditions: Friendship through learning”—a maxim that is all too relevant in an era of geopolitical tensions, in East Asia and elsewhere.

“What we see today is all the politics raging above our heads,” he said, “while on the ground, we have these young people being nurtured at a Jesuit university. They are the future of East-West dialogue.”

For more on the Ricci Institute for Chinese-Western Cultural History, visti bc.edu/ricci.