Far away, so close

Students of Assistant Professor of Political Science Lauren Honig spoke with a group of residents from Amman, Jordan, in the Global Engagement Portal. Photos by Lee Pellegrini.

For several weeks this fall, Boston College students and faculty have held extraordinary conversations about everyday things, from video games to the cost of living to the value of education, with people in faraway places like Mexico City, Nairobi, Amman (Jordan), and Herat (Afghanistan)—all without leaving campus.

These discussions have taken place via the Global Engagement Portal, a shipping container converted into a videoconferencing chamber located outside O’Neill Library from late September through mid-November. The portal is one of several dozen designed by Shared Studios and made available around the world as a means to help people learn more about one another.

Carroll School of Management senior Kelsey Kosten and two fellow members of BC’s student-run conservation club EcoPledge chatted with Eloi and Elie, two young men from Kigali, Rwanda, who share their interest in environmental issues. The students listened to them describe Kigali’s recycling programs and the trash clean-ups held on Rwanda’s monthly mandatory day of community service, and compared their educational experiences. The five agreed that participating in ecologically-related activities has made them conscious of their own habits as consumers.

“It felt like we were sharing one space,” said Kosten, “instead of being 7,000 miles away from each other.” 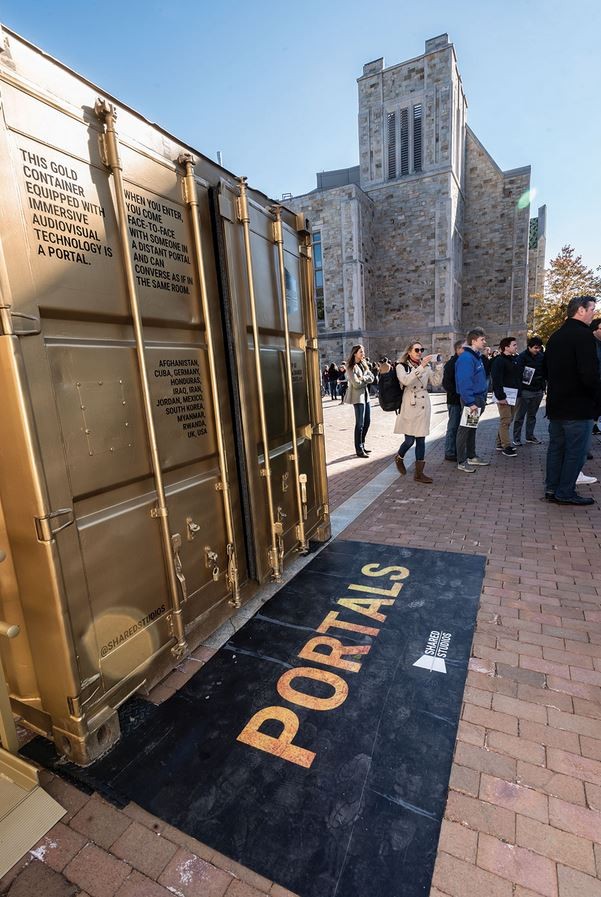 It’s the second time in as many years BC has hosted a portal. As part of last fall’s International Education Week, the Boisi Center for Religion and American Public Life organized a series of discussions between members of the University community and Iraqi, Kurdish, and Syrian refugees and displaced persons. This year, the International Studies Program—aided by an Academic Technology Innovation Grant from the University—expanded the length of the portal’s stay as well as broadening the project’s scope. The 2018 theme of global citizenship is a particularly relevant topic, organizers say, especially for a university seeking to increase its international presence and impact.

“The portal was an effective way to make the refugee crisis more meaningful to our community,” said Associate Professor of the Practice of Theology Erik Owens, director of International Studies, who organized the portal project this year and last, when he was associate director at the Boisi Center. “So the idea was to build on that kind of engagement in the context of global citizenship. Intellectually, we know people from other countries and societies share common ideas, hopes, and dreams, but there is still a tendency to see them as ‘others.’ With the portal, we can explore, and better understand, the connections we have to one another.”

Natana DeLong-Bas, an associate professor of the practice in theology and an Islamic Civilization and Societies Program faculty member, observed that her students’ eyes, and minds, were opened considerably in the session with Herat residents. They spoke with a young doctor about dating and marriage, and the difficult choice he and his wife faced: staying in Herat, where they can afford to live in a home with multiple bedrooms, or moving to London, where a one-bedroom apartment costs many more times his approximately $700-a-month salary. Other students got into a lively chat with a group of 14-year-old boys about video games, music, and movies. The boys also expressed pride in a group of female Afghan students who had won second place in an international robotics competition.

While there were questions as to how representative the Afghans on the portal were of their country—no women participated in any of the sessions—the experience was still a valuable one, said DeLong-Bas. “The most striking part of these conversations from the students’ perspective was how normal they were. They were not talking to terrorists or dirt-poor people in rags sobbing about violence and poverty as we see in the news. They were talking to normal, everyday people with hopes and dreams of one day coming to America. Whatever the current politics in this country, the American dream and the vision of America from abroad remain intact. My students saw first-hand the ability of people in Afghanistan to separate the American people from American politics—and now believe in the importance of doing the same when encountering people from other countries.” 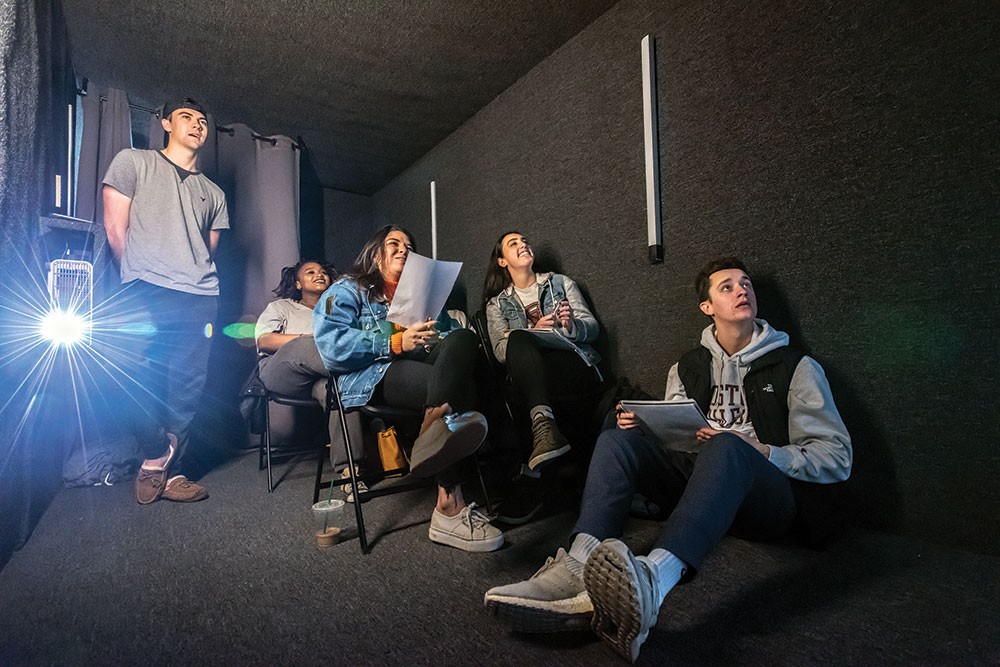 From left to right, BC undergraduates Marcus Backhorst, Kyra Horton, Kaylie Ramirez, Megan Richards, and Bryan Scordino inside the portal.

That many U.S. citizens’ impressions of Afghanistan are faulty or at best incomplete became obvious to Eilidh Currie ’20, a student in Assistant Professor of Political Science Lauren Honig’s Comparative Politics of Development course, during her portal session with Herat residents. “They asked us, ‘What do you know about Afghanistan?’ and we realized that the only things we know are related to our military involvement there.”

Currie and other students split up into small groups for their sessions with Nairobi, Kigali, Herat, Amman, and San Pedro Sula, Honduras, which were guided discussions: The BC undergraduates asked their portal partners to define the word “development” as it applied to their respective countries, and to identify the economic, political, and social issues of most importance in everyday life.

There were recurring themes throughout the student groups’ presentations in class last week on their portal discussions. Political corruption was an often-voiced concern (a Nairobi participant called it “the root virus that is killing us”), as was the quality of education (which may be relatively “dirt cheap” in Honduras, reported one San Pedro Sula resident, but still costly, especially if you add the cost of food). Investment in infrastructure and health care, especially for the poor and in rural areas, were among the big needs. While doubts were expressed about government’s ability—or willingness—to serve its people, the Kigali portal visitors noted that Rwanda had made strides to promote greater transparency and accountability in its institutions.

The Amman contingent, meanwhile, told the BC students that a country’s progress cannot be measured simply by numbers, such as the employment rate or per capita income: “Development must be qualitative, not quantitative.”

Another illuminating conversation took place when Associate Professor of the Practice of History Karen Miller and her students spoke with a Nairobi student. “My students asked about identity-formation and distinctions in a country where most of the population are African-descended people. She talked about their national identity as Kenyans but also about the various ways that historical and cultural identities impact employment, politics, and even social taboos.  In other words, there were some aspects of cultural differences that played out in the way that race has in the U.S.”

Because BC itself increasingly reflects a diverse world, the Global Engagement Portal offered other kinds of unexpected revelations: As Honig’s student Kyra Horton ’19, from Peachtree City, Ga., listened to Amman residents lament the impact of impact of tribalism on life in Jordan, she recalled her father describing similar conditions in his native Nigeria.

“It really resonated for me,” she said. “Different countries, same problem.”