The pandemic prevented international travel for Boston College students this academic year, but the University’s Global Conversations program served as their personal, interactive bridge to undergraduates worldwide, and the vitally important issues and concerns they share.

Launched last fall, the student-driven initiative connects small groups of four to eight BC students via videoconference with a similar number of peers at universities around the world for hour-long conversations about relevant and critically important topics under six overarching themes:  the COVID-19 pandemic; racial justice and decolonization; protests and social change; environmental justice; globalization and global cultures; and migrants and refugees.

“You don’t have to be the most knowledgeable person or the most socially active person; you just come in willing to listen to how other people have experienced the world and share your own knowledge,” said Tonie Chase ’21, the protests and social change theme leader. “It’s a really casual and chill space to talk about the issues that really matter.”

“I’m really proud of our student leaders, who have invested so much time and energy in this project to make it successful this year,” said International Studies Program Director Erik Owens, an associate professor of the practice in theology who serves as the Global Conversations faculty leader. “They have hosted nearly 40 of these informal conversations with peers in Asia, South America, Africa, the Middle East, and Europe, most in English but some in Spanish, Mandarin, and French as well.

“We’ve worked hard to institutionalize the project in ways that will help it become a permanent, student-led program at BC. We’re grateful for the support of so many faculty, deans, and students, and particularly BC’s Office of Global Engagement.” 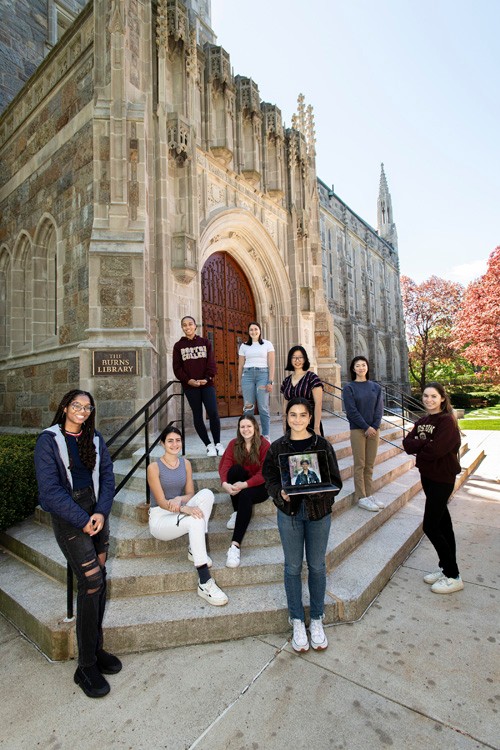 "You don’t have to be the most knowledgeable person or the most socially active person; you just come in willing to listen to how other people have experienced the world and share your own knowledge.”

To join a conversation, an individual or a small group simply clicks on a link at the Global Conversations website, picks the topic desired, and a BC conversation leader then coordinates the videoconference with the BC participants and the students at the foreign university.

In early March, Emi Tsukada ’23 led a discussion on the impact of the pandemic with students from the Health Awareness Club at St. Joseph University in Beirut. “We shared how we are adapting to online learning and talked about this new way of life. We also shared the small joys we try to find in everyday life, such as waking up early to see the sunrise. We all talked about places we would love to travel to and I was definitely convinced by the USJ students to put Beirut at the top of my list.”

Soon after, BC participants and students from Pontificia Universidad Católica de Chile in Santiago, led by Wenwei (Mary) Su ’22, the migrants and refugees theme leader, discussed the similarities and differences between the current migration conditions at the United States southern border and the northern Chilean boundary, including the grave challenges and human rights violations that refugees face in both regions.

Subsequent BC-PUC sessions—led by Jack Engelmann ’22 and Laura Bianchi ’23, respectively—touched on the rise of the extreme right and its impact on immigration policies in both countries, and the effects and implications of the exchange of art between global cultures, ranging from literature and poetry to paintings and sculptures. A discussion on the ethics of humanitarian aid guided by Diksha Thach ’21 was planned to take place before the semester ends.

“Something that I think is a pretty common sentiment among the project’s conversation leaders is just how exceptional the conversations have really proven to be in providing a sense of connection,” said Bianchi, the globalization and global cultures theme leader. “There were five of us—from Spain, Ecuador, and Vietnam—and we shared very personal accounts of how art influenced our lives and what it meant to us.  It truly felt that I had gained four new friends from across the globe.”

Another session with students from the University of Insubria in Italy concerned race, police brutality, and microaggressions, led by Brianna Stonick ’21, who plans to host another on the legacies of colonization and Black identity formation with Groupe Scolaire les Lauréats in the west African country of Burkina Faso.

“At first I was intimidated, but it’s been a really unique learning and leadership opportunity,” said Stonick, the racial justice and decolonization theme leader.  “I’m not sure why it took me and the whole world until now—until COVID—to realize that the technology we’ve been using for years can actually connect us, from our couches and desks, to people all across the globe.”

Other conversations in the works include topics ranging from anti-Asian discrimination with a group of Beijing students, three environmental justice-focused dialogues with undergraduates from Milan’s Universita Cattolica del Sacro Cuore, and a return visit with students from Beirut’s USJ to share immigrant experiences.