Skip to main navigation Skip to main content
BC News > Nation, World & Society > International > Behind the protests in Iran

Behind the protests in Iran

A Q&A with Theology Associate Professor of the Practice Natana DeLong-Bas, past president of the American Council for the Study of Islamic Societies

Protests have rocked Iran since the September 16 death of 22-year-old Mahsa Amini while in police custody, three days after she was arrested by the morality police in Tehran for allegedly violating the Islamic Republic’s strict dress code for women. There were reports that officers battered the Kurdish woman with a baton; the police claimed she suffered a heart attack.

More than 200 protestors have reportedly been killed by security forces during the fierce government crackdown, and hundreds of women and girls—often removing and burning their hijabs in defiance of the authorities—have been arrested. The protests have continued across Iran despite efforts to detain not just the protestors but also men and teenage boys, and Iranian public figures, who have expressed their support; meanwhile, rallies in the United States and Europe have proclaimed international solidarity with the demonstrators, who frequently chant “women, life, freedom,” and “death to the dictator” (Ayatollah Ali Khamenei).

Natana DeLong-Bas, an associate professor of the practice in the Theology Department, speaks with University Communications Associate Director Phil Gloudemans about the current Iranian protest movement and the context for the government’s repression. The past president of the American Council for the Study of Islamic Societies, she is an expert on Islam and Christianity, comparative scripture, women and gender, Islamic law, the environment, extremism, and Arabian Gulf countries. 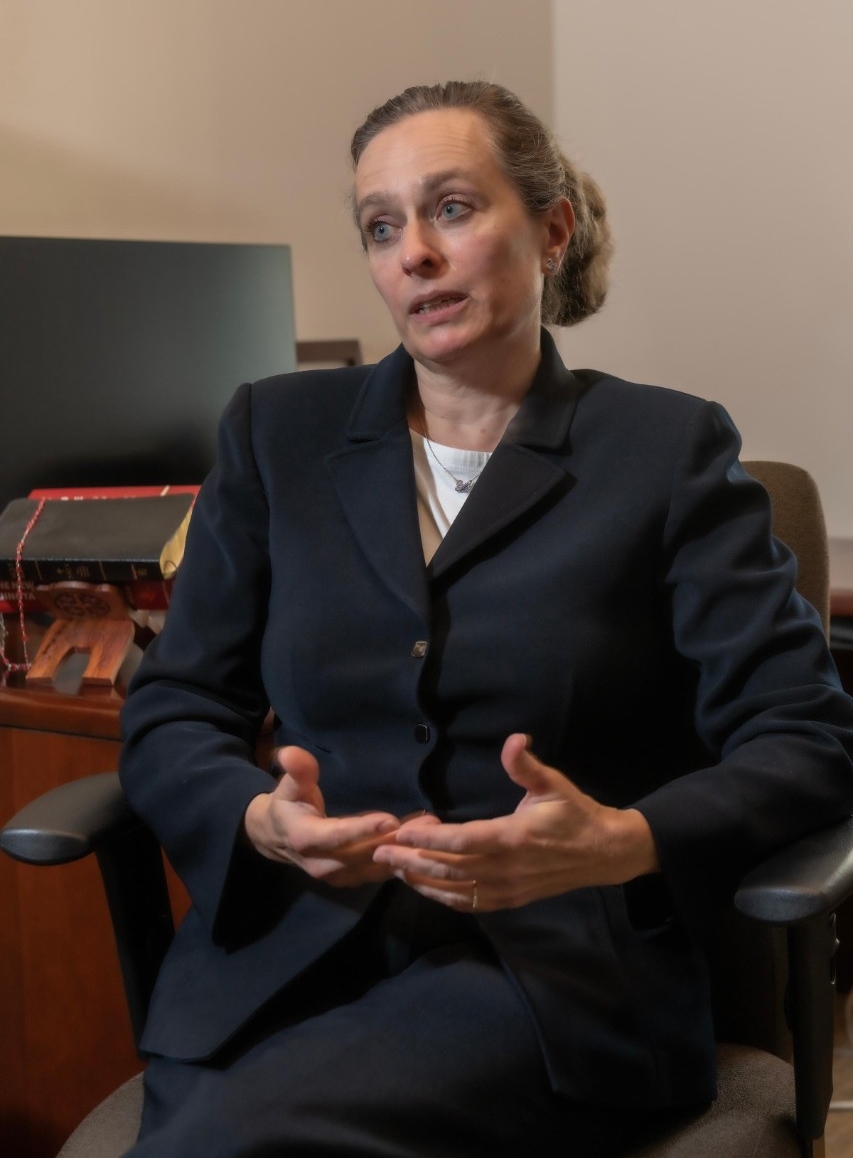 Iran has had a number of significant uprisings, including the revolution that brought the Islamic Republic into power in 1979; the 2009 Green Movement to protest massive fraud in presidential elections; the 2019 uprising over rising gasoline prices, and now the protests that erupted since the death of Mahsa Amini. What is new or different about today’s demonstrations compared to the past?

First, there are no clerics involved and the protests are neither religious nor anti-religious in nature. Religion has been carefully, and I think intentionally, excluded, even though the issue that sparked the current demonstrations—an assault on a woman for “improper” veiling—is understood to be a reflection of the state’s religious commitment. The protests are focused on “Women, Life, Freedom,” all of which are interconnected in protesting a totalitarian regime. A major aspect of these protests has been the centrality and visibility of women—as victims and as voices—claiming the right to personal autonomy. Finally, unlike the past, today’s ongoing protests, from demonstrations to sit-ins, are leaderless and seem to be organic and spontaneous, yet far-reaching in impact, visibility and resonance.

The majority of the protesters seem to be under the age of 25. Iranian sources indicate that the average age is 15, and the women who have died at the regime’s hands range from ages 16 to 22. Other than their youth, what defines these protestors?

What is so poignant about these protests is the fact that so many of the victims—those killed, arrested, and detained—are so very young. Protest images frequently highlight young girls and young women, apparently of high school and university age, stripping off and setting fire to their veils, and cutting their hair, as demonstrations of their claims to personal autonomy. Children as young as 10 are seen carrying posters and placards, demonstrating their support for the protesters. These young people literally represent the country’s future, and they are taking charge of their destiny even though they are too young to have government representation.

In a country where culture is largely rooted in obedience to age and power, and submission of individual to collective identity, the fact that so many young people are banding together as an alternative collectivity sends a strong message about the refusal to abide by rulings they have had no voice in legislating. Rather than accepting powerlessness in favor of the powerful, these youth are finding ways to make their voices heard. The question that remains is not just whether anyone is listening, but whether any alternative outlets for fulfilling youth demands and the desire for a stake in determining Iran’s future will be offered outside of joining with existing powers in policing and denouncing others.

How would you characterize the chances that today’s protest movement will result in some significant, long-lasting changes to the Iranian government’s rule?

The issue of a “proper” hajib has proven to be the match that’s lit the ticking time bomb of a population frustrated with a regime that not only fails to meet people’s expectations, but is also mired in a mindset that doesn’t resonate with large portions of the citizenry dissatisfied with the unnecessary restrictions on their personal autonomy and life choices—everything from clothing and personal appearance to the freedom to attend soccer matches. Those who protest are not necessarily demanding the overthrow of the government; instead, they are insisting that the regime hear their voices and grievances. If there is a turning point, it will be if and when the state’s arms of violence—the police, military, and courts—question their orders, which is already transpiring among some members of the Basiji (morality police) since Mahsa Amini’s death, who have expressed distress with directives to fulfill arrest quotas for “improperly” dressed young people or who appear in “morally questionable” ways in public places. If the state’s enforcement mechanisms refuse to carry out draconian measures, particularly against Iranian youth, it could spark real change.

Even as Iran has restricted and slowed Internet access to blunt dissent, alternative forms of civil disobedience have emerged. President Ebrahim Raisi, an ultraconservative cleric who insists on hajib rule enforcement, has accused the protestors of misusing Amini’s death to destabilize the country.  What do you think of his claim, and do you anticipate any short- or long-term changes by Raisi to quell the unrest?

Blaming social media and youthful impulsivity for creating social unrest, rather than scrutinizing long-standing and widespread frustration with repression, and the limited freedom of expression, has been the regime’s standard tactic to deny the legitimacy of popular demands. Accusations of destabilization tend to lead to criminal charges of treason, sedition, and even terrorism, resulting in more draconian regime responses, as we are seeing now with sham trials that conclude with death sentences.

None of that is helpful in terms of addressing the issues that have led to so much unrest. Use of civil disobedience is nothing new in Iran; Iranians have long proven to be creative in expression of grievances, frustrations, and pointing to the absurdities of daily life restrictions in nonviolent ways. But peaceful protests only last so long when no tangible results are produced. While nothing is inevitable because human choice is always involved in decision-making, the lack of positive government response increases the likelihood of turns to violence, and responding to it with more hostility. No one wins in that scenario.

The Biden administration has condemned Iran’s brutality and subjugation of its citizens, and imposed sanctions.  Will those measures decrease or end the violence?  If not, are there any external forces that could sufficiently influence the Iranian government to ease the conservative Islamic dress and behavior rules that have governed daily life for Iranians since the 1979 revolution?

Regime brutality against protesters is increasing over time and is a serious concern, particularly because many of those who have been killed and violently arrested and detained are children—a show of control by a regime desperate to hold onto its power through repression and hostility against its own people. The regime clearly expects its iron-fist rule to stir fear and quell the protests, but the government is missing the protesters’ points: Their desire for personal freedoms and autonomy is greater than their fear of the regime; that there is power in numbers; and that they will continue to express their defiance.

I don’t see the violence or the protests coming to an end without some form of resolution, and that solution needs to come from within Iran on the basis of what the Iranian people want for themselves. The most important support external powers can provide is to back the Iranian people by assuring that any measures undertaken to apply pressure to the Iranian government do not have a negative impact on the general population, which is already under tremendous economic stress.

Clashes between Iranian security forces and protesters were reported in Saqqez, Amini’s home city, after crowds gathered near her grave on October 26 to mark the 40-day mourning period observed under Islamic tradition since her death.  Will this religious milestone end the protests? If not, what can be expected to follow?

A number of analysts have noted that this 40-day marker could have brought an end to mourning specific to Amini, but the clashes that resulted made it clear that the government persists in repressing any expression of human emotion, thereby ruling out any possibility of an end to the protests. The reality is that many people have been killed during these demonstrations, and the 40-day mourning clock starts anew with each death. If the government wants an end to protests of regime killings, the regime needs to stop killing people. Any government that demonstrates ongoing willingness to arrest, detain, and kill its own children and youth cannot reasonably expect the population to be obedient to it. The moral conscience of any human being demands respect for the life and dignity of children.