The Clough Colloquium at Boston College will host a conversation with former U.S. National Security Advisor and United Nations Representative Susan E. Rice, an important figure in American foreign policy of the 1990s and 21st century, on Oct. 2 at 4 p.m. in the Corcoran Commons Heights Room. The event is sponsored by the University's Winston Center for Leadership and Ethics. 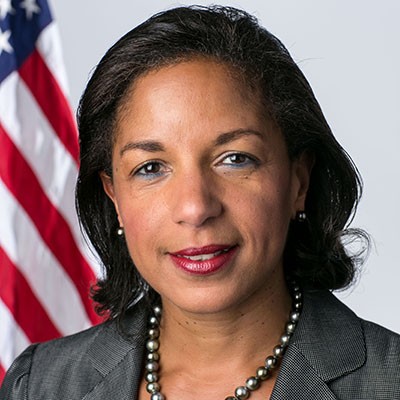 Rice served under President Barack Obama as U.S. ambassador to the United Nations from 2009-13, the first African American woman to hold that position. She worked on global issues of security, human rights, and prosperity while striving to build an effective basis of cooperation amid dramatically shifting international developments, such as the Libyan civil war.

During Obama’s second term, Rice took on the role as national security advisor, leading the National Security Council staff of approximately 400 defense, diplomatic, intelligence, and development experts. She provided the president with daily national security briefings and coordinated the formulation and implementation of the Obama administration’s foreign and national security policy. Among many issues she addressed as advisor, Rice cited growing concerns over Chinese cyberattacks in a 2015 speech, calling these “a critical factor in determining the future trajectory of U.S.-China ties.”

Rice also served in the Clinton administration as a member of the National Security Council, director for international organizations and peacekeeping, and special assistant to the president and senior director for African affairs.

No registration is required to attend the colloquium. Doors open at 3:30 p.m., and seating is based on a first come-first serve basis. For more information, contact the Winston Center at winston.center@bc.edu or ext. 2-9296.