Skip to main navigation Skip to main content
BC News > Humanities > History > "As a historian, I want to hear it all"

"As a historian, I want to hear it all"

As someone whose scholarly writings have explored the impact and legacy of the presidencies of Abraham Lincoln, Theodore Roosevelt, and Dwight Eisenhower, among others, Professor of History Heather Cox Richardson had the opportunity of a lifetime when the White House invited her to interview President Joe Biden. Richardson, who has gained a national following in large part through her online newsletter, “Letters from an American” sat down with the president on February 25 to talk about American democracy and its struggles.

Richardson spoke with the Boston College Chronicle about her experience as the presidential interviewer. 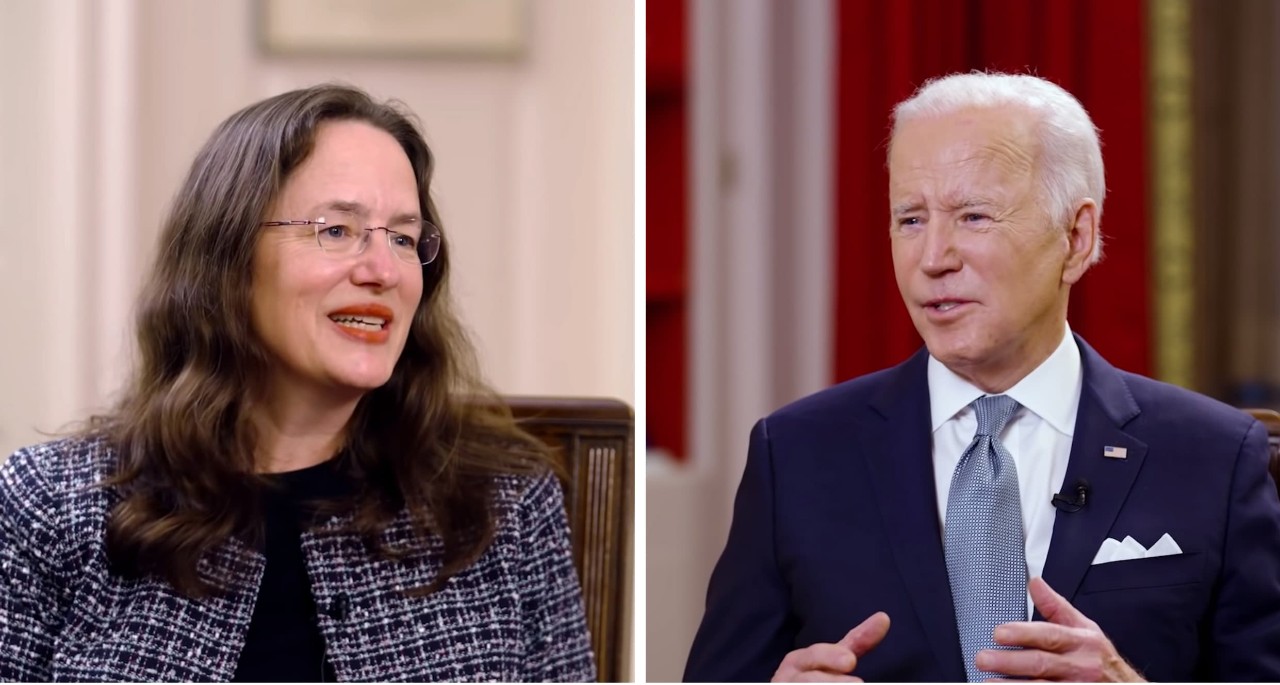 Up until that day in the White House, who would you say was the most famous person you had interviewed?

Hmmm. I don’t do a lot of interviews, but I do work with some impressive people. Just a few days before the interview with the president, I got to be part of a discussion with Russia specialist Fiona Hill, which was amazing. As far as interviews go, though, the ones I really remember from the podcasts I’ve done are the people—generally scholars—who are all stiff at first, and then as they warm up drop some truly brilliant observations. I have gotten in the habit of asking at the end of any recorded interview of which I’m in charge: “Is there anything else you’d like to add?” People usually say, “No, not really,” and then they often say, “except...” and they launch into an incredible revelation.


Had you ever had any previous interaction with Joe Biden, even in passing? Did you have a sense—maybe from other people—of what he would be like to interview?

No. I had never crossed his path in any way. And I didn’t really have a sense of how he might interview. I did go into it thinking that he might not be as warm and forthcoming as many have said, so I was prepared to work much harder than I did. That was wrong; he was lovely. And honestly, anyone who has run class discussions for 30 years has a pretty good sense of how to shape a conversation, so needing advice on directing him never even occurred to me. So long as you do your homework on a topic, you’re generally pretty good to go in a discussion of it.


Where exactly did the interview take place, and in real time, how long were you there for?

We recorded the interview in the China Room, which was wonderful for a historian. It is a warm room, red to match the dress in the portrait of Grace Coolidge on the wall, if I recall correctly. The wall opposite the fireplace is lined with cabinets displaying the plates for the former presidents’ china sets, and they are remarkably reflective of some of the president’s wives. Mrs. Johnson’s plates, for example, have wildflowers on them, and she is famous for—among other things—supporting public engagement with Texas’s many native wildflowers.

We were together in the room for about 40 minutes. Set-up time was much longer, of course.

Did any of his answers or comments surprise you?

Well, yes, but that’s likely a reflection of my own current research obsession. I really wanted to hear him talk about the theory of representation in government, which is central to a project I’m working on, and he didn’t seem terribly interested in that. It struck me later that to people not as far down that rabbit hole as I am, the answer to it seems pretty obvious. Other than that, I didn’t really have any expectations of what he might say.

That’s the fun of interviewing. What you really want is someone who is willing to engage, and he was. It’s a nightmare when people essentially give “Yes” or “No” answers, and you have nothing to work with. Aside from being boring, that just feels hostile when you listen to it.


If you had had more time, what other things would you have liked to explore with him?

This is a great question, because I suspect I come at today’s politics from a different perspective than a journalist. First of all, because of what I do with “Letters from an American,” I am extremely well versed in any information coming from the White House that is public knowledge. So there is zero point in me asking anything that I can find elsewhere—there is a lot publicly available if you know where to look. And there is no way lawmakers are going to hand over information that is not public knowledge to someone like me.

So, what I want to get from someone like President Biden is how they think about what they are doing. I study the larger trends of American history, and how people think is absolutely crucial to them. You don’t have to agree with those positions, but you definitely need to know what they are and why lawmakers think what they are doing is important.

That sort of public conversation was central to American politics until the late 1960s, and I would like for us to get it back.

Anyway, if I really could interview the president at length, it would be about his role in history, and the things he has seen and participated in over his long career. He took over the chair of the Senate Judiciary Committee after segregationist South Carolina Senator Strom Thurmond, for example, who opposed using the federal government to protect civil rights. What was that like? How has the judiciary changed?

And Biden has also been profoundly involved in foreign affairs throughout his time in office, a deep engagement that I think is behind his administration’s strengthening of NATO and support for the extraordinary coordination of opposition to Russian president Vladimir Putin’s recent attack on neighboring Ukraine. How has our engagement in foreign affairs changed since the 1970s? What were the key moments from the perspective of an insider? Who were the key players?

I mean, I could go on for hours. He has been a witness to history, and as a historian, I want to hear it all.