Pope Francis’s vision for the Church

A conversation about the pope’s goals for the future 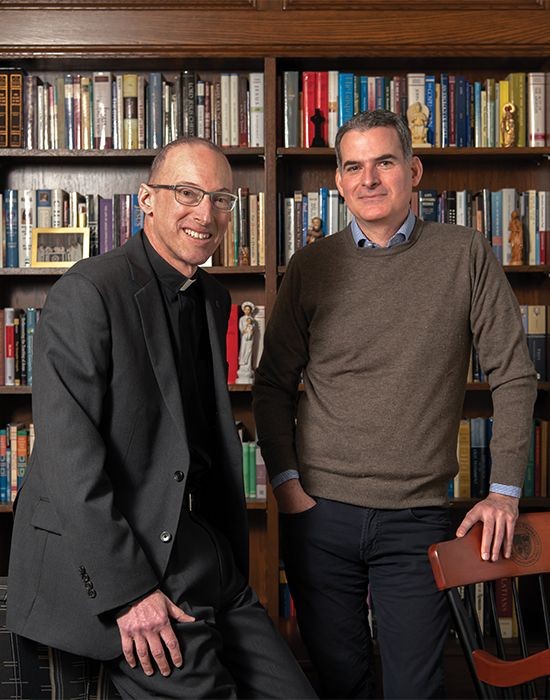 An apostolic exhortation written by Pope Francis made international headlines in February, but not of the sort that many Francis supporters were expecting. Last fall, a proposal that would have authorized certain married men to become priests was endorsed at the closely watched Synod of Bishops on the Pan-Amazon region. That led to speculation that the pope would approve the measure, but he instead rejected it in his apostolic exhortation. The decision came as a blow to some Francis supporters, who’d seen the proposal as a natural extension of the boundary-pushing synod out of which it grew. The assembly was organized with a focus on protecting the Amazon, one of the world’s most ecologically vital—and endangered—areas, and on emphasizing economic and environmental justice. The synod’s working document was the result of a two-year process that included some 300 listening sessions involving nearly 90,000 people from all walks of life and cultures in the Amazon, a consultative process that distinguished the synod.  To discuss what these developments tell us about Francis’s priorities for the Church, I sat down with School of Theology and Ministry Dean Thomas D. Stegman, SJ, and Associate Professor of the Practice Rafael Luciani, a theological advisor to the Latin American Bishops Council (CELAM), and the first lay to be appointed as a member of the Theological Team of the Latin American Conference of Religious Women and Men (CLAR). Luciani was invited to participate at the synod.

Boston College Magazine: Many of the pope’s supporters have expressed disappointment with Francis’s decision on viri probati, or ordaining married men. Were you surprised by the apostolic exhortation?

Thomas D. Stegman, SJ: No, I was not surprised. The exhortation certainly reiterates the need for the local church (in this case, in the Amazon) to take a lead in determining pastoral needs and how to address them. The media attention given to the issue of viri probati—understandable as that is—was out of proportion to what the synod as a whole was about.

Rafael Luciani: This entire synodal process has to be read as a move toward a recovery of a localized ecclesiology. The most important thing is the door remains open for local Churches to “discern and make the pastoral decision” according to “what the code of canon law already establishes” in relation to this issue, from the request made by a local bishop. The code provides the procedure by which bishops can discern the needs of the communities and, based on those needs, inquire about the possibility of ordaining married men, as well as orienting the diaconate toward the communities’ sacramental needs.

BCM: Pope Francis has said that the Church should become more synodal in its workings. What does that mean?

TS: I think what the pope is saying is that it’s not just a matter of having synods as events. It’s about synodality as a way of being the Church—bringing people together to listen. Francis, who is a Jesuit, has shown a commitment to consulting broadly, to taking very seriously the presence of the Spirit in all elements of the Church. In short, we need to be listening, especially to people on the margins, people who don’t always get listened to.

BCM: Are the decisions in the apostolic exhortation consistent with the synodal approach?

TS: A careful reading of the exhortation makes clear that engaged listening is being taken seriously.

RL: Francis’s challenge to us is, not only are we listening, but who should we be listening to? Normally the synods are made from the consultation of the bishops and that’s all. In this one, Francis included indigenous people and lay people, including women lay and women religious. The church was always distant from these people, and now with Francis it’s moving forward by including people that were never imagined to participate in these processes. At the synod, you had at a table, working together, an indigenous person, a bishop, a lay woman, a lay man, a priest.

BCM: You’ve each spoken about the emphasis that Pope Francis puts on listening. How does that relate to his priorities for the Church?

TS: In both Greek, which is the language of the New Testament, and Latin, there’s a strong relationship between the words for “hearing” and “obeying.” In Greek, akouo¯ means “to hear,” and hypakouo¯ is “to obey.” In Latin, audire means “to hear,” and oboedire is “to obey.” In the context of synod, we’re talking about hearing and obeying God, and how the Spirit is leading us. Discernment is only possible when there’s a listening that is so profound that it’s not just hearing the words, it’s sifting through them to discern what is truth, to try to hear how God is leading us, and letting that word take root in us and transform who we are. There’s a humility that we’re called to—I could be surprised by who has something to teach me.

RL: During his first year as pope, Francis said in an interview that Pedro Arrupe [the late Spanish Basque Jesuit and former superior general of the Society of Jesus] influenced him and his life. In that interview, he also referred to cultures and “enculturation,” which was a word that Arrupe created. It didn’t exist in Spanish. Arrupe said, “To enculturate means to go into the life of the people, and you will be shocked because you have to start your own life from zero, re-creating all you have learned.” Another of the pope’s sources, the Aparecida—the concluding document of the fifth Conference of Latin American Bishops, and a guiding document for Francis’s magisterium—includes the word “missionary-disciple,” using a hyphen to make those two words just one. It’s a circularity. It’s to say, I’m not at one point a missionary and another point a disciple. I have to be always the missionary-disciple, disciple-missionary—listening, learning, changing. So I just love one thing that Francis repeats on almost every trip: “The same way we listen to God, our father, should be the same way we listen to the people, especially the poor.” That’s beautiful because it’s not that we listen first to God and then we listen to the people—by listening to the people, we are listening to God.

There will always be tension between where the Spirit is leading us and the force of long-established traditions.

BCM: The decision regarding married priests got most of the attention, but the issues of economic and environmental justice seem especially notable for the synod. Why are they important to the Church?

TS: It’s important to appreciate why the Amazon was chosen for the synod. The pope has named environmental degradation as the greatest crisis facing not only the Church, but everyone in the world today. He’s made the case that this issue is also tied to economic questions and justice issues. The poor are the ones who most suffer the consequences of what’s happening to the environment. Some of us in North America and Europe can feel threatened, because Francis is calling for real changes. He’s asking us to think through the implications of how we’re living, how our economy works, the cost it exacts on people in other parts of the world. That makes some folks uncomfortable.

BCM: Of course change is never easy. To what degree does that help to explain the pope’s decisions in the apostolic exhortation?

TS: There will always be a tension between, on the one hand, discerning where the Spirit is leading us into the future and, on the other hand, acknowledging the force of long-established traditions. There is a reason the Catholic Church has a strong sense of its identity, as two millennia of tradition has helped to establish and strengthen that identity. A challenge is being open to how the Spirit might be calling us in new times and circumstances, yet in continuity with who and what we have been. I think Pope Francis’s exhortation reflects that tension.

BCM: Which raises the question of just how much Pope Francis’s call to listen to all people, from all across the world, is truly shaping the future of the church. Are these changes in approach permanent, or might the popes who follow him reverse course?