Sister Nathalie Becquart, XMCJ, the first women to serve as under-secretary for the General Secretariat of the Synod, shares insights at Boston College

One of the most prominent and influential women in the Roman Catholic Church today, Sister Nathalie Becquart, XMCJ, will be the first woman with a right to vote at the upcoming Synod of Bishops, a summit of 250 bishops from around the world.

The French nun was studying at the Boston College School of Theology and Ministry when she was appointed last year by Pope Francis to serve as under-secretary for the General Secretariat of the Synod. She returned Boston College in October to provide an update on the groundwork being done as part of the Synod on Synodality, scheduled for October 2023 and recently extended to a second session in October 2024. Her talk, “Becoming a Synodal Church: Issues and Challenges,” was sponsored by STM’s Continuing Education program delivered in person and online.

The Synod on Synodality was formally opened by Pope Francis in 2021 with a call from the pontiff to all the baptized to journey together as pilgrims in a transformative process, led by the Holy Spirit, to build a synodal Church”—a listening Church where all can feel at home and participate and have co-responsibility.

Sr. Becquart compared the synodal process to the journey on the Road to Emmaus, a reference to a passage in the Gospel of Luke where the risen Jesus walks alongside his disciples. She said this synod marks the first time all the baptized have been asked by the Catholic Church what they think. 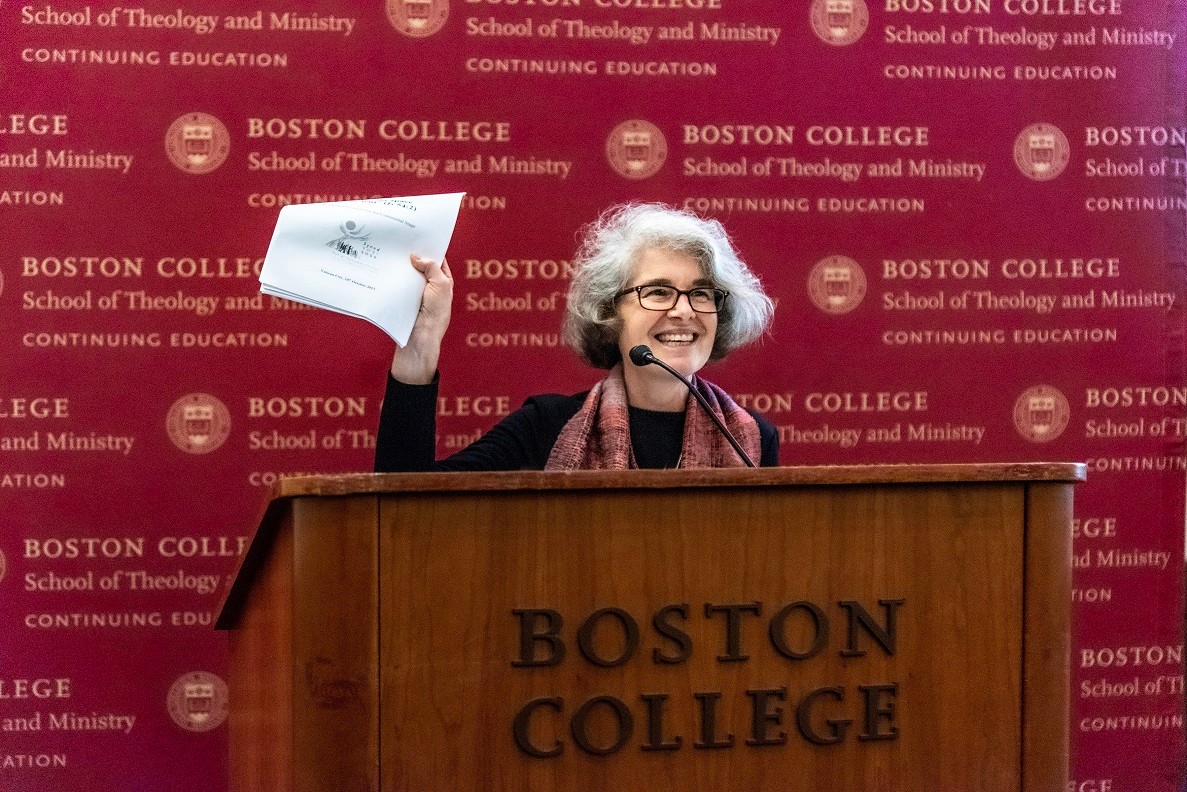 Sister Nathalie Becquart holds up a copy of the newly released synodal report, "Working Document for the Continental Stage," during her talk in the Heights Room. (Photo by Frank Curran)

Sr. Becquart’s talk coincided with the release that day of the “Working Document for the Continental Stage”—which synthesized all the local reports submitted from around the globe from the first stage, or listening phase, of the synodal process. The reports came from more than 100 episcopal conferences and Eastern Catholic churches, 17 dicasteries of the Roman curia, religious superiors, associations and lay movements as well as a thousand individuals or groups who contacted the secretariat directly.

Sr. Becquart was a member of the group of religious, clergy, and lay people tasked with creating the working document, which has been released in multiple languages and will guide the synodal process into the next phase. STM Associate Professor of the Practice Rafael Luciani, who serves on the Theological Commission of the General Secretariat of the Synod, was also part of this group.

The document, said Sr. Becquart, reflects what has been said all over the world, in all the local churches.

“Listening to all these voices of the People of God, what has been heard and what we have received is that we understand that the Holy Spirit is asking the Church to ‘enlarge the space of your tent,’ a reference to Isaiah 54:2,” said Sr. Becquart, adding there is a clear call for a “radical inclusion of all the diversity of the People of God, including those who already feel on the margins.”

In introducing Sr. Becquart, STM Dean Michael McCarthy, S.J., said her appointment as under-secretary is seen as a watershed moment in the Catholic Church and an indication of an increased role for women in the life of the Church.

“Very few women have as much say as Sister Becquart on shaping the future of the Church,” he added.

Sr. Becquart has had direct experience in previous synods, serving as a coordinator of the pre-synod, a speaker, and an observer of the 2018 Synod on Young People. In 2019, Pope Francis appointed Sr. Becquart a consultor to the General Secretariat for the Synod of Bishops, ahead of the Synod on the Amazon.

Sr. Becquart knew from her work on the Synod on Young People that young Catholics were interested in a synodal Church, but she said she realizes that the call for a synodal Church is not limited to young people.

“It's all kinds of members of the People of God who call on the Church to practice synodality as a way of being and acting, promoting the participation of all the baptized, of people of goodwill, each according to his age, state of life, and vocation,” said Sr. Becquart.

She acknowledged that though synodality is a call of God, “the journey is really not easy, because it's a process of change and transformation.”

She likened the role of those who are engaged in the synod to that of a midwife to “accompany the new birth of the Church, with labor pain, to get rid of the clerical Church and to become a synodal Church.”

Sr. Becquart shared that reading all the reports was a very deep, personal, spiritual experience for her. “Something of the presence of God is given to us through this process. And at the end, we had the experience that the synthesis, those pages, were like holy ground, and we were like Moses with the fire. This [working document] is coming from an experience of God, an experience of Church, and is supposed to be given back to help people to continue to walk close to this holy ground.”

One main topic that emerged from reports from around the world, said Sr. Becquart, was the question of women. The working document states: “A critical and urgent area …concerns the role of women and their vocation, rooted in our common baptismal dignity, to participate fully in the life of the Church. A growing awareness and sensitivity towards this issue is registered all over the world. From all continents comes an appeal for Catholic women to be valued first and foremost as baptized and equal members of the People of God.”

There was also a strong call, said Sr. Becquart, to foster ecumenism. For the Church to face the most important problems of our world—ecological climate change, violence, polarization—“we can’t do it alone, we have to do it with our brothers and sisters of other Christian faiths and other religions.”

One of the attendees at Sr. Becquart’s talk, Associate Professor of Theology Mary Ann Hinsdale, IHM, called her presentation “hopeful.”

Sister Nathalie Becquart’s presentation will be posted to the STM Encore website in the near future.