A statue of Saint Ignatius of Loyola in the historic St. Mary's Hall. Photos by Lee Pellegrini.

More than one hundred years after it was built, the historic St. Mary’s Hall—home to the Boston College Jesuit community—finally feels complete.

In November, six custom statues depicting Jesuit saints were installed in the main, first-floor hallway of the building, placed in elaborately carved wooden alcoves designed by architect Charles Donagh Maginnis in 1908. The six-foot-high niches, part of the building’s original construction, have remained empty for more than a century.

“The spaces were made for this,” said Fr. Cyril Opeil, S.J., who serves as the superior of the BC Jesuit community. “It was time for them to be filled.” 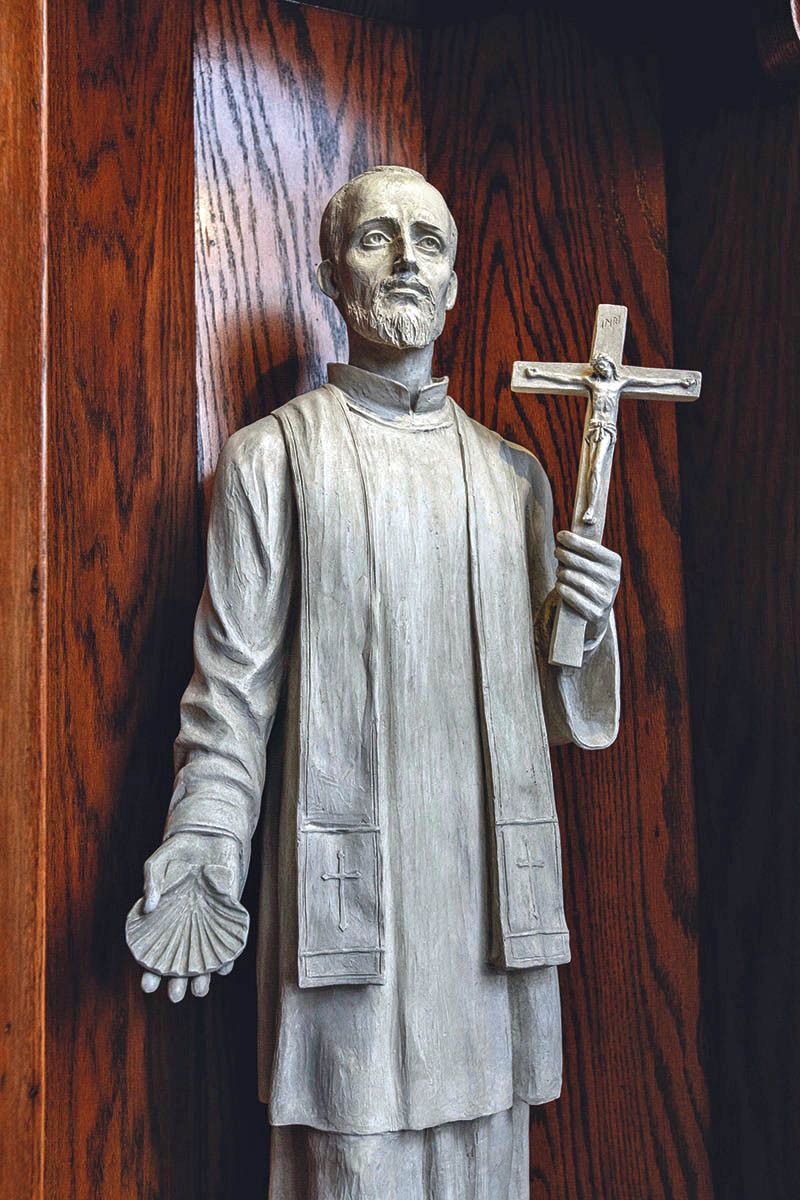 Saint Francis Xavier is portrayed with a crucifix and seashell, symbols of his missionary work around the world.

Spaced out along the entirety of the hall, the statues sit atop custom-milled pedestals adorned with brass nameplates. New LED spotlights illuminate the intricate details of each carving—from the soft folds of Saint Ignatius of Loyola’s cape to the pointed leaves of the palm frond held by Saint Paul Miki of Japan.

Plans for the statues have been loosely in the works for decades, but got serious during a major renovation of St. Mary’s in 2013, according to Senior Construction Manager Tom Runyon. Whenever administrators stopped by for updates on the project—which involved modernizing the Jesuit residences, converting the south wing for academic purposes, and restoring the building’s Gothic details—the empty niches would inevitably come up.

What followed was a years-long partnership between a group of BC Jesuits, Runyon, and renowned local sculptor Bob Shure, whose work includes the Boston Irish Famine Memorial in downtown Boston. The three parties exchanged feedback on sketches and clay models of each figure, meeting periodically at Shure’s studio in Woburn for critiques. Last fall, the final versions were cast in fiberglass resin and brought home to the Heights.

With St. Mary’s Hall reopened to visitors, Fr. Opeil hopes the public will stop by to enjoy the newly installed pieces, which represent diverse aspects of the Society of Jesus’ work, as well as different time periods and locations. 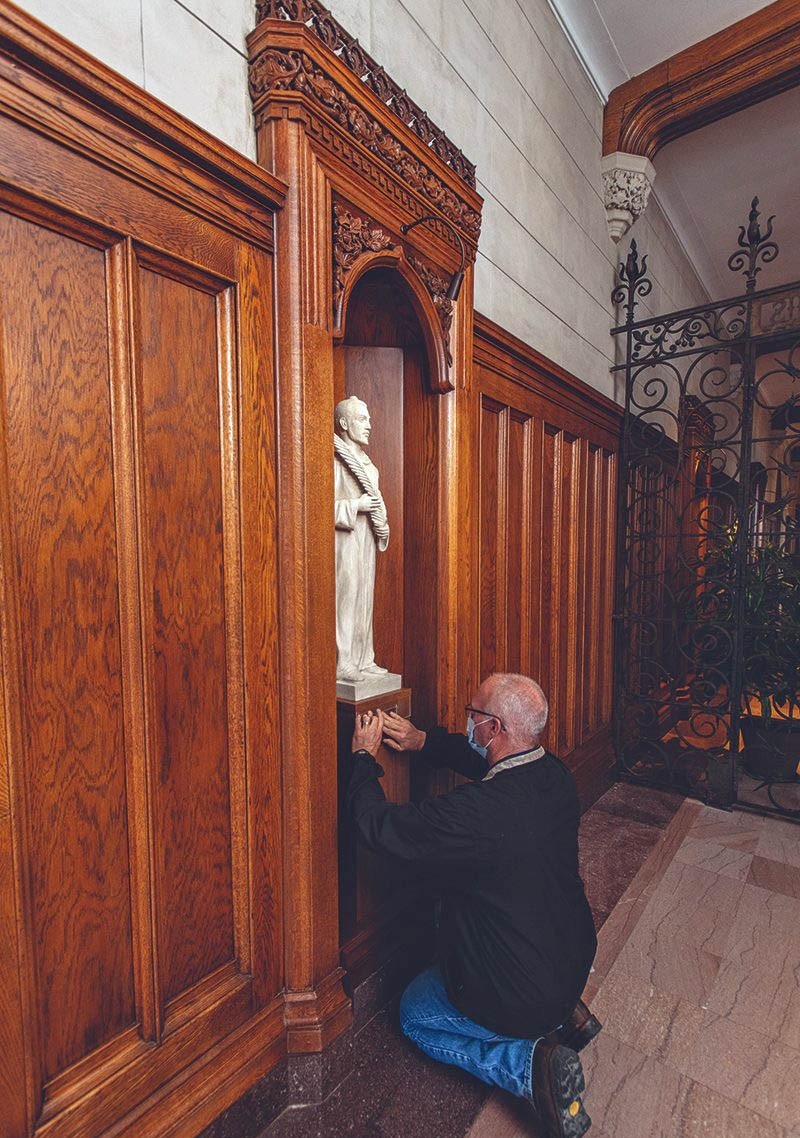 For those familiar with Jesuit history, some of the statues will be immediately recognizable. Flanking the hall’s central entryway are St. Ignatius, founder of the Society and author of “Spiritual Exercises,” and his contemporary Saint Francis Xavier, co-founder of the Society and renowned missionary. Further down the hall are Saint Robert Bellarmine, noted for his brilliance as a teacher and theologian, and Saint Alberto Hurtado, remembered for his service to the poor as a social worker in modern-day Chile.

The two remaining saints are less well-known, said Fr. Opeil. Saint Joseph Pignatelli is credited with re-founding the Society after its suppression in the late 18th century. Saint Paul Miki, born in Japan in 1562, was part of the first generation of converts to the Society in the Far East, and became a martyr for his faith.

In addition to their stories, the statues bring meaning and beauty to the hallway that Fr. Opeil and the other 35 Jesuits who reside in St. Mary’s traverse every day, whether on their way to Mass in the chapel or to their University classrooms and offices. After observing the empty niches for so many years, seeing them filled has brought joy during a difficult year.

“They fit and fulfill this part of the house,” said Fr. Opeil. “These saints have done their work and now other Jesuits are laboring here to serve God for his greater glory.”