The widely respected Catholic theologian, who served as director of Boston College’s Jesuit Institute and Peter Canisius Professor of Theology, has died at age 87

Michael J. Buckley, S.J., a widely respected Catholic theologian who served as director of Boston College’s Jesuit Institute and Peter Canisius Professor of Theology, died on July 25. He was 87.

A funeral Mass will be held at Mission Santa Clara de Asís in Santa Clara, California, on Friday, August 2, at 10 a.m. 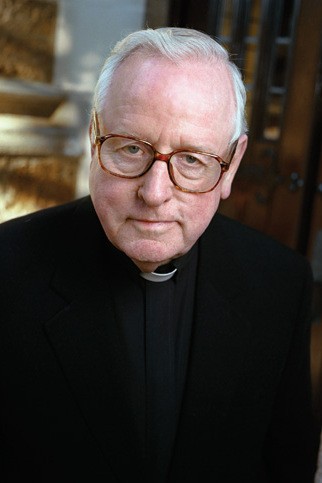 Fr. Buckley came to the University in 1992 with a distinguished record of research, writing, service, and teaching, as the author of At the Origins of Modem Atheism and Motion and Motion's God: Thematic Variations in Aristotle, Cicero, Newton, and Hegel, and editor of Religious Life in the U.S. Church: The New Dialogue. He had been a rector and professor at the Jesuit School of Theology in Berkeley, Calif., and executive director of the committee on doctrine for the National Conference of Catholic Bishops. At the time of his appointment as Jesuit Institute director, Fr. Buckley was a professor of philosophical theology at the University of Notre Dame and faculty fellow at Notre Dame’s Reilly Center for Science, Technology, and Values, and president of the Catholic Theological Society of America.

Interviewed by the Boston College Biweekly when his appointment was announced, Fr. Buckley said he envisioned a role for the Jesuit Institute in investigating “the relationship between faith and intellectual culture, the kinds of questions that define a university as Catholic, the integrating character of theology and its relationship to the other disciplines, and an informed sensibility concerning human misery. This will further the education of our students as members of the human family.”

During his tenure as director of the institute—founded in 1988 with an initial gift from the Boston College Jesuit Community and a matching gift from the University—Fr. Buckley was credited with strengthening and expanding the participation of BC faculty members in the institute’s research projects and interdisciplinary seminars. The institute also funds research fellowships, films, publications, and various scholarly events.

While at BC, Fr. Buckley—who was named inaugural Peter Canisius Professor in 1996—published three more books: Papal Primacy and the Episcopate: Towards a Relational Understanding;The Catholic University as Promise and Project; and Denying and Disclosing God: The Ambiguous Progress of Modern Atheism.

Fr. Buckley received the Catholic Theological Society of America’s John Courtney Murray Award in 2000, hailed as “a colleague whose power of mind brings insight and elegance to our communities of learning, and whose power of heart reminds us of our calling and the persistent courage that it requires.”

He stepped down as Jesuit Institute director in 2001 and continued his teaching and research as a member of the Theology Department. Five years later, he became the Bea Professor of Theology at Santa Clara University.

Summing up Fr. Buckley’s accomplishments in a 2001 interview with the Boston College Chronicle, Academic Vice President and Dean of Faculties William B. Neenan, S.J., said, “His charismatic leadership has firmly established the institute in the life of the University and extended its influence worldwide.”

In 2009, Fr. Buckley’s former doctoral students honored their mentor at a two-day symposium, “Oracles, Dissent, and Conversation: Reflections on Catholic Teaching,” co-sponsored by the Office of the President and the Church in the 21st Century. One of his protégés was Dominic Doyle, now an associate professor at the School of Theology and Ministry. “He was a fantastic, brilliant professor who was so dedicated to his students,” recalled Doyle in an interview with the Boston College Chronicle prior to the 2009 event. “He was a ruthless cross-examiner. He had a saying: ‘Behind every successful Ph.D. student is a director who nags.’”