Anthony Sears ’21 will become a double Eagle this summer when he graduates with a master's degree in cybersecurity. Photo by Caitlin Cunningham.

In 2014, Anthony Sears was a sophomore at Curry College in Milton, Mass., busy building an impressive résumé as a member of the Communication Scholars Program while acting in Curry Theater productions. By the following summer, he’d traded in his student ID for an assignment aboard the Coast Guard Cutter Mobile Bay, an icebreaker ship based out of Sturgeon Bay, Wisconsin. It was the first of many assignments he would have over the next four years.

It was a dramatic shift, but Sears has always relished new experiences, even when they’ve steered him down a nontraditional path. This summer he’ll begin another fresh chapter, graduating with a Master of Science in Cybersecurity Policy and Governance from the Woods College of Advancing Studies, and beginning a new career in the technology sector. He’ll be 27 years old when he accepts his diploma, and he wouldn’t change a thing.

“I did well at Curry, but I was living down the street from my childhood home, and I wanted to challenge myself on a new level,” he said recently. “People think you’re supposed to go to college at 18 and graduate at 22, but there’s no timestamp on a degree.”

‘I want to travel, I want adventure, and I want to serve’

Growing up in Boston, Sears had plenty of inspirations for military service in his family. His father was a Coast Guardsman, and his paternal grandfather had joined the Marine Corps before attending Harvard University and later commissioning as an Army officer. His maternal grandfather joined the Navy following the attack on Pearl Harbor, and served in both World War II and the Korean War.

In 2015, Sears finished up his spring semester at Curry, swore into the Coast Guard, and hopped on a bus to Training Center Cape May for boot camp. By August, he was underway on the Great Lakes with the 140-foot Mobile Bay. “I had aspirations to sail the world, but they had other plans for me," he joked. "I sailed the Great Lakes instead." 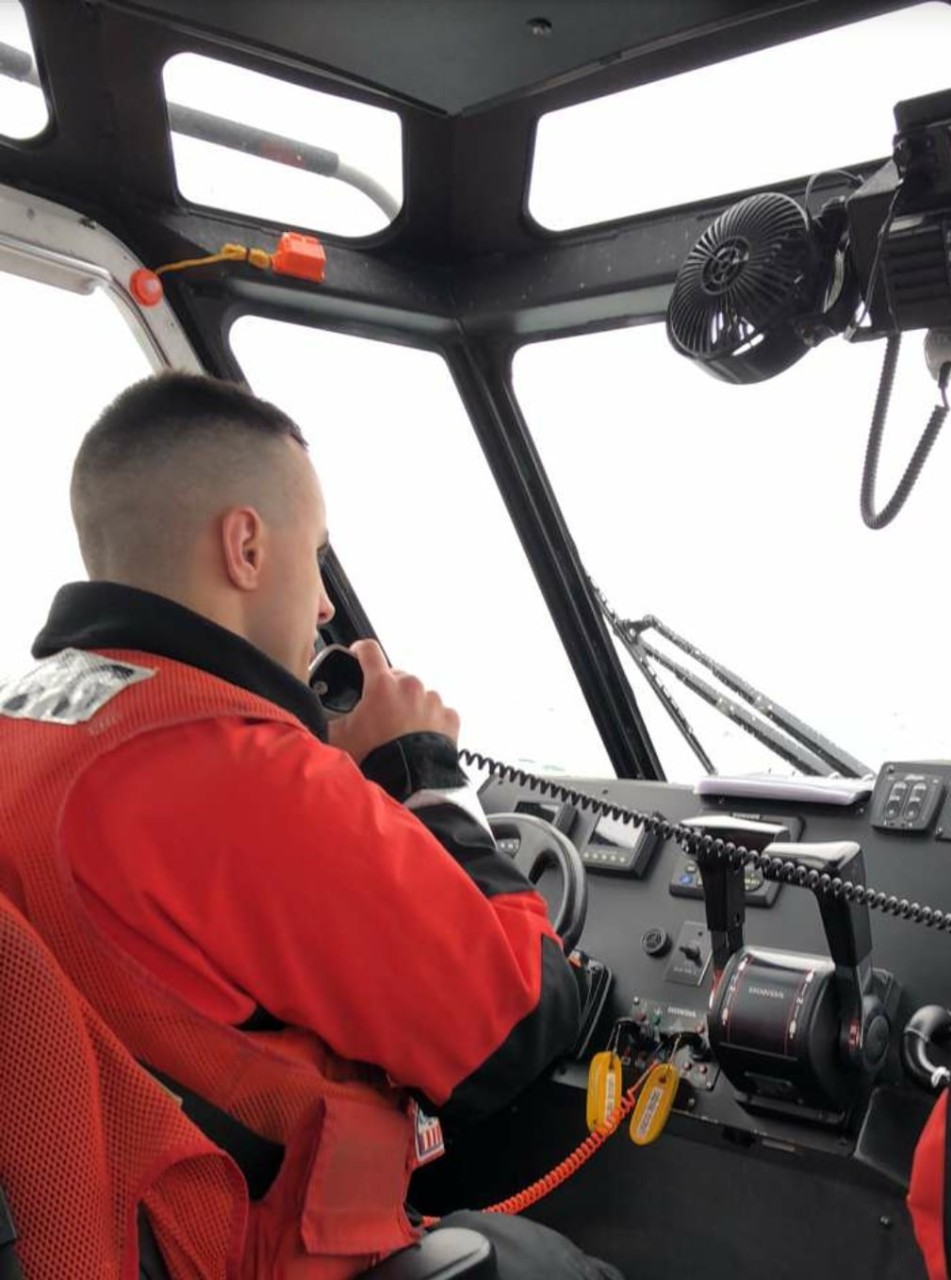 Sears acts as the coxswain in charge aboard a 29-foot Response Boat-Small II during a training in Block Island Sound.

The next year, he headed to Virginia to train as a Boatswain’s Mate, rose to the rank of Petty Officer, and spent the next three years stationed in Narragansett, Rhode Island. Here, he gained the biggest responsibility of his life as a coxswain in charge aboard 45-foot and 29-foot response boats, tasked with conducting maritime search and rescue missions in Block Island Sound. To prepare, Sears underwent a rigorous qualification process that evaluated his abilities in both seamanship and leadership.

“They basically hand you a $4 million boat at age 22 and say you’re in charge, don’t screw it up,” he recalled. “We’d train non-stop in vessel navigation and towing, damage control, first aid, and firefighting.”

Sears found the Narragansett area beautiful, but still not the tropical port calls he’d dreamed about. He started thinking about his next move. Reenlisting crossed his mind, but his superiors had made it clear that a far-flung assignment would only come after another multi-year commitment. Going back to school appealed to him, but the logistics seemed complicated.

“I wasn’t really sure how my credits would transfer, or what weight my GPA would carry,” he recalled. “When you’re a veteran, you don’t have a high school guidance counselor helping you, and I didn’t really know where to look.”

Sears was home on leave in the fall of 2018 when he got the answers to his questions. A theater buff, he was returning from a casting call for the movie Ted 2 (he ended up being an extra in the film) when he caught a familiar glimpse of Gasson Hall in the distance and made an impulsive decision.

“Like all kids from Massachusetts I had wanted to go to BC at one point and I thought, ‘What the heck?’” he recalled. “I parked and joined the first tour group I saw. I felt at home right away.”

The visit turned into an hours-long meet-and-greet with members of the Woods and BC veterans communities, and Sears spent the next three months “putting his heart and soul” into an application for admission. He finished out his Coast Guard contract, was honorably discharged from active duty, and attended his first class as an Eagle in the fall of 2019.

Being back on a college campus felt novel to Sears, but the academic pace didn’t faze him. He took pointers from a classmate who was a Marine veteran, and aced his first midterm. The Coast Guard had prepared him to absorb “a fire hose of information,” and to put in the work necessary to master material. He enrolled in all sorts of classes, relishing the next phase of his adventure.

“I had such an awesome experience because I got to take classes that ranged from leadership to criminology, to topics like Christianity in Africa and History of New England,” he said. “Plus, I had people in my corner rooting for me like my advisors and the other veterans.”

The Woods College advising office helped Sears use previously un-transferred JST credits from the Coast Guard to graduate a year early, allowing him to use the remainder of his GI Bill to cover a master’s degree. A Navy veteran who became Sears’ unofficial mentor encouraged him to enroll in the Woods Cybersecurity Policy and Governance program, and Sears applied, taking his first two courses—Role of Intelligence and International Cybersecurity—while still technically an undergraduate.

“The Coast Guard motto is semper paratus,” he said of his drive. “We’re always ready.”

‘A small community within a bigger community’

Looking back, it’s impossible for Sears to separate his BC experience from his identity as a veteran. He feels he owes much of his academic success to the preparation he received as a Coast Guardsman, both in the classroom there and as part of a diverse crew working toward a common goal. At the same time, having other veterans in the classroom at BC, as well as access to the University’s student-veteran resources, helped ease his transition from active-duty serviceman to full-time student.

“One of the best resources at BC for veterans is other veterans,” he said. “We have a similar background, a similar outlook on life, and we’re not afraid to engage in dialogue and debate. We bring a lot, I think.”

In February, Sears was nominated by his advisors for the American Council on Education’s 2021 Student Veteran of the Year Award, which recognizes veterans who have used​ military education credits to earn a college degree. This summer, he’ll receive his second BC degree, start a new job at Dell EMC, and begin pursuing an M.B.A. at the Carroll School of Management, all while continuing to serve in the Coast Guard Reserve.

Off the beaten path, and right on track.