More than a marathon

Senior Olivia Colombo used self-advocacy, bravery, and sheer force of will to turn a dire medical prognosis into her proudest athletic achievement

Crossing the finish line at the Boston Marathon is a momentous occasion for any runner, but for Olivia Colombo, it marked the end of a journey much longer than 26.2 miles.

Colombo, a student in Boston’s College Lynch School of Education and Human Development, has struggled with a variety of rare and undiagnosed medical conditions for most of her adult life. She hit a low point in February, when the pain in her ribs and abdomen became excruciating, and her weight and blood pressure dipped dangerously low. Her medical team was unsure if she would live to graduate from college, and diagnosed her with adult failure to thrive.

At that point, Colombo was a regular at both Massachusetts General Hospital and Boston Children’s Hospital, where she’d sought opinions from 33 doctors and endured 12 overnight stays her junior year. She’d been diagnosed with a variety of chronic conditions, including Postural Orthostatic Tachycardia Syndrome (POTS), Complex Regional Pain Syndrome (CRPS), and Mast Cell Activation Syndrome (MCAS), but no medication or treatment had been successful in controlling her symptoms. Unable to find a solution, some doctors dismissed her condition as either psychosomatic or the result of disordered eating.

“I had doctors from the best hospitals in the world tell me that the pain was in my head, that I was anorexic—things that were so off base,” she recalled. “I felt very much lost in the middle and like I wasn’t being listened to.”

Colombo leaned heavily on her BC support network, which included friends who would drive her to the emergency room and Dr. Amy Costa of University Health Services, whom she met with several times a week.

In particular, many doctors were dismissive of Colombo’s growing suspicion that she had Median Arcuate Ligament Syndrome, known as MALS, a compression syndrome of the celiac artery and surrounding nerves. The symptoms seemed to mirror her own: intense gastrointestinal pain (patients often describe MALS pain as being on-par with end-stage pancreatic cancer) that doesn’t respond to GI medicine or show up during scopes and tests. 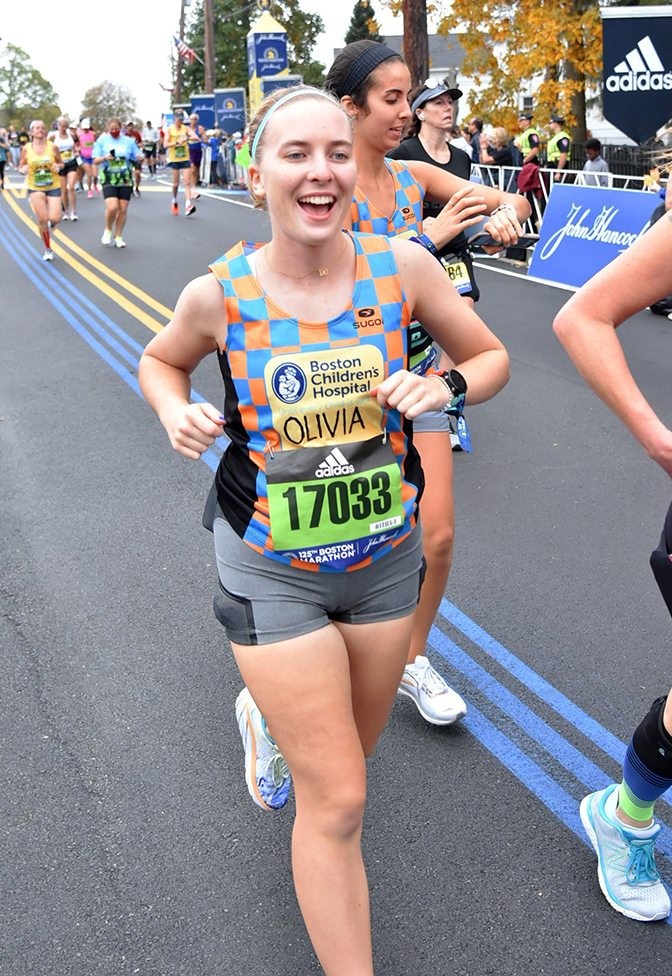 As part of the Miles for Miracles team, Colombo raised more than $8,000 for Boston Children's Hospital.

Colombo asked repeatedly to be tested for MALS, but was told the condition was “too rare” to justify the procedure. She persisted, eventually gaining a preliminary test, despite the fact that her medical condition had begun to stabilize by spring semester, allowing her to gain weight and get cleared to exercise. In May, she signed up to run the Boston Marathon on the Children’s Hospital Miles for Miracles team, just as initial testing showed evidence of MALS.

“I had a mindset shift,” she recalled. “I remember thinking, this has taken so much from me. It took away my high school years, my prom, my chances of getting recruited to run in college...and I’m kind of done with it. I’m done letting MALS control my life.”

Then in June, her doctors agreed to a diagnostic procedure that gave Colombo the answer she’d been looking for. She did appear to have MALS, they said, and was a candidate for a surgical procedure widely regarded as a cure. With the operation scheduled for July 14, Colombo kept up her training, tuning out one of her doctors who said she was “crazy” for thinking the procedure would help.

When she woke up in a post-surgery haze, the first thing Colombo remembers feeling was the absence of pain. Despite having six incisions in her abdomen, she could finally take a deep breath. Three weeks later, she hit the pavement, sweating through long runs and hill workouts near her family’s home in Massachusetts, relearning what it felt like to push herself without passing out from dehydration or low blood pressure. She called this phase “life 2.0.”

After cheering on the Boston Marathon runners as a freshman at BC, Colombo asked her doctor at the time whether it was something she could ever hope to accomplish.

“She was really encouraging but also said ‘this is going to be a big struggle for you, there are a lot of things you need to do before then,’” Colombo recalled.

When the starting gun went off three years later, Colombo kept pace with her Children’s Hospital teammates, then slowed a bit as the middle miles took their toll. She knew if she could make it to mile 21, where her friends were waiting with signs and shouts of encouragement, she would finish.

“I was so focused on surviving each mile that I didn’t get to appreciate the enormity of it as much as I thought I would,” she acknowledged. “But I feel like my friends held that space for me, and did a good job of reminding me how huge this is.”

Colombo crossed the finish line with tears in her eyes after running for just over five and a half hours. The next day, she arrived at her field placement at the Sojourner House in Roxbury, sore but ready to work. In 2023, as part of a combined five-year program run by the Lynch School and Boston College School of Social Work, she’ll graduate with a master’s degree in social work, which she hopes to use in a hospital setting.

Going forward, Colombo is still dealing with chronic conditions, but with MALS erased from the equation she feels equipped to handle whatever life throws her way. In addition to her support network, she credits a mantra that she and her mother developed—“strong and brave”— with  helping her stay positive.

“We would just repeat that back and forth to each other,” she said. “And I think I intrinsically believed that I am strong, I will get through this, and my life is worth saving.”