A story to tell

Some people exercise or meditate, others keep a journal, but ever since freshman year of high school, Kudzai Kapurura ’23 has worked through her emotions by writing poetry.

In snappy, high-impact verses, she’s celebrated her identity as a first-generation American; expressed frustration at the microaggressions she faced as a Black teenager attending a predominantly white high school; and revelled in the intimate joy of having a friend braid her hair for the first time in years. She’s written poems while riding the train, studying in the library, and—her personal favorite—seated in the back row of her high school history class.

“For me, writing is really a form of therapy,” she explained. “When I’m the most happy, or sad, or frustrated, or angry, if I write it down, it will feel like I put that energy somewhere.”

Kapurura’s poems are intensely personal, but the rising junior and economics major isn’t shy about performing her work. In April, she took home the title of American’s Best College Poet after competing against writers from across the country in a three-part online contest hosted by celebrity poet Carlos Andrés Gómez. Along with the title, she collected a $1,000 cash prize.

Throughout the competition, Kapurura earned high marks from the judges for her poems detailing her lived experience as a young woman of color in America. In the finals, she recited a powerful call-and-response piece describing the stereotypes and assumptions she’s been confronted with throughout her life. “I’m kinda tired of being / intellectually underestimated and / athletically overestimated,” she read. “I’m kinda tired of writing poetry / in hopes to change the world.”

Kapurura’s parents emigrated to the United States from Zimbabwe in 2000, a year before she and her twin sister were born. They settled in Dallas, inspired by the popular television show of the same name, but soon moved to Salem, Oregon, a city with a Black population of less than two percent. 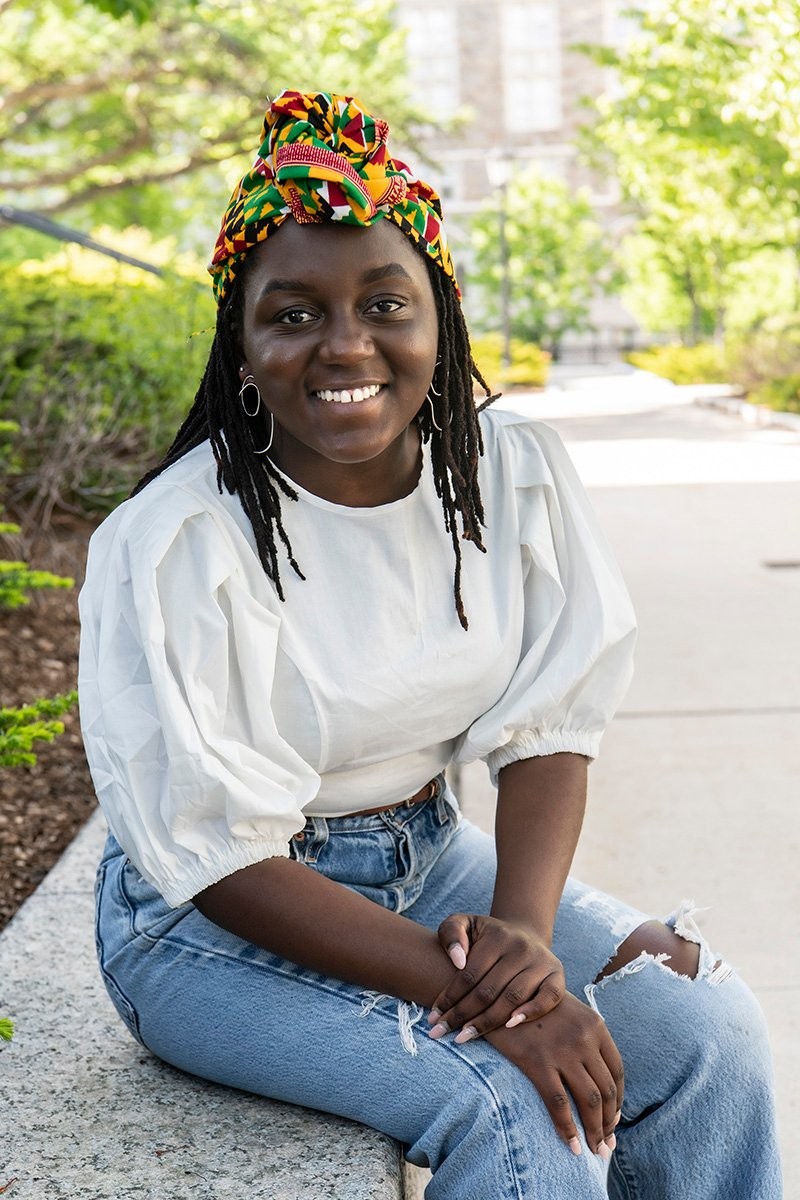 For Kudzai Kapurura, "writing is really a form of therapy."

Encouraged by her parents “not to play with school,” Kapurura excelled academically, taking part in the International Baccalaureate program and serving a term as a student advisor to the State Board of Education working on diversity, equity, and inclusion issues. She discovered her love of poetry during a freshman-year seminar, where she and her classmates sat in a circle and read their poems out loud.

“I loved the way you could really express your ideas and your words with different concepts and metaphors,” she recalled. “You could put things in different places to make it sound a certain way. I was fascinated by it.”

When it came time to apply to colleges, Kapurura knew she wanted to attend a university where she would no longer be the only Black woman in the classroom. She applied to schools in large, metropolitan areas, and when her Boston College acceptance letter arrived, she read it twice before sharing it with her family. The news caused mass celebrations in both Oregon and Zimbabwe, where relatives cheered her on via WhatsApp messages. Officially the first person in her family to become a U.S. citizen and attend college on the East Coast, “I am literally my ancestors’ dreams,” Kapurura said.

At Boston College, Kapurura carried the weight of her identity as a bicultural woman of color and first-generation American. She chose economics as her major because it was centered around problem solving and, combined with her African and African Diaspora Studies minor, it would give her the tools to pursue a career focused on social justice. For her first year, she put poetry aside in favor of her studies, adopting a “super studious, always-in-the-library” persona.

“I was so hyper-focused on wanting to achieve,” she said. “I wasn’t nice enough to myself sometimes.”

Sophomore year brought a fresh outlook, as well as the historic COVID-19 pandemic. Determined to pursue a more balanced lifestyle, Kapurura began participating in virtual programs outside of class, including facilitating Courageous Conversations, a series of dialogues around racial justice, and returned to writing. In May, she recorded her second TEDx Talk as part of the Boston College chapter, using Plato’s Allegory of the Cave, which she studied while enrolled in the PULSE Service Learning Program, to describe how her bicultural identity has helped her pursue a meaningful life.

In the 10-minute speech, which she delivered from memory, Kapurura acknowledged how different her life would be had her parents remained in Zimbabwe. Higher education, if it were an option, would likely have required a bribe, she said. Instead, as an American, “the question was never ‘if’, but ‘where.’”

That knowledge is what fuels her resolve to take every opportunity that comes her way, whether it’s a poetry competition or a chance to share her story with the world.

“I believe leading a meaningful life is taking what you have and what could have been, and using both in order to become driven and pursue your passions to the best of your ability,” she concluded. “I am reaffirmed that I am on the path to a meaningful life through my attendance at BC. Because so much is at my fingertips, I see no other option than continuing to make history in my family line.”