The Morrissey College of Arts and Sciences senior has started two companies since arriving at BC in 2017, his entrepreneurial bent fueled by his interest in studying history, his undergraduate major. When he faced a potential business crisis last summer as a result of President Trump’s battle with China over technology/security issues, Hui-Bon-Hoa found both a solution and an opportunity of great promise.

Of course, like millions of other people, during the past several months Hui-Bon-Hoa also has had to deal with an array of calamities: a pandemic, racial tensions, bitterly polarizing politics. 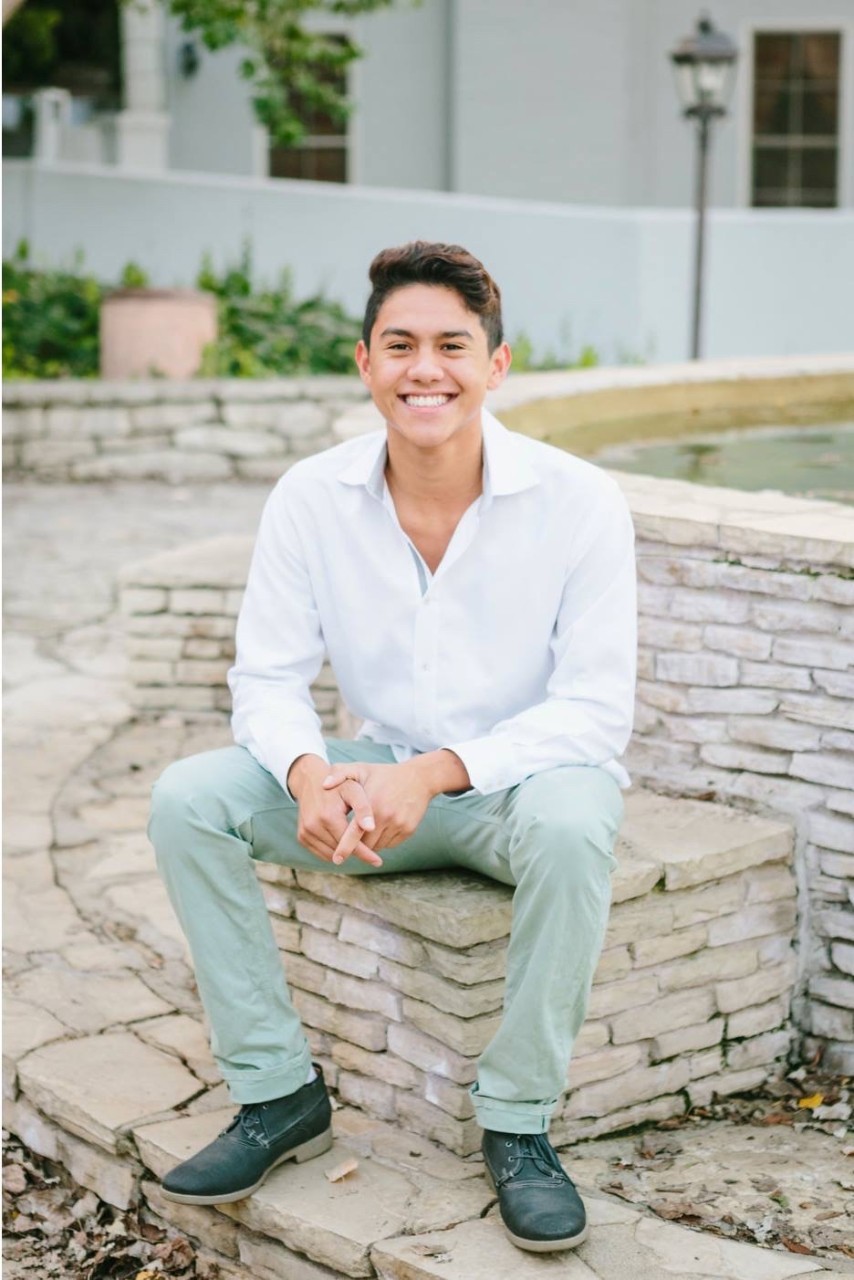 Then last fall, Forbes—one of the world’s preeminent business publications—chose Hui-Bon-Hoa for its annual “30-Under-30” list, a veritable who’s-who of top young entrepreneurs and influencers in some 20 categories. Hui-Bon-Hoa was cited in the marketing and advertising category along with his business partners Jeffrey Zhao and Karine Hsu; the trio head up Slope Agency, a marketing and design agency for e-commerce and technology companies.

Given all that’s transpired just in the past year, Hui-Bon-Hoa’s initial comment on the Forbes citation seems quite understandable: “It’s all pretty surreal.”

The Los Angeles-area native continued, “I am very thankful to my family and friends for their support, and to my colleagues who’ve been flexible with me. Ultimately, I appreciate having this kind of recognition and acknowledgment. At the end of the day, though, it’s an accolade, and I don’t want to overthink it too much—just keep moving forward.”

To hear Hui-Bon-Hoa recount it, his path to Slope and Forbes could fuel a conversation on the nature of luck—how it’s not just the residue of hard work but also the connections you seek out and retain, and the chances you’re willing to take.

According to Forbes, Slope—whose clients include Lego, Daily Harvest, Eco, and Gravity Blanket—has “grown revenue 400 percent year-over-year and has worked with over 100 different companies, generating over $70 million in revenue for them.” Hui-Bon-Hoa arrived at Slope last August when it acquired the company he had founded in 2019, Abacus Growth.

“It was Friday, I was cooking dinner, looking forward to the weekend, and then I heard from one of my employees: ‘We may not be able to use TikTok anymore.' I never had a good mood so completely change. ”

Abacus Growth had drawn attention as one of the first, and few, marketing agencies approved to use the Chinese video-sharing mobile app TikTok just as it began enjoying vast popularity by social media users. Then came the summer of 2020, and Trump’s warnings about TikTok as a threat to national security, culminating in his August 6 executive order banning its use in the United States.

“It was Friday, I was cooking dinner, looking forward to the weekend, and then I heard from one of my employees: ‘We may not be able to use TikTok anymore,’” recalled Hui-Bon-Hoa. “I never had a good mood so completely change.”

The prospect of losing a key component of Abacus’ operation was chilling in and of itself, but Hui-Bon-Hoa had other reasons to worry: He had employees whose jobs would be gone if the agency were to fold.

Hui-Bon-Hoa knew Zhao and Hsu professionally, and the pair were impressed by Abacus’ utilization of TikTok. After Trump’s announcement, the Slope execs proposed that Abacus form a partnership with them. For Hui-Bon-Hoa, it made sense: Abacus would be part of a larger, more established agency with a good client base—and best of all, his employees would be part of the company.

“Slope was still bullish on the idea of TikTok, even with the possible ban, and in retrospect that seems to have paid off,” said Hui-Bon-Hoa, noting that Trump’s executive order was never fully implemented and has faced legal setbacks. “I acted in what I felt was the best interests of my employees. But we’re all excited about this partnership and what lies ahead.”

Hui-Bon-Hoa’s entrepreneurial experiences began in high school when he and some friends (“We were humanities geeks who had a contest to see which one was the best writer”) started a political blog during the 2016 election campaign that wound up going viral. They later sold the blog content to a publication (“We thought we were rich, at least for high school”). As a first-year BC student, Hui-Bon-Hoa started a company with a friend who had an idea for an application that would share curated articles for reading. They raised almost $4 million in support of the venture, and he contemplated leaving BC to devote full time to the company, but decided to keep up his studies.

Looking for another opportunity, in his sophomore year Hui-Bon-Hoa applied to the Dorm Room Fund, a venture capital firm focused on investments in student-run startups, and he and another friend hatched the idea of forming a marketing agency; it was a field with which Hui-Bon-Hoa was unfamiliar, but his partner explained the structure and format of agencies to help orient him. Wanting a name with a scientific tint to it, Hui-Bon-Hoa—who subsequently ran the company on his own after his friend left (amicably)—chose to call the agency “Abacus,” after the calculating tool; on Hui-Bon-Hoa’s desk sits an abacus that belonged to his great grandfather.

There was a lot of “learning on the fly” for Hui-Bon-Hoa, but he also took a Carroll School of Management course in marketing principles taught by Associate Professor of Marketing Linda Salisbury. “The class was very helpful: less academic, more on-the-ground. I had been going at marketing intuitively, not spelling it out thoroughly, so this gave me a good grounding,” said Hui-Bon-Hoa.

“On a macro level, I feel history lends insight into how people behave, how they respond to the events and trends around them. I’ve found an awareness of that is very useful in marketing decision-making.”

Ironically, Hui-Bon-Hoa might never have made it to the Heights except for a twist of fate. He had toured BC early on in his college search and was impressed by the “phenomenal campus” and the University’s Jesuit, Catholic character. As an accomplished water polo player, however, he hoped to land an athletic scholarship, and thought he had one in hand at another school. But the offer was later withdrawn after improprieties were found in the program, leaving him only a few weeks to apply to other colleges.

Remembering his favorable impression of BC, Hui-Bon-Hoa applied and, working with Associate Director of Undergraduate Admission Steven Koo, was able to gain admission and enroll.

Hui-Bon-Hoa’s decision to major in history stemmed from a longstanding interest and curiosity in the subject, as well as what he calls an “obsession” with writing. “I’ve always admired the work of historians, partly because they represented a contrast to the passive voice I’d tried to overcome in my own writing, and a standard I wanted to meet,” said Hui-Bon-Hoa, who points to Niall Ferguson and Larry Schweikart, as well as BC History Professor Seth Jacobs, his advisor, as among his model historians.

He also came to realize that studying history has its practical implications. “On a macro level, I feel history lends insight into how people behave, how they respond to the events and trends around them. I’ve found an awareness of that is very useful in marketing decision-making.”

As Abacus continued to gather strength, Hui-Bon-Hoa saw the intersection of good luck and good connections. A friend helped land a big client: the Emerson Collective, the social change organization founded by Laurene Powell Jobs, widow of Steve Jobs. Then, an account representative from Facebook who had worked with Abacus caught on with TikTok, and convinced Hui-Bon-Hoa to get on the platform. It turned out to be one of the most important decisions he ever made, giving Abacus high visibility in the field and attracting the attention of his future partners.

“TikTok marketing is currently the Wild West of social media advertising—companies that take the plunge early stand to reap huge benefits of being a first mover in the space,” he wrote in the Slope blog shortly after joining the company. “The nature of TikTok’s platform makes it possible, with some clever marketing strategies, for your brand or company to achieve virality without a large budget.” ‍

Hui-Bon-Hoa thinks that a Biden administration may decrease the possibility of any United States action against TikTok. But he also eyes other trends likely to affect his profession, especially how well the American economy recovers from COVID-19 (“It’s been tragic for so many businesses”). As it is, he says, a pandemic-related general decrease in productivity has coincided with an increased demand for Slope’s services, as companies strive to retain, or improve, their positions in the marketplace.

However, Hui-Bon-Hoa sees a longer-term factor at work. “I think what’s changed is not in what’s being sold but how. The growth of technology and social media, and so on, has resulted in the democratization of commerce. You can have a creative 28-year-old start a company in his or her home, and be able to compete with some of the larger incumbents that can’t function as easily as five people working out of a basement.

“So, the big challenge is to build a brand and put it out there. That’s something my colleagues and I have been able to help our clients with, and it’s going to be as important as ever in the months and years ahead.”