A career marked by curiosity

This miniature machine is among the gizmos and gadgets of 'Kelly's Curiosity Cabinet.'

Step into Professor T. Ross Kelly’s Merkert Chemistry Center office and you see signs of what has mattered most during the course of his 50-year career at Boston College—his students and an enduring sense of curiosity about the way things work.

There is a massive poster board bearing the photographs and names of the students from his last class in Organic Chemistry, a course that earned him a legendary reputation for his teaching. Long ago he started making the boards so students in the large lectures wouldn’t feel anonymous.

The shelves in his office are filled with more than 150 “curiosities”—handcrafted figures, motorized toys, and oddities that seemingly fool the eye, yet eventually showcase a scientific principle, and are showcased online, as well. 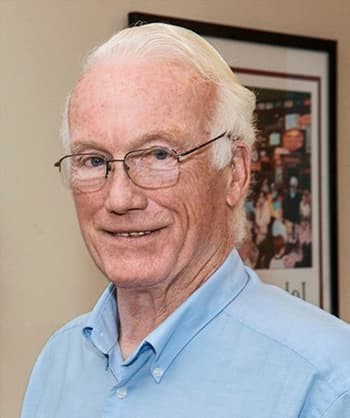 “In Organic Chemistry, I did a lot of demonstrations,” said Kelly, the University’s Thomas A. and Margaret A. Vanderslice Professor of Chemistry, who retires at the close of the academic year. “The students describe me as having a passion for the subject. I do. I think organic chemistry is neat and I always tried to communicate that with demonstrations and other things I talked about during the lectures.”

An organic chemist by training, Kelly said that during the course of his career he veered into related sub-fields such as carbocyclic and heterocyclic chemistry. He’s worked to formulate chemical reactions using natural materials and non-natural materials. His research has produced four patents over the years.

Kelly is best known for his work developing a “molecular motor” by using organic synthesis to construct molecules that could be made to rotate by providing a chemical fuel.

As they started their research, the concept of starting such a motor stymied Kelly and his team. “Then we thought, if we can’t start it, maybe we can learn something by stopping a motor that is already running,” said Kelly. “That got us going.”

Kelly’s research led to findings that were published in the prestigious journal Nature and other publications. His influential work was referenced in 2016, when three other researchers in the field received the Nobel Prize in Chemistry for their work on “molecular machines.”

“Ross Kelly demonstrated early on that a Chemistry faculty member could be both an outstanding, internationally-renowned scientist and a highly effective and valued educator,” Chemistry Department Chairman and Professor Marc Snapper said. “His research, funding, publication, and teaching successes raised the bar for all of us that followed him. Fortunately, Ross was also there to help guide and mentor us in achieving our successes as well. He was truly instrumental in elevating the department into what it is today.”

In 1989, Kelly became the first science faculty member to receive an endowed professorship, the Thomas A. and Margaret A. Vanderslice chair. “I am very grateful for all Tom and Peggy have done over the years. The chair gave me a lot of flexibility through financial support for research, student researchers, and travel. It gave me a lot of freedom.”

“Ross Kelly demonstrated early on that a Chemistry faculty member could be both an outstanding, internationally-renowned scientist and a highly effective and valued educator.”

A native of Davis, Calif., Kelly said his interest in science—in chemistry—grew out of his group of friends and their interest in deciphering how things worked, as well as “blowing things up.”

“We got into rockets and things that blew up,” said Kelly. “I think that’s still something that turns students on to chemistry.”

His route to the east coast began in high school, when he attended a summer science program in Connecticut. He earned his bachelor’s degree at the College of the Holy Cross in 1964. He returned to the west coast for graduate school, earning his PhD in Chemistry from the University of California Berkeley in 1968.

His work has been recognized by the National Institutes of Health and the American Chemical Society. Kelly was named a fellow of the American Association for the Advancement of Science in 2007. But he points to his 2004 selection as Teacher of the Year by members of the Phi Beta Kappa honor society as one of the most gratifying recognitions he has received.

“That is the thing I won that I’m most proud of,” said Kelly. “The students chose me. Not faculty. The top students at the University. So, that was very gratifying, especially when you are a teacher of organic chemistry, which is the bane of many a student’s existence.”

In retirement, Kelly said he plans to sleep a little later and travel more with his wife, retired mathematics faculty member Nancy Rallis.

“BC is a nice place. It has been a great place to work. There are a lot of good people and not a lot of politics,” said Kelly. “I will miss the students the most. They’ve got energy, enthusiasm, and intelligence. Teaching them is challenging and stimulating.”