A longtime BC Lynch School faculty member, she was dedicated to helping those with disabilities

Retired Lynch School of Education and Human Development Associate Professor Jean F. Mooney, whose 32 years at Boston College were highlighted by a dedication to helping those with disabilities to learn and thrive, died on January 8. She was 86. 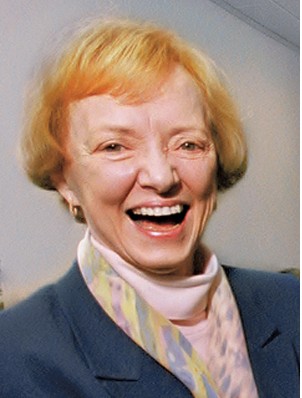 Dr. Mooney was the longtime director of the Campus School at Boston College, which educates students ages three to 21 with multiple disabilities and complex health care needs. She also was instrumental in developing The Connors Family Learning Center, which seeks to enhance the quality of learning at BC by offering services to students with learning disabilities, and providing tutoring and skills workshops for all students.

“Her BC colleagues valued her generous spirit and her willingness to support and enhance their work and careers. Her graduate and undergraduate students regularly commented on her concern for them as individuals, and for the care with which she approached her teaching,” said Walsh.  “Her commitment to children with a whole range of special needs—from mild to severe—was always front and center in her work. She made a substantial intellectual contribution to the campus initiative to promote collaboration of faculty across all of the professional schools around the issues of children living in poverty, which ultimately led to the development of the Center for Optimized Student Support.”

Born Jean Bradley in Peabody, Mass., she was educated at the Newton Country Day School of the Sacred Heart. A graduate of Smith College, she journeyed to Stanford University where she earned a master’s degree in education with a focus on early childhood development and speech therapy. She married and taught first grade for one year in Southern California. Following seven years as a stay-at-home mother, Dr. Mooney resumed her career as a speech therapist in Natick, Mass., but it was the desire to help children with learning disabilities that motivated her to earn a Ph.D. from Boston College, where in 1971 she began a lifelong career in special education. She started as a classroom instructor and later rose to the rank of department chair.

Dr. Mooney served as a member of the University Council on Teaching, where she helped lead a 1981 initiative to improve academic advisement for undergraduates and, 13 years later, was involved in planning a series of seminars, “Promoting Teaching Excellence,” to aid faculty in better understanding the intellectual and emotional characteristics of the students in their classrooms. Speaking to the Boston College Chronicle, Dr. Mooney explained that students’ personal or social issues may often arise in classroom settings and these occasions demonstrate the need for collaboration between the academic and student affairs sectors of higher education.

“Students can be very self-revealing in their writing,” she said, “and faculty here have often felt they should respond to what they were reading about. You can’t just look at the grammar, spelling, and punctuation and ignore what the student is saying. It means a new and exciting role for faculty, but they often need to realize what taking on that role involves.”

Following her retirement in 2003, Dr. Mooney volunteered at the Gardner Pilot Academy, where she provided a variety of services weekly at the pre-K-8 school in Allston, and at the Saint Columbkille Partnership School, a pre-K-8 Catholic school that is in partnership with BC and the Boston Archdiocese.  She was an active principal of the BC Association of Retired Faculty (BCARF).

In 2011, the Gardner Pilot Academy presented the inaugural Gardner Champion Award to Mooney for her years of “tremendous service to the families and staff” of the school. Her study of alternatives to digital games led to the creation of a STCPS club that encouraged third-to-fifth-grade girls to consider engineering as a potential career. With a grant from the BCARF, Dr. Mooney purchased learning tools developed to spur girls’ interest in STEM for the Brighton school.

“The girls just love it,” said Dr. Mooney in a 2016 Chronicle interview. “There’s the fun, social aspect, obviously, but you can see how their cognitive development and problem-solving skills benefit. And at a time when women make up only 14 percent of the world’s engineers, they should have the opportunity to contribute to this field.”

Dr. Mooney’s longtime friend, BC Office of Employee Development Director Bernard O'Kane, characterized her as “generous,” “fearless,” and “a trailblazer.”

“Jean was a very big-hearted woman, as a professional and as a person. She freely gave of her talent both in the classroom and by guiding young people with various learning disabilities, whether from privilege or modest means, to bring out the very best in themselves and to become successful contributors to society. There was nothing too big for Jean to take on. She loved a ‘project’ whether a person or challenge at work or in life. She had unending energy and gave of it freely.”

O’Kane said that Dr. Mooney’s pioneering spirit emerged as a Smith undergraduate: “Jean wanted to take a class not offered at the college, so she petitioned the dean to take it at a sister institution. Never done before, the request went to the board, which ultimately approved it, but since students weren’t allowed to have cars on campus, the college sent a limousine to take her back and forth to class each week. Thus, began the collaboration among the Amherst-area colleges that continues today.”

BCARF President  Alec Peck, who noted that Dr. Mooney had won the student-sponsored “Teacher of the Year” award six times during her career at BC, said she took a leadership role in BCARF, serving as president and executive committee member for many years and running the association’s book club.

“Jean was a treasured colleague of mine and many BC faculty, and a highly valued professor,” said Peck. “She was a true friend to many [BCARF] members. She will be sincerely missed.”

Lynch School Associate Professor Lillie Albert, who traveled with Mooney to Europe and the UK, said, “I greatly respected Jean as an educator, researcher, and a dear friend.

The most important thing that I learned from her is that so much about living life, as a human being and an academic, is about humility and gratitude. I’m going to dearly miss her.”

Mooney’s son, John ’83, said of his mother, “It’s impossible to estimate how many lives she has touched with her endless gifts of time, caring, empathy, and love.”

In addition to her son, Dr. Mooney is survived by her daughter, Julie Gorman, and grandchildren Kate and Abby Gorman, and Tess Mooney.