A funeral service was held on October 31 in St. Ignatius Church for James F. Halpin, a former associate dean and professor in the Carroll School of Management who also served as rector of the Boston College Jesuit community. Dr. Halpin died on August 18 at the age of 89. 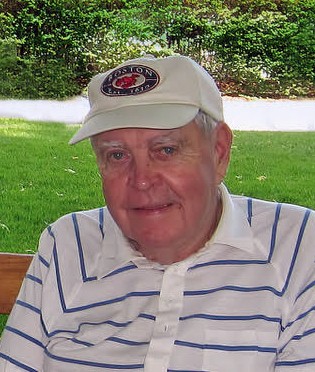 A Pennsylvania native who grew up in Waterbury, Ct., Dr. Halpin was interested in moral philosophy and ethics, and their relevance in many contexts. He entered the Jesuit order in 1949, and studied in Belgium, Spain, and Italy before being ordained. (He left the order in 1993.) He began a life of service in higher education in 1968 as a faculty member at the Weston School of Theology in Cambridge, where he taught Christian ethics.

In his homily for Dr. Halpin, former University Secretary Joseph Duffy, S.J., said Dr. Halpin’s qualities were readily apparent during his training as a Jesuit: “Early on, Jim developed a reputation as one whose views were respected, whose company was valued, whose leadership potential was recognized and nurtured.”

Dr. Halpin came to BC in 1971 as director of the University’s Program for the Study of Peace and War, which was created by students as a response to issues arising out of the Vietnam War. The program offered interdisciplinary courses through the Physics, Sociology, Political Science, History, Anthropology, Theology, and Philosophy departments, delving into wars across the centuries—from the Peloponnesian War to the American Civil War and World War I—and the nature of conflict itself, as well as studying concepts around defense and negotiation, and Christian thought on war.

In 1974, the program sponsored a conference for Boston parents and others affected by the crisis over court-ordered desegregation in the Boston Public Schools. Explaining the program’s interest in holding such an event, Dr. Halpin told BC's undergraduate newspaper The Heights "[it] has to do with peace and violence in the City of Boston: How do we overcome this problem?"

Well after his tenure with the Program for the Study of Peace and War, Dr. Halpin remained thoughtful about issues of conflict. In 1991, as the first Persian Gulf War flared, he spoke with the Boston College Biweekly about whether it met the standards of the Christian tradition of justifiable conflict, known as the Just War Theory.

“This is a theory, don’t forget, that was initiated in the fifth century and grew to maturity in the 16th or so,” he said. “It was much easier in Aquinas’ day to make distinctions and establish parameters of morality in war. It was easier to distinguish between combatants and non-combatants. War was a hand-to-hand enterprise, in which bows and arrows were aimed at particular individuals. With the sophisticated weapons we have today, it’s harder to measure proportionality, it’s harder to make those distinctions.”

Dr. Halpin also served as a chaplain at the University, and in this role he vigorously promoted BC’s formational mission. In a 1971 interview with The Heights—which depicted him as a busy man “always at a typewriter and answering endless telephone calls”—Dr. Halpin expressed concern about undergraduates who only focused on academics and extracurricular activities: "Let's face it, the University must be more than this; it must serve as a value center for those there, where students can look into themselves, figure out just who they are, and what they want to do with their lives."

He was a driving force behind the opening of a center for commuting students in Murray House on Hammond Street, which offered lectures, plays, a film series, receptions for speakers, parties, and socials, and provided rooms for studying or leisure. In the 1970s, he co-founded a campus alliance to foster greater awareness of the causes of and solutions to hunger, co-chaired a committee to establish a veterans’ affairs office at BC, and was part of a four-person team that taught a non-credit course intended to help students in being sexually responsible adults.

A member of the Theology Department at first, Dr. Halpin later transferred to the Carroll School’s Operations and Strategic Management Department. Among other ethics-related courses, he taught Introduction to Ethics to first-year students—covering topics like moral development, cultural relativism and Kant’s Categorical Imperative—and a course in social responsibility to M.B.A. students. All the while, he provided counseling and assistance, showing a propensity to relate to students’ interests and well-being, for which he was affectionately called “Halps,” recalled Fr. Duffy: “Could they have been thinking it’s ‘Halps who helps’?’’”

In 2004, Dr. Halpin led a team of Carroll School undergrads to take part in the Dalhousie University Business Ethics Case Competition to be held in Halifax, Nova Scotia—the first American school that had been invited to participate in the event. The BC entry won.

"As a BC parent and as a friend, I witnessed first-hand Jim Halpin in his role as an advising dean in the Carroll School,” said Robert Frye, a former staff member in the BC Development Office whose son was an advisee of Dr. Halpin. “His commitment and concern for the whole person, the Jesuit concept of cura personalis, was evident to all who saw his interactions with BC students."

In 2007, Dr. Halpin and his Carroll School colleagues were elated at the school’s rise from 23rd to 14th in the Business Week rankings of undergraduate business school programs. A key factor cited in the improvement, according to administrators, was student satisfaction.

Interviewed by The Heights, Dr. Halpin said, "Our networking is outstanding. Faculty members and alumni themselves prepare jobs for students. We are very strong in Wall Street in terms of alumni. We have good rapport."

Ever mindful of his own formational experiences, Dr. Halpin believed business and management education benefits from exposure to the liberal arts tradition, as he told The Heights in 2010, two years before he retired.

“Liberal arts develops critical thinking abilities in a way business education does not. Whereas majors in business provide for career preparation, courses in the arts and sciences aid in personal development and thinking. If space in a schedule allows, I always encourage CSOM students to consider a second major or minor in a liberal arts field. There are just a multitude of benefits with the study of liberal arts that can assist one not only in their career, but in life.”

Dr. Halpin was predeceased by his brothers, Thomas and Jackie Halpin, and his sister, Mary Halpin Ignacio.

In lieu of flowers, contributions may be made to the Jesuit Refugee Service/USA.