Artist Ken Packie with his finished sculpture of the Holy Family. Photos by Lee Pellegrini.

A centuries-old oak tree on the edge of Boston College’s Brighton Campus was removed this past spring due to failing health—but rather than disappear altogether, its trunk has undergone an unusual transformation.

Ken Packie, a Massachusetts artist who specializes in wood sculptures, was commissioned by the University to carve the tree’s nearly six-foot-wide base into a three-dimensional portrayal of the Holy Family, celebrating Boston College’s Jesuit Catholic heritage and recognizing the historical significance of the Brighton Campus.

The new sculpture, which Packie completed in July, is now visible from Commonwealth Avenue as motorists and pedestrians approach the McMullen Museum of Art. (Those who continue into Newton will be treated to another of Packie’s creations: a marathon runner carved from a dying maple tree.) It took Packie just over a month to create the sculpture, which he said was the most challenging assignment of his career.

“It’s probably the most ambitious thing I’ve tried, because it’s the human form, and everything about this subject matter is so important,” he said. “I’m not trying just to emulate the form, I’m trying to think about what it means to everybody.”

For Landscape Planning Director Regina Bellavia, whose team maintains roughly 4,600 trees across the University’s three campuses, preserving the oak’s memory through art is a fitting tribute. She estimates that the tree was around 200 years old when it was taken down, making it older than the buildings and roadways surrounding it.

“I could imagine, historically, before they cut Commonwealth Avenue through, there were probably many more of these oak trees, and this one happened to survive,” she said. “I’m grateful we were able to witness it for as long as we did.”

Bellavia had been tracking the oak tree’s declining health for nearly a decade, consulting with arborists and taking steps to extend its longevity without risking the safety of people walking and driving nearby. Six years ago, the tree’s canopy was cut back significantly to reduce strain on its trunk, after a resistograph test revealed high levels of decaying wood. In the years since, Bellavia noticed carpenter ants alongside the back of the tree, where the bark had long since fallen off. 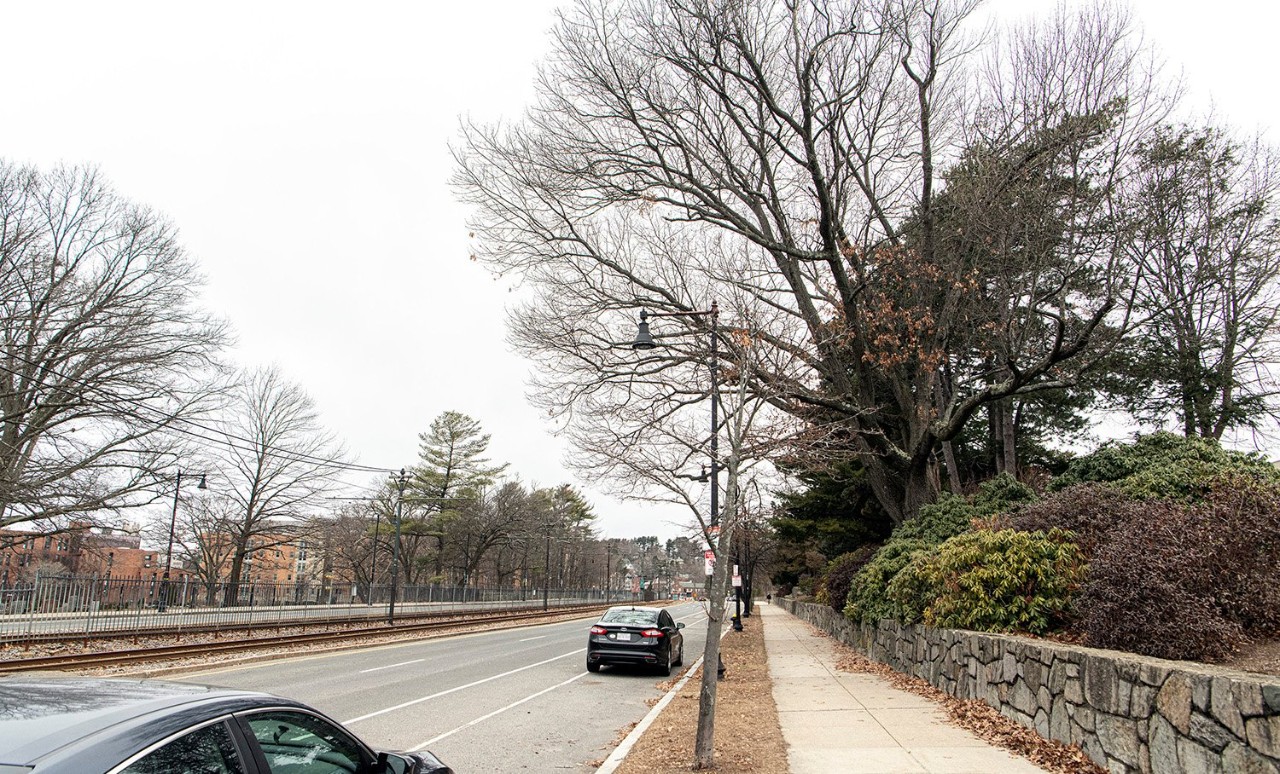 In its declining state, arborists feared the centuries-old oak tree could fall directly into Commonwealth Avenue.

Last November, a second arborist recommended that the tree be removed due to the “significant amount of dead trunk area and potential for future failure.” If it fell, the tree would have crashed directly into Commonwealth Avenue, posing a risk to cars, pedestrians, and subway riders.

“No one ever wants to take down a tree this big, but they are living things so they have a lifespan,” said Bellavia. “We decided it was time.”

Once the canopy was removed, Packie began work transforming the trunk into a work of art. To create his pieces, many of which are inspired by nature, he uses only three tools: a chainsaw, chisel, and blowtorch. As an added challenge, when Packie began carving, he discovered extensive rot within the stump, requiring him to replace sections of wood as he worked.

In late July, Packie gave the sculpture a final coat of protective varnish before taking down his scaffolding and preparing to move on to his next project. With every commission, he takes joy in watching his subjects emerge from wood.

“It’s an evolution as the piece unfolds,” he explained. “[I’m] taking something that was alive and giving it a second life in a different form.”

From tree stump to work of art