Five years ago, Duncan Walker ’13 was working 14-hour days as the cofounder of consumer data startup Jebbit. Now, as the University’s newest entrepreneur-in-residence, he’s helping current students navigate the ins and outs of starting and growing a business.

In February, Walker began holding weekly office hours at the Edmund H. Shea Center for Entrepreneurship, where BC students can pick his brain on everything from business concepts to customer strategy.

“There truly is no better time to start a company than when you’re at university,” said Walker, who is originally from the United Kingdom. “You have so many resources, so much support. When I talk to students, I’m constantly trying to reinforce that, telling them to make the most of every day.”

Walker’s own foray into entrepreneurship began during his junior year, when a friend came to him with an idea for a menswear startup that needed a website. Despite having no previous experience in software development, Walker agreed to build the ecommerce site and taught himself to code.

“I learned by sitting in my dorm room, day and night, just Googling question after question trying to figure it out,” he recalled. “I posted on the BC class Facebook pages, ‘Hey, I’m trying to teach  myself how to code. If you have something you’d like me to build, let me know; just understand it’s going to be really crap because I have no idea what I’m doing.”

To his surprise, the post resulted in multiple responses, including one from classmate Tom Coburn ’13 with an idea for a business that would ultimately become Jebbit.

While he describes his introduction to Jebbit as “serendipitous,” looking back, Walker can identify specific attitudes and behaviors that contributed to his success. Those traits—initiative, adaptability, resilience, and self-awareness—make up half of what he’s labeled the “2M approach” to entrepreneurship.

“It’s a method and a mindset,” he said. “You look at most accelerator programs and they’re focused on the method, the process of building a business, but the mindset is what really makes a difference when you’re trying to be successful in the real world.” 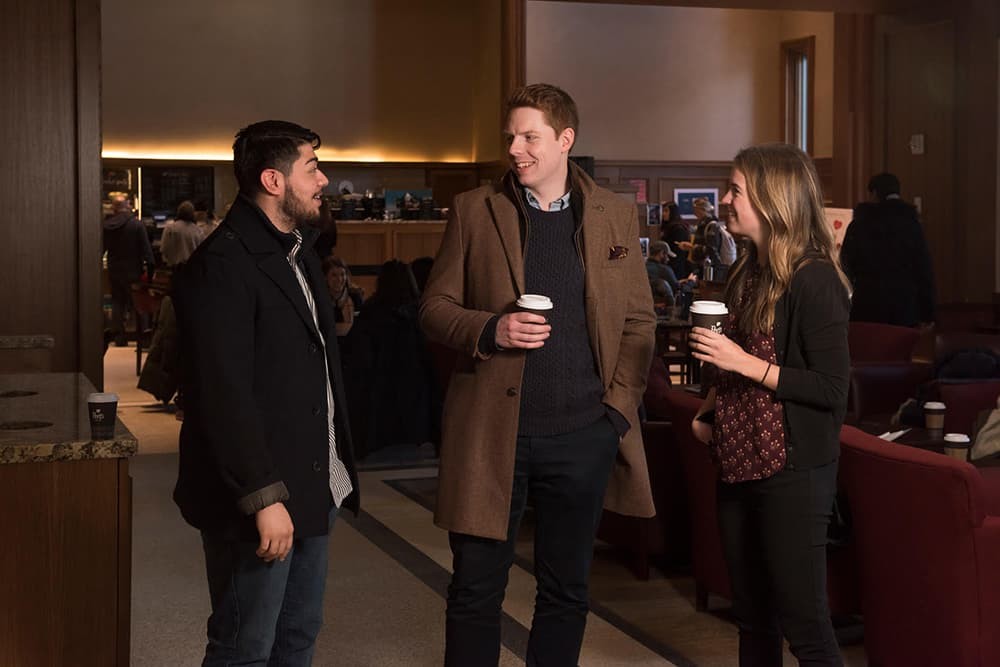 The early days of Jebbit were anything but glamorous, he said, especially when the team of co-founders, all BC students, graduated and suddenly found themselves responsible for their own survival. Still, crammed into a house with 12 other young people, Walker felt more fulfilled than ever before.

“It was the time of our lives,” he recalled. “We just felt so empowered, passionate, and excited about what we were doing.”

With financial backing from alumni entrepreneurs and mentoring support from Carroll School of Management Associate Professor of Information Systems John Gallaugher, the Jebbit team honed its product and found success as a platform helping consumers and brands share data in a more open and trustworthy way. The company now employs 55 people and is headquartered in Boston’s Innovation District. Walker is Jebbit’s Vice President of Research and Development.

In his new role at the Shea Center, Walker hopes to expand the University’s network of alumni entrepreneurs to accelerate the growth of dorm room startups operating at BC. In many ways, it’s a continuation of the work he’s been doing as managing director of SSC Venture Partners, a startup accelerator and venture fund created by BC alumni to support students’ entrepreneurial projects.

Walker’s dual experience as an entrepreneur and mentor is what prompted Shea Center Executive Director Jere Doyle ’87, P’15 to bring him on board.

“He’s walked the walk and understands all the things that it takes to build a successful business,” Doyle said. “He'll be able to connect with our students and relate to them in a very unique way.”

Walker retains fond memories of his three years at BC. Originally enrolled at Durham University in England, he arrived at the Heights as a sophomore exchange student and later applied for regular admission. The process wasn’t easy, but Walker sensed that his experience at BC would be life-changing. He wasn’t wrong.

“Whether it’s the things I did really well or the things I didn’t do well, I think back on BC as the time that has enabled me to do everything I’ve done since and everything I will do in the future,” he said. “It completely changed my outlook on the world.”