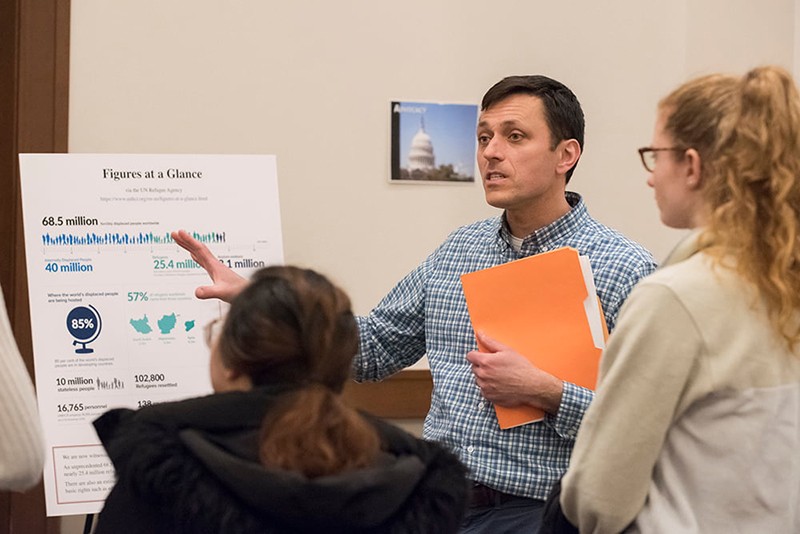 Seeking to spark awareness of the hardships of refugees, the Boston College Center for Human Rights and International Justice invited members of the University community to reflect on what it would be like to live as one.

The center held an event on April 1 in the Corcoran Center Heights Room, “Rights and Resources in Refugee Camps,” that offered insights into how a refugee camp typically provides for residents’ basic needs. Attendees were given a card that listed a fictional refugee’s name, country of origin, country of relocation, and a brief quote from him or her, and were asked to think of this individual as they walked through the various information stations and learned about the conditions refugees endure.

“The world has the greatest number of forcibly displaced people at any time since World War II, according to UN data,” said Timothy Karcz, the center’s assistant director. “We feel it is important that students at an institution such as BC, with its social justice-oriented mission, are aware of this issue as oftentimes refugees’ plight can suffer from the ‘out of sight, out of mind’ phenomenon.”

Members of BC student groups manned stations representing basic needs such as water, shelter, education, and sanitation, and shared data on the lack of a particular necessity and its impact on the lives of refugees in camps. At the water station, members of BC Charity: Water—which strives to deepen understanding of the global water crisis while raising money to build water systems in developing countries—displayed the amount of water a person living in a refugee camp is allotted each day, which is less than the amount used during an average shower.

“What’s the first thing I do in the morning? Usually, I wash my face, brush my teeth, or take a sip of water,” said BC Charity: Water member Ellie Rueve ’21. “Knowing how much water we use every day, it shocked me to learn that some people don’t have it.”

Another station offered information on opportunities for advocacy on behalf of refugees.

“Advocacy is something I am very passionate about,” said Stephanie Madzey ’19, who manned the table. “I studied abroad in Jordan and my program was based on refugees’ health and humanitarian action. Since then, issues related to refugees have become very important to me. We definitely need to keep learning, but we also need to do something about it.”

Other student groups contributing to “Rights and Resources in Refugee Camps” included GlobeMed at Boston College, BC Model UN, Arrupe International, and BC Real Food.