Linda J. Riley, executive director of Auxiliary Services and a 45-year BC employee who made extensive contributions to the University through varied positions in Residence Life and Auxiliary Services retired from her full-time position in December. 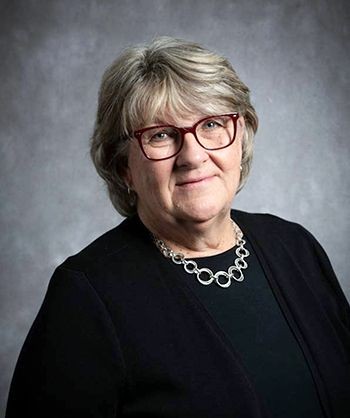 Patricia Bando, associate vice president for Auxiliary Services, and Riley’s colleague for 16 years, characterized her as a person who truly demonstrates that BC is not just a campus community, but a family.

“Linda was so highly respected because of her history of demonstrating care and fairness and her industry knowledge when working with our colleagues,” she said. “I’m grateful to Linda for her dedication and managerial leadership; her creative, tactical and strategic thinking skills; and her mentoring expertise, which has enabled our Auxiliary Services team to raise our benchmark goals over the years and surpass customer expectations.”

Riley began her professional life at BC as a career advisor following graduation from the University in 1976. In 1981 she joined University Housing (now Residential Life) as an administrator, and from 1985-2005 rose to the position of assistant director of housing and associate director of operations and financial management, including a period as acting co-director of residential life.

In 2005, the Waban resident was appointed executive director for Business Services within the recently established Auxiliary Services division, the now-nine department unit that provides critical goods and services to the entire BC community.

As Bando explained, there was no “honeymoon period” following the launch of Auxiliary Services—a demanding and university-wide enterprise even in its infancy that now includes management of a retreat center, print services, transportation and parking, the BC Bookstores, and later, the Bureau of Conferences (now Event Management). The goal was and continues to be self-sustainment for each cost center.

“Linda’s high degree of experience in management and supervision of operations, personnel management, financial planning and management, facility maintenance and renovation in her role in Residence Life were assets that proved to be invaluable for the success of our programs in Auxiliary Services,” said Bando. “She and I built the division from scratch. She has been a devoted and skilled partner along the entire way.”

Additionally, in August of 2008, Riley was named University harassment counselor, which entails advising all parties in cases of alleged sexual, racial or other harassment on the job or in the classroom.

At the time of her counseling appointment, then-Human Resources Vice President Leo V. Sullivan M.Ed.'80, H '21, noted that Riley was “an excellent choice as counselor who possessed the presence, judgment, and wisdom to deal with the various issues involved.”

Riley has simultaneously served in that role along with her Auxiliary Services executive position for 13 years, and she will continue to operate in that capacity until June of 2022, according to Vice President for Human Resources, David Trainor.

“Although Linda has retired from her primary duties in Auxiliary Services, she has agreed to remain the University’s harassment counselor through June to assist us with that transition,” said Trainor.  “I’m very grateful that she will support us with this important role for the remainder of the academic year.

“Linda has made remarkable contributions to BC over her career. We wish her the very best as she embarks on the next chapter of her life.”

Michael Sacco, executive director of the Center for Student Formation & Office of First Year Experience, lauds his colleague and mentor during his 26 years at BC.

“Linda always took time to explain the various levels of complexity on any given project, and you could be sure that she would teach you as much about the financial implications as well as the related BC history and politics,” said Sacco. “She is a remarkable problem solver; her creativity and fast thinking, combined with her years of wisdom about how BC works, made her an excellent leader, especially in times of crisis.”

Sacco also characterized Riley as a rare manager who could innovate and oversee significant change, while still respecting tradition and culture.

“I don't think most people realize what an enormous impact she has had on Boston College,” said Sacco.  “She has helped shape the campus on which we learn, play, work and live. BC is a much better place because of Linda Riley, and it is hard to imagine the University without her.  She will be sorely missed.”

“My mom inspired me to not only attend BC, but to work here as well,” she said.  “Over her wonderful career, I ‘ve seen how she has made life-long friendships, and made the University more than just her job, but her home and community. Her impact on BC will long outlast her tenure here.

“It's hard to imagine BC without Linda Riley, but anyone who knows her, knows that she'll still attend every football game!