Mother Nature decided to give Facilities Services lead mechanic Michael Franks one last, little send-off ahead of his retirement from Boston College on February 4: a major blizzard that pounded Eastern Massachusetts over the last weekend of January, which meant plenty of overtime for Franks and his coworkers as they kept campus operations running (with an encore of an ice storm on February 4).

But when you’ve worked someplace for 41 years, you tend to take things in stride, whether it’s long hours, rough weather, or assorted aches and pains. On his next-to-last day working the 6 a.m.-2 p.m. shift at the Service Building Garage, Franks contentedly reflected on his four decades at the Heights, where in addition to helping keep the University’s fleet of 150 service vehicles—plus landscaping equipment and the Conte Forum Zamboni machine, among other things—in working order, he was the driving force behind a regular early-morning on-campus hockey scrimmage.

“It was a hard decision to retire,” he said, sitting in his office, where four jump-charging units lined the window sill, a wall calendar sported a photo of a red 1960 BMW 507, and on a nearby shelf sat a table lamp with the figure of an eagle forming part of the base. “I like the job, and I think I still do it well.”

Part of the challenge to doing the job was keeping up to date on the mechanical or technological changes in the service vehicles and other equipment. “But it’s also, of course, a very physical job: lifting 100-pound tires, pushing a heavy machine forward, fixing things in an awkward position,” added Franks, who sustained a significant back injury a few years ago.

Add it all up, he said, and it seemed like the time had finally come to bid farewell to BC—not without regret.

“I’ll miss the people here the most,” said Franks. “You can’t please everybody, obviously, but the people at BC are the best. We do a good job, we work hard, and we do our part to help make BC run.”

Franks may not have been born a mechanic, but he certainly became one early on. As teenagers, he and a friend cultivated a little business fixing bikes for neighborhood kids. He just had a knack for taking things apart, figuring out how they worked, and putting them back together; the more he did it (along with some instruction and training), the better he got, and the more he could do.

“I can fix anything,” he deadpanned, “except a broken heart.”

“I’ll miss the people here the most. You can’t please everybody, obviously, but the people at BC are the best. We do a good job, we work hard, and we do our part to help make BC run.”

Forty-one years ago, Franks had a very different, and quite urgent, fix-it situation. He and his wife Debi had only recently welcomed the first of their three daughters when the car repair shop where he’d been working let him go. Fortunately, there was a place nearby that held the promise of jobs with health insurance and other benefits to support a growing family: Boston College, “a five-minute commute from my house,” he said.

Applying for a housekeeping job, he recalled, “they told me I was over-qualified.” But Facilities Services administrator Don McGuinness saw Franks as an ideal fit for the third mechanic slot. His four decade-stint at BC was underway.

Franks had been at the University for several years when he got the idea for what would become an ongoing BC community activity, one that involved his other passion. Franks had played hockey throughout his youth, even attending the instructional camp in Ontario run by Boston Bruins legend Bobby Orr, and still loved the game. Why not, he thought, start a regular “morning skate” in the McHugh Forum, which at the time was home to BC hockey?

The Athletic Association was amenable to the idea (“I had an ace-in-the-hole: I was the one who fixed the Zamboni machine,” said Franks), and before long the morning skate sessions were drawing upwards of 30 participants. Among them was a slender, middle-aged Jesuit named J. Donald Monan, S.J., who happened to be the president of Boston College. 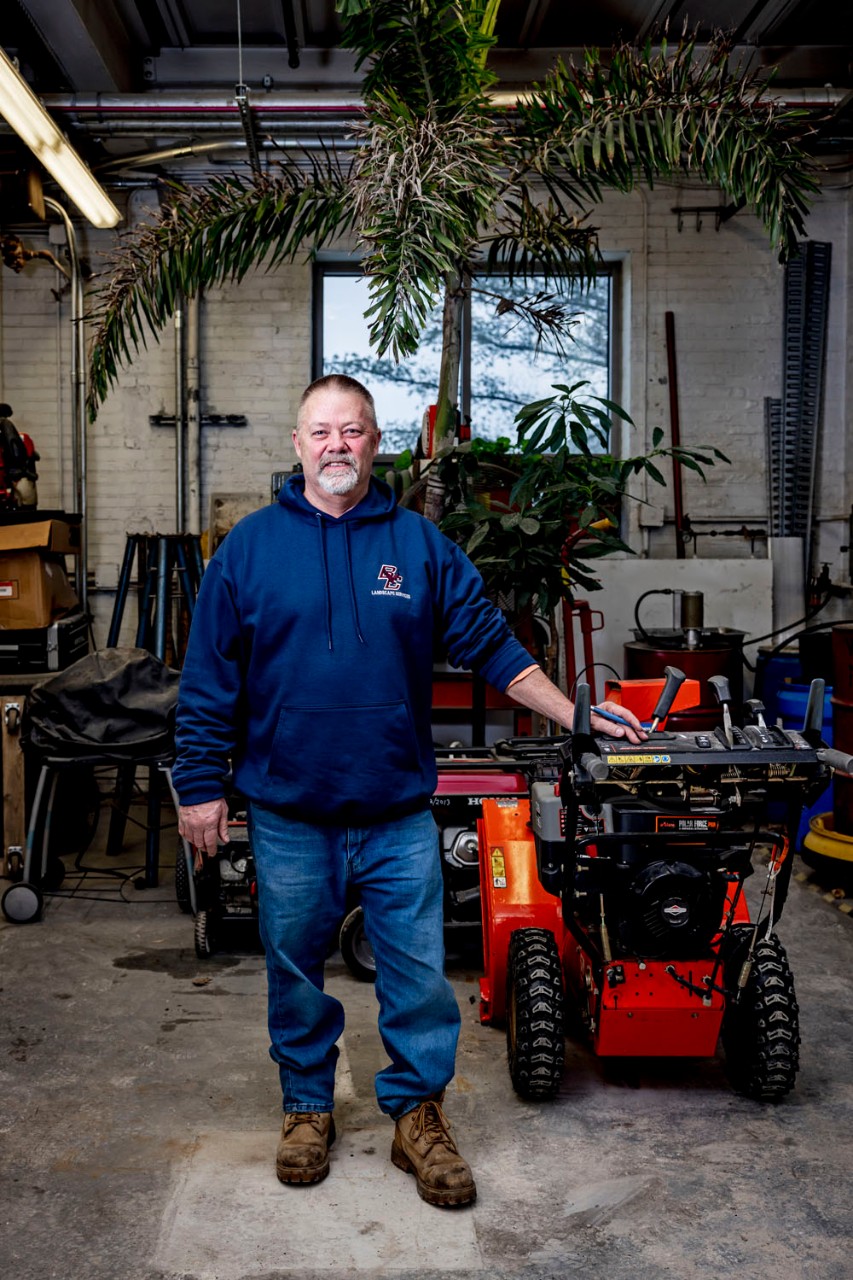 “Fr. Monan was great to have around. He absolutely loved to skate,” said Franks, who recalled a warm encounter with Fr. Monan—by then retired as president—at the 2001 Frozen Four tournament in Albany, NY, where BC won the national championship.

Another regular at the skate, which continued when the Conte Form Kelley Rink replaced McHugh, was Ferris Professor of Physics Michael Naughton, who had played hockey as a student at St. John Fisher College in western New York. Naughton’s introduction to the Kelley Rink session, and to Franks, was a memorable one, and he learned why Franks—whose position was defenseman—had earned the nickname “The Wall.”

“I was trying a little too hard,” said Naughton, “so Mike brought me down to earth.”

“I gave Mike a bit of a wake-up call,” confirmed Franks with a smile.

It was, however, all meant in good, competitive fun, and the two Mikes became fast friends.

“Mike is one of those people I hope BC never runs out of,” said Naughton. “He’s been a solid part of the institution, someone who seemed to know everybody—a universal person who doesn’t bother about status. Those are the people you want to have around.”

Another aspect of his BC career Franks valued was getting to know the students who worked part-time in Facilities Services. “I had parents who told me that their kid learned so much from me that it was like an extension of their classes,” he said. “I was just glad to do whatever I could to make their time at BC a good one.”

Franks’ immediate post-BC plans include travel: He and Debi were set to take off to Cancun right after his last day, and are weighing a trip to Italy in the summer. A repairman can never truly retire, he acknowledges, so he expects to have a project or two come his way. He envisions a house on Cape Cod, maybe another in Florida—both with a detached garage so that he has plenty of space for tinkering. Most importantly, he also has six grandchildren (enough to field a hockey team), and looks forward to spending time with them.

As he mused on the future, the present interrupted: “Hello?” a voice reverberated through the garage. “Can someone help me?” Franks went off to see what was going on, and returned several minutes later.

“A handicapped van’s having some problems with its door,” he said, looking through his tools until he found the one needed, and went out to make yet another repair.