"As welcoming a presence for BC as Gasson Hall"

J. Joseph Burns has a classic sports metaphor to describe his 36-year career at Boston College: “I’ve been like a utility player in baseball,” chuckled Burns during a recent conversation. “Whatever position they needed me to play, there I went.”

But one colleague uses a different, and more complimentary, sporting phrase to sum up Burns’ tenure at BC.

“Joe is a team player, a very humble, kind person,” said Michael Davidson, S.J., director of the Thea Bowman AHANA and Intercultural Center. “You bring him a suggestion, and if it’s for the betterment of a student, he’s on board. There’s been no task too high, or too low, for him.” 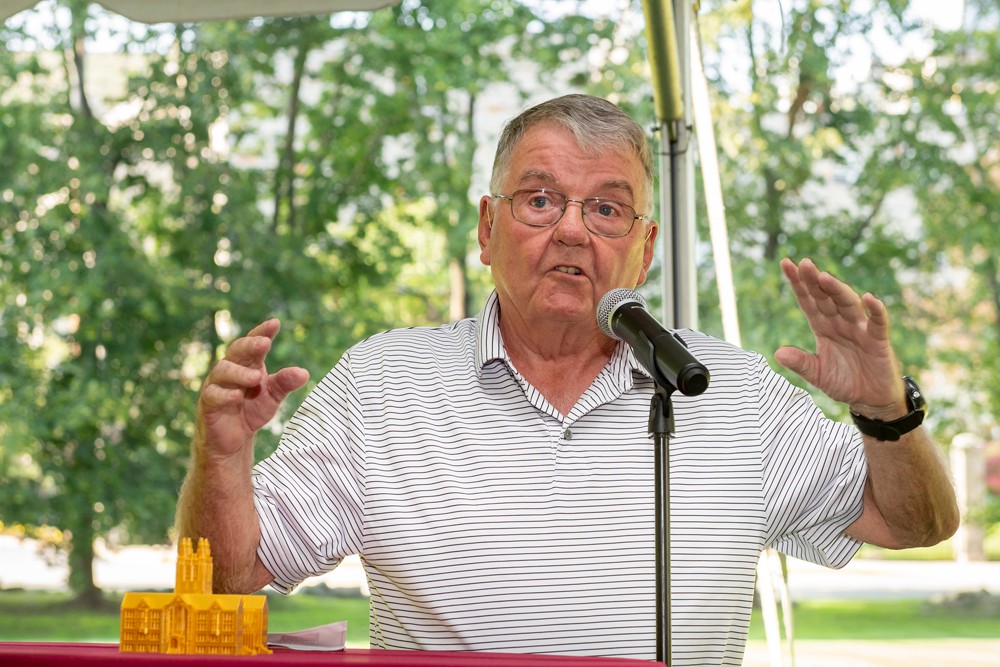 Joe Burns addressing attendees at an August 12 retirement event in his honor. Beside him is a 3D printed replica of Gasson Hall. (Justin Knight)

Burns, a 1967 alumnus who also graduated from Boston College High School, formally retired from BC this summer, more than three decades after returning to the Heights as an administrator. His full-time, official positions at BC were associate dean of the College of Arts and Sciences (1985-1998) and associate vice provost for undergraduate academic affairs, but Burns’ tenure included numerous other jobs and undertakings, among them acting director of the University’s Pre-Health Program and BC’s Learning Resources for Student Athletes office; member/chair of the committees for the Martin Luther King Jr. and the Benigno and Corazon Aquino scholarships; and Athletic Advisory Board member.

He also oversaw a major Carnegie Corp.-funded initiative, “Teachers for a New Era,”  that involved a collaboration between A&S and the Lynch School of Education; led undergraduate program assessment efforts; spearheaded the creation of the Commencement Day processional; helped establish the Academic Advising Center; and was BC’s delegate to the New England Association of Schools and Colleges accrediting body. In 2006, Burns received the Mary Kaye Waldron Award, which honors administrators, faculty, and staff members who have had a positive impact on student life at Boston College.

Burns’ ties to BC go beyond employee and alumnus: His father, J. Joseph Burns, M.D., was the University's first director of student health, long-time chief physician for the athletic program, and a member of the BC Athletic Hall of Fame; and his sons, Dan ’03 and Chris ’04, are both graduates. All these perspectives provided Burns with broad and deep insights into BC’s academic, formational, and spiritual elements, which he shares in the History of Boston College course he developed and taught for the Capstone program. But appreciative as he is of its past, colleagues say, Burns played a key role in helping the University move to the future.

“Over nearly 40 years of dedicated service to his students and his faculty and staff colleagues, Joe has befriended generations of the Boston College family and left his mark in academic affairs and well beyond,” said Provost and Dean of Faculties David Quigley. “ I wish him a joyous retirement and thank him for all that he's done for BC.”

Explaining his decision to retire, Burns said his enthusiasm for working at BC was by no means on the wane. “I loved what I was doing. But I thought about everything that’s happened the last couple of years with the pandemic, and now that BC is essentially starting over, I just felt this was the right time to step away.”

“Joe is a team player, a very humble, kind person. You bring him a suggestion, and if it’s for the betterment of a student, he’s on board. There’s been no task too high, or too low, for him.”

As a BC undergrad commuting from home,  Burns majored in chemistry for two years before switching to sociology—a fairly new academic discipline at the time—and flourished under the tutelage of faculty members like John Donovan, Severyn Bruyn, and Ritchie Lowry. After graduating, Burns joined the Peace Corps, eager to see more of the world and learn about other cultures. He spent two years in the Philippines working on, among other things, rice-growing (“I don’t think you find too many sociology majors who had to take a course on growing rice”) while making friendships that endure to this day.

But Burns had an eye-opening moment in a group discussion during Peace Corps training: He was speaking about some close friends in his old Boston neighborhood, when another volunteer asked, “Do you have any friends who aren’t Irish?”

“That really hit me,” said Burns. “I realized how small a world I’d been living in—I loved it, of course, but I knew then how important it was to get to know people whose backgrounds and experiences are different than yours. I feel that lesson has stayed with me.”

After earning graduate degrees in sociology at Yale University, Burns accepted a faculty post at Princeton University in 1975. Teaching at an Ivy League college might seem an enviable landing place, but Burns found himself growing more interested in the administrative domain, especially where there were opportunities to engage students outside of the classroom. In 1983, he was appointed as director of studies at Princeton’s Woodrow Wilson College (now the First College), which appealed more to his evolving career path.

Still, Burns wasn’t quite satisfied. “Princeton was wonderful. The quality of education, the standards they held for the students—all of that was very impressive to me. But it never really felt like ‘my place.’ In the back of my mind, I always thought how nice it would be to return to BC.”

In 1985, he got his wish, accepting the position of A&S associate dean. “From the beginning, I wanted to see how different aspects of the University operated,” said Burns. “I was very fortunate to have that chance. I enjoyed getting a better understanding of the great work done by Learning Resources for Student Athletes [now the Office of Student-Athlete Academic Services], for example, and—through ‘Teachers for a New Era’—learning more about K-12 education and the Lynch School.”

One of his earliest, and most rewarding, BC affiliations was with the MLK Memorial Committee, which supports and sponsors programs—including an  annual scholarship—that promote King’s ideals of social justice and equality and focus on issues of importance to the African American
community, at BC and beyond. He later served on, and chaired, the committee for the Aquino Scholarship, which honors student contributions to the Asian American community.

At a time when BC was building a national—and increasingly international—profile, said Burns, committees and initiatives such as these underscored the importance of recognizing the needs of a considerably more diverse university. While not  necessarily comparable to the experience of an AHANA student, Burns, as  an American in Southeast Asia and an Irish Catholic at an Ivy League  college, knew something of feeling like an outsider.

“It was  clear that BC had to help support students making the transition from  other cultures to life at the Heights,” he said. “We’ve seen many AHANA  students achieve great things at BC, and the MLK and Aquino scholarships are an indication of that. I’m happy to have played a role in both.”

“When you talk about someone who wants AHANA students to succeed, Joe is that person,” said Fr. Davidson, who worked with Burns on the MLK Committee.  “He is very conscious of the challenges that face students from underrepresented communities who enter higher education. To me, Joe has
been as much of a welcoming presence for BC as Gasson Hall.”

Burns can tick off other changes at BC during his time—its growth as a research institution and an increased emphasis on art on campus and in the curriculum, to name two—but one constant has been the University’s Jesuit character.

“The Jesuits have shown continuing commitment  to BC in so many ways,” said Burns, noting that the MLK, Aquino, and Archbishop Romero scholarships all started with grants from the BC  Jesuit Community. “BC’s Jesuit core remains solid and strong,  particularly its emphasis on reflection. Our students get to examine the Jesuit ideal, which is at the heart of BC’s formational mission and  guides what we do not only in the classroom but in the residence halls  and other areas of campus life.”

Burns won’t be completely  absent from campus: He plans to teach History of Boston College next  spring, stay in touch with the Pre-Med Committee, and remain active in  the Cornerstone Seminars program for first-year students. It would be  difficult, he admits, to not be around a community that’s meant so much to him.

“There are so many people I’ve loved working with over the years: Jesuits, administrators, faculty, staff, graduate and  undergraduate students, alumni. And what they’ve all had in common is  their commitment to making a difference, for BC and its students.”