The ends of the earth

Will Smith, Volcanologist Dr. Jeff Johnson, and Erik Weihenmayer on the set of "Welcome to Earth." Photos by Skyler Williams.

Sitting in the backseat of a four-wheel-drive vehicle speeding towards one of the most active volcanoes on earth, Erik Weihenmayer ’91, H’03 and Academy Award-nominated actor Will Smith made a surprising discovery.

“We found out I was exactly two days older than him,” said Weihenmayer, who turned 53 last September, like Smith. “I joked that I’m so much more mature than him. Those two days really taught me a lot.”

The scene, captured by cameras, appears in the opening minutes of National Geographic’s new series "Welcome to Earth", which debuted on the streaming platform Disney+ in December. Its six episodes follow Smith—who admits to never having slept in a tent or swum in a lake—on a tour of some of the planet’s most remarkable (and remote) locations, from glacial crevasses in Iceland to underwater caves in Namibia. 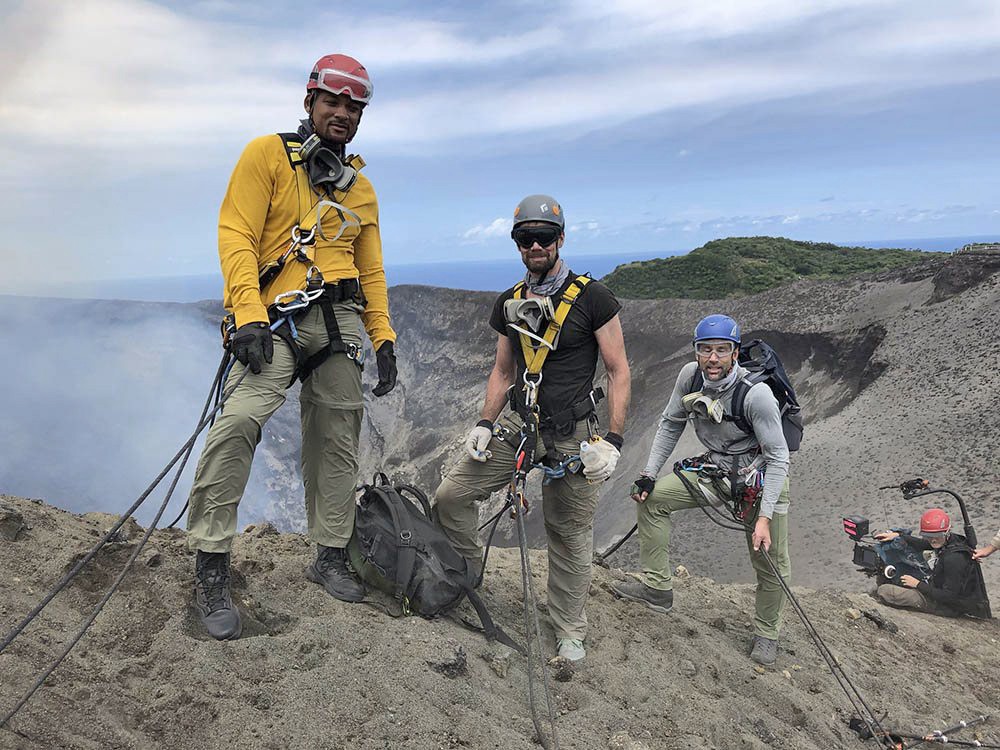 Filming at Mount Yasur was "the most intense thing I've ever experienced," said Weihenmayer. "Will and I stood at the rim and listened to those [magma] bombs exploding, the size of cars."

Joining him (and joking with him) along the way are professional explorers like Weihenmayer, who has made a career out of experiencing the outdoors, despite losing his vision at the age of 14. In the show’s first episode, Weihenmayer and Smith hike to the rim of Mount Yasur, an active volcano in the South Pacific, and then rappel into the crater, helping researcher Jeff Johnson install sound equipment to help predict future eruptions.

“It sounds like the beginning of a really bad joke: a rapper, a blind guy, and a volcanologist rappel into a volcano,” says a nervous Smith, as boulder-sized globs of molten lava shoot into the air behind them.

Filming in extreme conditions was old hat for Weihenmayer, who has appeared in dozens of films and TV shows since becoming the first blind person to reach the summit of Mount Everest in 2001. But unlike the 2018 film Weight of Water, inspired by his solo kayak of the Grand Canyon, "Welcome to Earth" was made to educate as well as inspire.

“I loved the idea that this was a science-based show,” said Weihenmayer. “It wasn’t about people’s egos, going out and conquering a mountain for the sake of doing it, which I’ve done a million times. It was in pursuit of science and learning.”

An educator at heart

Education has always been of interest to Weihenmayer, who taught middle school math and English for six years after graduating from Boston College in 1991 with a bachelor's degree in English and communication. In those days, he satisfied his urge to climb on weekends and during summer vacations, scaling El Capitan in Yosemite National Park and Denali, the highest peak in North America. When teaching began to get in the way of his climbing schedule, Weihenmayer made a career change that even he admits was risky.

“How the heck is a blind guy going to climb mountains and make a life?” he recalled thinking. “Is that a joke?”

In 2001, Weihenmayer’s history-making Everest ascent landed him on the cover of TIME magazine, beside the headline “Blind Faith.” Over the next seven years, he completed the Seven Summits, joining an elite group of mountaineers who have climbed the highest point on every continent. As his story attracted attention, Weihenmayer received endorsements and added professional speaker to his resume (he delivered the Commencement address at Boston College in 2003, and received an honorary degree), then published author. In 2005, he co-founded the organization No Barriers, offering a range of outdoor programming and retreats to help people of all backgrounds and abilities overcome challenges.

Looking back, “it’s been crazy, the good fortune that I’ve had,” he said. “I’ve had some bad fortune too, of course, but so much good.”

A sense of connection

Weihenmayer met Smith for the first time on the set of "Welcome to Earth" and spent a week getting to know the Independence Day star, whom he described as a “normal guy” who, unlike the characters he portrays on screen, has “never really seen the world.” 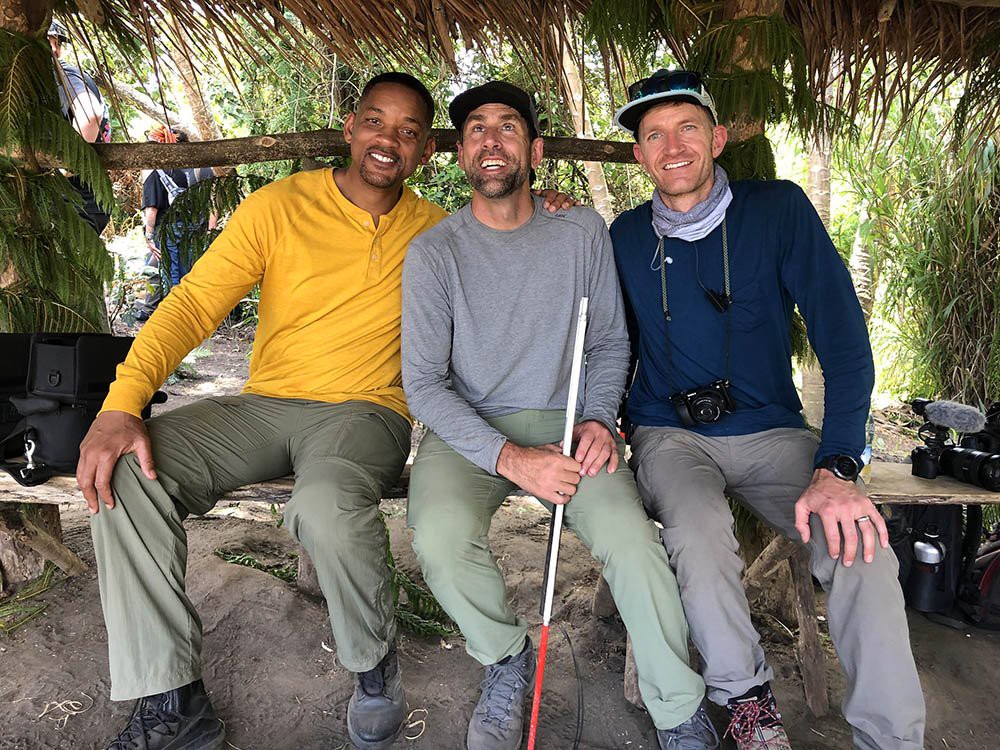 Smith, Weihenmayer, and Skyler Williams of Touch the Top, Inc. "I told him at one point, 'You could totally hang on one of my climbing teams,' because he was really easy to get along with," said Weihenmayer of the famous actor.

“He’s been saving the world repeatedly in movies but he’ll fully admit that’s a branded image,” said Weihenmayer. “I asked him on a car ride somewhere, ‘What’s harder, this or films?’ and he said, ‘This is way harder. This is the real me.’”

In the series’ fourth episode, Weihenmayer leads Smith on a three-day packrafting trip in Alaska. Grizzly bears wade casually nearby, attracted to the salmon-packed water. Unlike the first episode, which focuses on sound, the Alaskan segment explores the power of scent and the interconnectedness that exists within ecosystems, which allow the salmon to travel hundreds of miles back to their home river to spawn.

Even as a seasoned outdoorsman, Weihenmayer recalls being “blown away” by the episode, a reminder, he thinks, that everyone can benefit from getting out of their comfort zones and taking a closer look at the world around them.

“We all feel a little bit disconnected from Earth sometimes,” he said. “I hope for kids especially, even if they don’t have a rainforest or a volcano to explore, they can climb over their fence, go build a dam, climb a tree, and develop their own creativity, their own imagination, and their own sense of exploration. I think that’s really important.”

Erik Weihenmayer kicks off 11th season of BC Agape Latte