"We are meant to go into the unknown." This is the mantra of 2020-21 Monan Professor in Theatre Arts Paula Plum, a phrase given to her by her teachers, and it is serving her well this semester as she directs a challenging and unconventional Boston College production of William Shakespeare's "Twelfth Night."

Plum's reimagining of the classic Shakespearean comedy will be presented as a film during November 19-22 through a private YouTube link accessible via the Robsham Theater Arts Center website.

"This journey has certainly been an opportunity to test our resilience, creativity, and resourcefulness," said Plum of the production. Compelled by the pandemic to pivot from a traditional stage production, Plum-an accomplished and acclaimed actor, writer, acting coach, teacher, and director-might have chosen to use the Zoom format, but had a good reason not to, she explained.

"Since the beginning of the pandemic I have spent endless hours every day, like the rest of the country, on Zoom. I am Zoomed out! I felt a great need to tell this story using a different platform, hoping that my film background, as an actor, would benefit my cast." 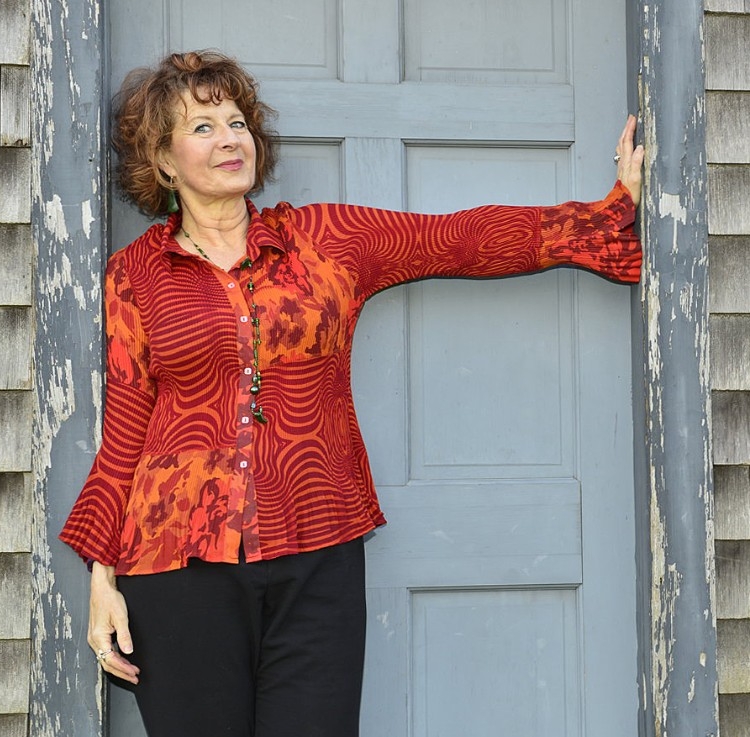 Plum has high praise for her Boston College cast and entire production team.

"I am so impressed with the level of commitment to the work and the advanced training and ability of the students, both in my class [The Actor and the Mask] and in the cast of 'Twelfth Night.' It has been a truly challenging journey during this pandemic, and they have met extraordinary challenges with grace and courage. The stage management team especially has executed a safety protocol that has kept us all healthy and able to continue our rigorous rehearsal schedule. We are all grateful to them for daily careful preparation of the set and props. They are top-notch professionals."

Plum is an award-winning actor with more than four decades of teaching experience that includes the "Shakespeare Work Out" for Actors Shakespeare Project, a six-week acting intensive program that focuses on voice, body, and breath. She is a founding member, resident, and teaching artist of ASP, a Boston theater company that "performs and works in found spaces, schools, and theaters to present and explore the robust language, resonant stories, and deeply human characters in Shakespeare's plays."

For her wide body of stage credits, she has won four Independent Reviewers of New England Awards for Best Actress ("Wit," "Miss Price," "The Heiress," and "Plum Pudding") and three Elliot Norton Awards for Best Actress ("Who's Afraid of Virginia Woolf," "Lost in Yonkers," and "Miss Witherspoon"). Plum also was selected by the Boston Theater Critics Association to receive the 2004 Elliot Norton Award for Sustained Excellence, which pays tribute to the recipient's body of work and their "outstanding contributions to theater in Boston."

In 2009, Plum was one of five actors nationwide to be awarded a three-year grant from the William and Eva Fox Foundation for a resident actor fellowship at Boston's SpeakEasy Stage Company. She also has numerous directing credits-including as artistic director for the annual "A Christmas Celtic Sojourn" production staged in Boston and elsewhere in New England-and will teach Directing II at BC next semester.

Despite her celebrated professional career and extensive body of work, Plum has found her BC production a very different, sometimes daunting undertaking.

"I have never directed a film and I am learning as I go, along with the cast, how filming a play in front of a green screen works," she said, referring to the backdrop used in making composite images for film and TV productions. "They have been generous with my learning curve."

That learning experience, she added, has been significant for all involved in the production. "We have learned how to be patient with each other and how to protect each other. We have had to 'socially distance' every moment of the play. The team has gone to extraordinary lengths so that we remain healthy. Jackie Dalley [associate professor of the practice of theatre], our brilliant costume designer, created masks to match each costume."

Stage Manager Ally Lardner, a BC senior, concurred. "Thanks to the support of the crew, creativity of the production team, and the endless talent and flexibility of the cast, we've been able to come together safely on a stage and create something unprecedented in the most unprecedented of times."

It is important, Plum added, to embrace nontraditional means of presenting theater productions such as 'Twelfth Night'.

"The goal is to tell the story, and theater people will find the means. For the 'Twelfth Night' audience, I hope that what sings out is the spirit behind the production: that, despite the odds, we have managed to make something beautiful during a time of great crisis and uncertainty."

The Monan Professorship in Theatre Arts was established in 2007 by a gift to Boston College in honor of the late University Chancellor and former President J. Donald Monan, S.J. The position, which also commemorates the late trustee E. Paul Robsham, enables the Theatre Department to bring nationally and internationally known professionals to Boston College to teach and work with undergraduate students.

For more on information on "Twelfth Night," visit bc.edu/theatre.