A prelude to genocide

A new documentary and book from longtime Boston College faculty members John and Susan Michalczyk offer a scholarly investigation of Adolf Hitler’s Mein Kampf as a prelude to genocide.

The Michalczyks have written, directed, and produced the documentary “Hitler’s Mein Kampf: Prelude to the Holocaust.” The film examines how Hitler’s hateful words about Jews, the disabled, and mixed races laid the groundwork for the Shoah. In addition, it offers interpretations of contemporary incidents, such as rallies in Charlottesville in 2017 and Atlanta in 2018, that reflect the rise of anti-Semitism and white supremacy.

“Hitler’s Mein Kampf certainly has overtones of potential genocide, but as we indicate in the documentary, it is only once he comes to power as chancellor in 1933 that he takes significant steps in that direction through propaganda, violence, and the legal system,” said Professor of Film Studies John Michalczyk, director of the University’s Film Studies Program. 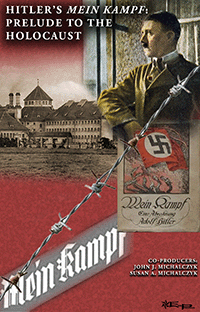 The Michalczyks’ film had its world premiere earlier this year in Germany at the Snowdance Independent Film Festival, not too far from the prison where Hitler wrote Mein Kampf. In late April, the film was screened on campus at a Yom HaShoah (Holocaust Remembrance Day) Commemoration sponsored by the Jewish Studies Program and co-sponsored by the Center for Jewish-Christian Learning, Film Studies Program, German Studies Program, and Music Department.

Clarice Henry of the Landsberger Tagblatt [Landsberg Daily newspaper] wrote of the film: “It may take time, but the work of Susan and John Michalczyk may have laid a significant foundation for a new way of dealing with the subject of National Socialism—and with it, a possibility that such a thing will indeed never happen again. One comes [to the film] with a bias that cannot be dismissed and leaves with hope.”

“We witnessed in the extensive interviews for our documentary the painful and powerful connection between the past and the present,” said Susan Michalczyk, associate professor of the practice in the Morrissey College of Arts and Sciences.

As filmmakers, the Michalczyks have worked on a number of documentaries that focus on issues of discrimination, hatred, human rights, social justice, and conflict resolution in the U.S and places such as Northern Ireland, Germany, the Balkans, Africa, the Middle East, Sicily, and Russia.

“Hitler’s Mein Kampf: Prelude to the Holocaust” was a collaborative project with members of the Boston College community contributing to the filming, editing, musical composition, narration, and translations, according to the Michalczyks. 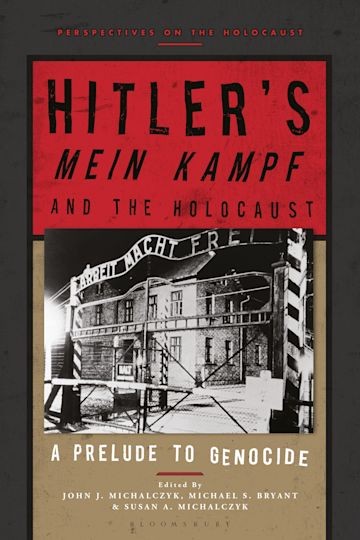 A companion to the documentary is the book, Hitler’s ‘Mein Kampf’ and the Holocaust: A Prelude to Genocide, edited by the Michalczyks and Bryant University Professor Michael S. Bryant. It is the first systematic examination of Mein Kampf with specific focus on the Holocaust.

Divided into three sections—'contexts', 'eugenics' and 'religion'—the book features analyses from leading academics from across the United States, Canada, and Germany. According to the editors, the volume demonstrates how Hitler's autobiographical manifesto describing his views on Marxism, violence, and leadership, as well as his anti-Semitic rhetoric, travels down the disturbing path from a hateful book to the Holocaust.

John Michalczyk wrote the chapter on “Mein Kampf: Race: Blood, and the Holocaust,” in which he spells out how Hitler absorbed the ideas of the late 19th and early 20th century German authors on race as well as American and German writers on eugenics. He explains how Hitler’s writings on “the apocalyptic battle of the Aryan race to maintain its purity against the onslaught of the Jews attempting to infiltrate and destroy it” served as fertile ground from which genocide sprang.

Other BC contributors to the book are Professor of Music Ralf Gawlick and part-time faculty member Barbara Gawlick.

Previously, the state government of Bavaria had held the copyright for Mein Kampf and did not allow any copying or reprinting of the book. Since 2016 when its copyright expired, Mein Kampf has been under greater academic scrutiny, most notably in an annotated critical edition of the work published by Munich’s Institute for Contemporary History. The co-editor of that volume, Othmar Plöckinger, and Magnus Brechtken, deputy director of the Institute for Contemporary History, contributed to the Michalczyks’ film and to the book.

The documentary and book have as their foundation an international conference on the same topic held at Boston College in 2019. The conference featured scholarly presentations on how Hitler's writing on nationalism, expansionism, and anti-Semitism in Mein Kampf led to World War II and the Holocaust. Conference participants were interviewed for the documentary and their presentations were included in the book.

Book: Hitler’s ‘Mein Kampf’ and the Holocaust: A Prelude to Genocide