About the Center on Aging & Work

To promote opportunity, choice, and quality of paid and unpaid work across the lifespan, with a focus on older adults. Through research studies, engagement with a multi-disciplinary network of scholars and practitioners, and efforts to translate research into practice, we bridge the worlds of research and practice.

The Center’s vision and mission align closely with the School of Social Work’s values of individual dignity, respect for diversity, and pursuit of justice. The University’s mission, based in the Catholic, Jesuit tradition, is reflected strongly in our projects as we work to consider the “whole person”—mental, physical, social, and emotional—in the context of vocation across the lifespan.

Since its inception in 2005 through the generous funding of the Alfred P. Sloan Foundation and under the leadership of Dr. Marcie Pitt-Catsouphes (2005-2011) and Dr. Michael Smyer (2005-2008), the Center on Aging & Work at Boston College has put a vital stake in the ground around issues of aging and work. Key accomplishments of the Center include:

Thought Leadership for an Aging Society

The Center has played a critical role in increasing the prominence of aging workforce issues, transforming the topic from a marginal one with few vocal advocates to one that is recognized as central to the overall health of an aging society.

The Center has conducted a wide range of major research studies, including:

The impact of these studies will continue, as the data are archived at the nation’s preeminent social science data center, the Inter‐university Consortium for Political and Social Research (ICPSR) at the University of Michigan.

The Center has produced a variety of databases, tools, and other translational research products that are accessible to a wide variety of stakeholders. Examples include:

In the fall of 2014, the Center experienced another transition as Dr. Marcie Pitt‐Catsouphes stepped down and the major center‐level funding from the Alfred P. Sloan Foundation ended. Since then, the Sloan Foundation has continued to support the development of the Sloan Research Network on Aging & Work, a multi-disciplinary, multi-national network of researchers conducting investigations focused on different aspects of contemporary experiences associated with the phenomenon of “working longer.” In addition, the Center has reorganized around a core team that includes current co‐directors Dr. Jacquelyn James and Dr. Christina Matz; founding director, Dr. Pitt-Catsouphes; and several faculty affiliates, Dr. Kevin Cahill, Dr. Cal Halvorsen, Dr. Rocio Calvo, Dr. Erika Sabbath, and Dr. Joseph Quinn.

The Center on Aging & Work defines workplace flexibility to mean that employees and their supervisors have some choice and control over when, where, how work gets done, and what work tasks are assumed by which employees/work teams.

What about older workers specifically?

Surveys consistently find that a majority (70-80 percent) of workers aged 50 and older state that they expect to continue to work past the traditional retirement age; however, most of these older workers prefer to work in a way that is different from the standard 9-to-5, five-day work week. A 2005 survey of Baby Boomers conducted by Merrill Lynch found that 42 percent said they want to cycle in and out of work, 16 percent want to work part-time, and 13 percent want to start their own businesses. Only 6 percent want to work full-time, and 17 percent said they no longer want to work for pay (with 6 percent expressing other preferences).

Data from the Age & Generations Study suggest that respondents from Generation X and older Baby Boomers were more likely than the rest of the generation groups to say that having access to flexible work options contributes to their success as an employee “to a great extent”.

Is workplace flexibility important to employers?

Workplace flexibility has been widely touted as essential in today’s workplace, having been positively linked to a variety of individual, family, and business outcomes. Data from the Center's Age & Generations Study suggests that having access to the flexibility needed to fulfill work and personal needs was found to be predictive of greater employee engagement, lower perceptions of work overload, better physical health and mental health, and greater satisfaction with work-family balance.

According to the Center’s National Study of Business Strategy and Workforce Development, 55% of respondent employees indicated that their organizations make a connection between workplace flexibility and workplace effectiveness “to a moderate/great extent”. Another study found that greater access to flexible work arrangements was associated with higher life satisfaction, fewer mental health problems, less interference of job and family life, and lower levels of negative spillover from job to home.

What are some examples of workplace flexibility?

There are many different types of flexibility, including, but not limited to the following five broad categories of options:

What are some of the major barriers to using workplace flexibility for employees?

When employees consider whether they should use different types of flexible work options, they tend to think about three basic questions:

What are some of the major barriers to implementing workplace flexibility for employers?

The employers who participated in the Center’s National Study of Business Strategy and Workforce Development offered insights about factors that could make it difficult to implement and/or expand workplace flexibility initiatives. The top five barriers include:

Current status of flexibility in the us workplace

Flexible work arrangements are currently available to varying extents in the U.S. workplace. A recent series of reports from the Center on Aging & Work's Talent Management Study show that the extent to which flexible options are available varies according to industry sector, employer size, and other factors, such as the degree to which employers feel pressure to recruit and retain workers.

For more information about workplace flexibility from the employee’s perspective, check out our Issue Brief “Workplace Flexibility: Findings from the Age & Generations Study" (January 2009).

For more information about workplace flexibility from the employer’s perspective, check out our Research Highlight "National Study of Business Strategy and Workforce Development" (March 2007).

Or for more information about flexibility in general, please visit our publications page.

Employers understand that they have to offer quality jobs to their employees if they want talented people to work for them, rather than for a competitor (Mercer, 2007). The quality of employment is important to employers and their employees.

The Center on Aging & Work’s Quality of Employment Framework focuses on eight specific dimensions that are consistent with components of the employer-of-choice concept.

The interpretation of each of these dimensions of quality employment varies from workplace to workplace. Recognizing this variability, we provide some general descriptions and core elements of each aspect of the quality of employment in the second column of the table below. 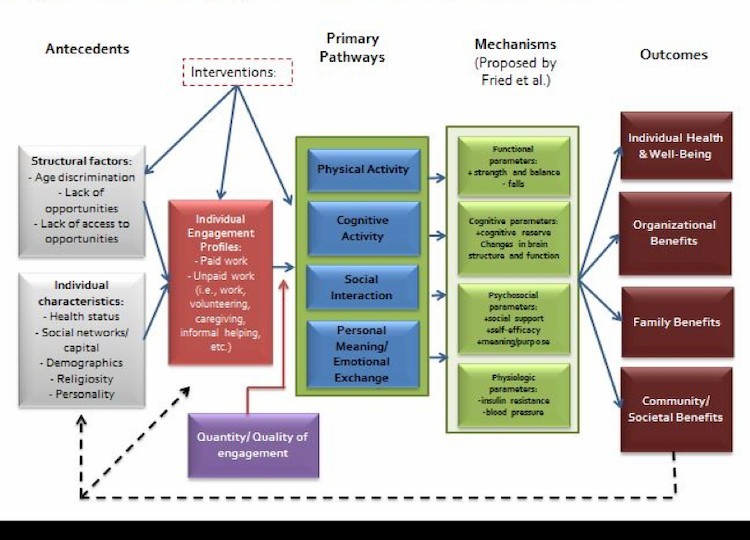 Advancing the national conversation around aging and work will require the efforts of many disciplines, including social work, economics, public health, psychology, occupational therapy, gerontology, and sociology; and stakeholder groups including individuals of all ages, practitioners, for- and not-for-profit organizations, community members, advocates, and policymakers. Indeed, the topic of aging and work is an expansive one, especially when one considers both paid and unpaid work. However, few integrative models or frameworks have attempted to bring together these diverse perspectives. With a new vision and mission, we are well-positioned to occupy this unique space. Our previous conceptual framework was well-suited to paid work, but less so to other forms of productive engagement. The conceptual model depicted below defines our intellectual space and informs our revised vision and mission.

The goals of this model are: