Researchers have discovered a “layer” Hall effect in a solid state chip constructed of antiferromagnetic manganese bismuth telluride, a finding that signals a much sought-after topological Axion insulating state, the team reported in the  journal Nature.

Researchers have been trying to find evidence of a topological Axion insulating (TAI) state and developed some candidate materials based on theoretical calculations. The layered Hall effect represents the first clear experimental evidence of the state, a feature bound by the laws of quantum physics, according to Boston College Assistant Professor of Physics Qiong Ma, a senior researcher on the project, which included 36 scientists from universities in the U.S., Japan, China, Taiwan, Germany, and India. 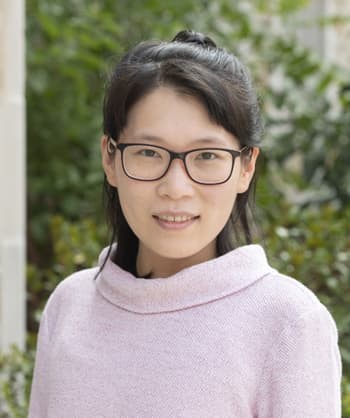 Researchers believe that when it is fully understood, TAI can be used to make semiconductors with potential applications in electronic devices, Ma said. The highly unusual properties of Axions will support a new electromagnetic response called the topological magneto-electric effect, paving the way for realizing ultra-sensitive, ultrafast, and dissipationless sensors, detectors, and memory devices.

At the center of this line of inquiry among physicists and materials scientists are Axions, weakly-interacting particles first postulated by theorists more than 30 years ago, Ma said. They are one of the primary candidates for Dark Matter, a mysterious form of matter thought to account for approximately 85 percent of the universe.

While the search for Axions in high-energy physics is actively on-going, it has been recently proposed that Axions can be realized as quasi-particles in solid state materials. The prime candidate as the place to locate Axions is in a quantum TAI material, where researchers suggest Axions exist as low-energy electronic excitations, Ma said.

“We set out to search for the topological Axion insulating state in a carefully designed quantum device made of even-number-layered MnBi2Te4—or manganese bismuth telluride,” Ma said. “Previous studies have demonstrated the insulating state, namely, very large resistance, which is, however, true for any insulator. We wanted to further demonstrate properties that are unique to Axion insulators and do not exist in regular insulators, such as diamond.”

The material forms a two-dimensional layered crystal structure, which allowed Ma and her colleagues to mechanically exfoliate atom-thick flakes using cellophane tape that can be found in most drug stores and supermarkets. Thin flake structures with even numbers of layers were proposed to be an Axion insulator.

Ma worked closely with fellow Boston College physicists Brian Zhou and Kenneth Burch. Zhou used a unique quantum technique to detect the magnetism of MnBi2Te4. Burch has a unique glovebox facility used to process the sample in an inert environment.

“We first characterized the layer number with optical methods and then performed electrical transport measurements, such as measuring the sample resistance under different conditions, including varying electric field, magnetic field, and environmental temperature,” Ma said.

The researchers found the Hall effect, a well known law of physics where electrons travel at an angle from the axis under the influence of an applied magnetic field. Only these electrons were traveling without such assistance, Ma said. The key was the materials’ topology, or the quantum characteristics of its electrons and the waves in which they function.

“We observed a novel property for electrons travelling across this material in its Axion insulating state: The electrons do not travel in a straight line; instead, they deflect to the transverse direction. This effect was usually only observed under a large magnetic field, known as the Hall effect,” Ma said. “But here, the deflection occurs due to inherent topology of the materials and without external magnetic field. More interestingly, the electrons deflect to opposite sides on the top and bottom layers. Therefore, we coined it as the layer Hall effect. The layer Hall effect serves as a distinct signature of the topological Axion insulating state, which will not happen in regular insulators.”

Ma, whose research on the project is supported by the U.S. Department of Energy, said the team was surprised to find that the topological Axion insulating state and the layer Hall effect can be effectively controlled by the so-called Axion field, which is the product of applying both an electric field and a magnetic field.

“This means that whether the electrons deflect to the left or to the right on the top and bottom layers can be switched by the collective application of the electrical and magnetic fields,” Ma said. “A single field is not able to switch one situation to the other.”

Harvard University Assistant Professor of Chemistry Suyang Xu, a lead author of the report, added, “We are very excited about this work because it demonstrates the first realistic platform for the topological Axion insulator state.”

Ma said the identification of the topological Axion insulating state leads to the next step of searching for signatures of the defining Axion dynamics in this system, which is known as the topological magnetoelectric effect (ME).

“The topological ME effect is a fundamentally new mechanism to convert electricity to magnetism, or vice versa, without lost energy, and has great potential to realize ultra-energy-efficient spintronic and memory devices,” said Ma.

To demonstrate such will require further optimization of the material quality, the geometry of the device, and expanded experimental capabilities, Ma said.