Researchers have been working to sequence the genomes of the world’s birds—approximately 10,000 species in all. They recently achieved a new milestone when they added 267 genomes to the nearly 100 that had been catalogued previously.

Among the researchers who helped assemble the genetic profiles and published their findings in the prestigious journal Nature was Boston College evolutionary biologist Jeff DaCosta, who each year teaches hundreds of undergraduates as an assistant professor of the practice and whose research focuses on the biology of birds.

DaCosta is part of a team that sequenced and assembled the genomes of the brown-headed cowbird, of North America, and the village indigobird, a type of finch that is distributed in Africa. DaCosta has been studying the village indigobird for more than a decade, including field work in Tanzania for his Ph.D. research at Boston University. A few years ago, he began studying the brown-headed cowbird. Both are among a fascinating group of birds, called brood parasites, that abandon their eggs in the nests of other species, leaving them to be raised by unknown foster parents.

“This is a milestone in avian research,” said DaCosta, a co-author among the international scientists who compiled the report “Dense sampling of bird diversity increases power of comparative genomics,” published in November. “This was a huge collaborative effort and I was glad to have played a small part.” 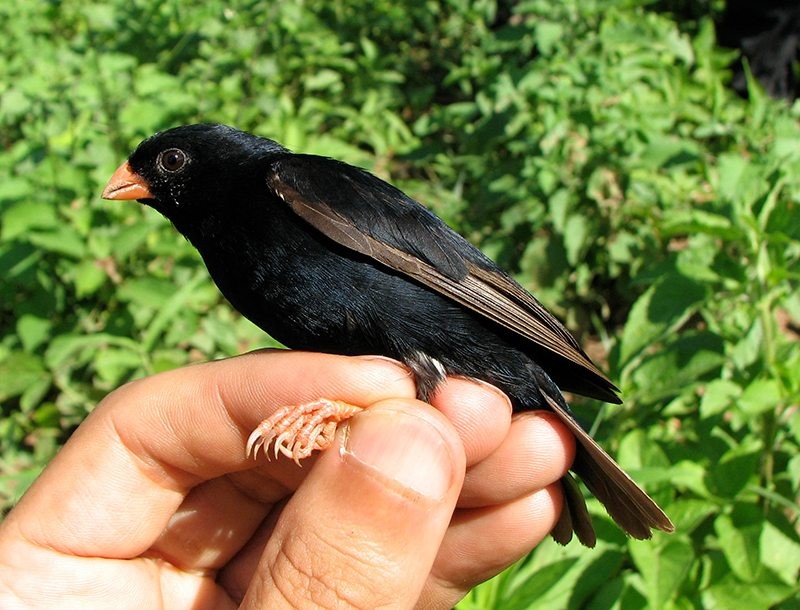 DaCosta has been studying the village indigobird (pictured here) for more than a decade.

Hundreds of researchers from around the world contributed to the report, the latest from the Bird 10,000 Genomes Project, also known as B10K. To date, the 363 genomes sequenced represent 92.4 percent of all bird families.

The project was powered by new technologies that allow researchers to sequence and analyze massive amounts of genetic data. The typical bird species genome comprises about 1.2 billion base pairs of DNA, and each stretch of the genome needs to be sequenced multiple times to be confidently reconstructed.

By assembling the genome of a species, researchers have access to a set of tools that can help better understand the evolution of birds, said DaCosta.

They can examine questions that include determining which part of a genome is responsible for traits shared among species, or those that separate species. The B10K project broadens research opportunities, he said.

“All of these genomes are now publicly available,” said DaCosta. “They are there now for any biologist anywhere in the world to download and to start investigating the questions they are interested in.”

As an evolutionary biologist, DaCosta said the advances in technology and science represent the latest iterations of discovery since Charles Darwin’s foundational observations and insights were revealed in his 1859 book The Origin of Species.

“Darwin formulated the theory of evolution by natural selection before DNA was discovered,” said DaCosta. “I think he would be blown away by how much we have learned since then. This is the great thing about science: it is ever changing and we are always accumulating new knowledge. To not only understand what exactly is passed from parent to offspring, but to collect DNA sequence data, string it together, and analyze it would be incredibly exciting for Darwin. These new capabilities are beyond the scope of his broad vision of biology in the 1800s.

“This is the great thing about science: it is ever changing and we are always accumulating new knowledge.”

Jeff DaCosta, Assistant Professor of the Practice of Biology

“He did amazing work and thought so deeply about so many things,” DaCosta added. “Scientists of any generation are somewhat bound by the technology of their day. Although Darwin did amazing work, technology now affords a different understanding of biology compared to his day. But the same can be said of someone now studying genomes when compared to people doing this work only 20 years ago. The field is quickly changing.”

DaCosta said there remain many mysteries surrounding birds, from navigation to reproduction. The database could help determine how other factors, such as climate change, are affecting birds, he said.

“Data compiled by these scientists could be used to compare birds that appear to be doing better or worse in the face of climate change,” he said. “We can look to see how they adapt to living in an aquatic habitat versus the high mountains, or deserts versus rainforests. There’s a lot of be learned still, but this is a major step forward.”